His rivals had been painted mustache, goatee and some horns. To him, a black tie and a message: rest in peace. A phrase that in another country, in the middle of the electoral campaign, can be a macabre joke, but in Mexico these days it means a real death sentence. Three weeks after they tried to shoot him to death, the PRI candidate for mayor of Morelia (Michoacán), Guillermo Valencia, moves with a bulletproof vest, in an armored truck and surrounded by four men armed to the teeth. When a neighbor comes to greet him abruptly in the street, he feels his stomach rise into his throat, his muscles contract and he can only smile. The lead law has been imposed in an electoral contest in which the most basic democratic rules have been blown up.

The electoral process has become the most violent in the recent history of the country. At least 35 candidates have been assassinated since September – according to the latest figures from the consulting firm Etellekt, registered up to May 30 -, mostly for municipal positions, and more than 782 attacks have been recorded, including death threats, in addition to those that for obvious reasons have not been reported and remain in the shadows. Mexico looks to an election next Sunday in which at least a dozen candidates have withdrawn from the race due to threats against their lives or that of their families; for more horrible reasons, such as murder or kidnapping; because they have shot at her house, her cars or her field posts, or because her dismembered husband has been thrown into a gutter.

Against this background, President Andrés Manuel López Obrador insisted this week that the country “is at peace” and there are sufficient elements to “guarantee governability.” The image of corners of the country in crisis of violence on the brink of the largest elections in its history – where up to 2,000 local positions are elected, the federal Chamber of Deputies is renewed and 15 governors are elected – is for the Government little more than a media hype. Although for its part, the National Electoral Institute has announced that in at least 40 municipalities it is possible that residents cannot even vote because there are not sufficient security conditions to install a polling place. Such is the case of Aguililla (Michoacán), the epicenter of the cartel war for months.

From the moment a candidate for mayor of his city has to campaign with a bulletproof vest to wage a second bullet attack — and it is not the only one in the country — democratic guarantees vanish. Guillermo Valencia, Memo, as he likes to be called, faced since last May 8 the macabre dilemma of continuing to risk his life in a leaking democracy.

“Now that they tried and didn’t kill me, am I going to give them the pleasure of retiring?”

It was around nine at night when a car with three hit men intercepted Memo Valencia’s truck. A last minute plan saved him from almost certain death. He was meeting a friend at his house to watch a boxing match and before his attackers knew it, he had changed vehicles. The truck with his face and his name went straight down one of the main avenues of the capital of Michoacán. On board were one of his bodyguards – as a threatened activist, he had federal security for years – and two colleagues from his campaign team. A car blocked their way and two men got out of the vehicle and started shooting, another followed them from inside. The truck was like a sieve: punctured by 31 impacts. An assistant and the bodyguard were wounded in the leg. None of them have wanted to continue.

This Wednesday, Valencia repeats the tour of the night of the attack and observes the poster with the threat of death on the esplanade of a popular neighborhood in Morelia, the place where the last electoral event of that day was held. While he notices the canvas with his face and the black tie, a group of four escorts and a driver surround the candidate, a pistol at his waist and two assault rifles ready in the truck. “It is very difficult to campaign like this. The logical thing to do when they try to kill you is to hide you, but I have to go out, talk to people, walk. Anyone can come up with a gun and shoot me. It’s the risk ”, he says from his living room. To one side, her two daughters, two and six years old, say hello shyly. His wife watches him resigned: “I can’t stop crying. But I respect him a lot and support him ”. 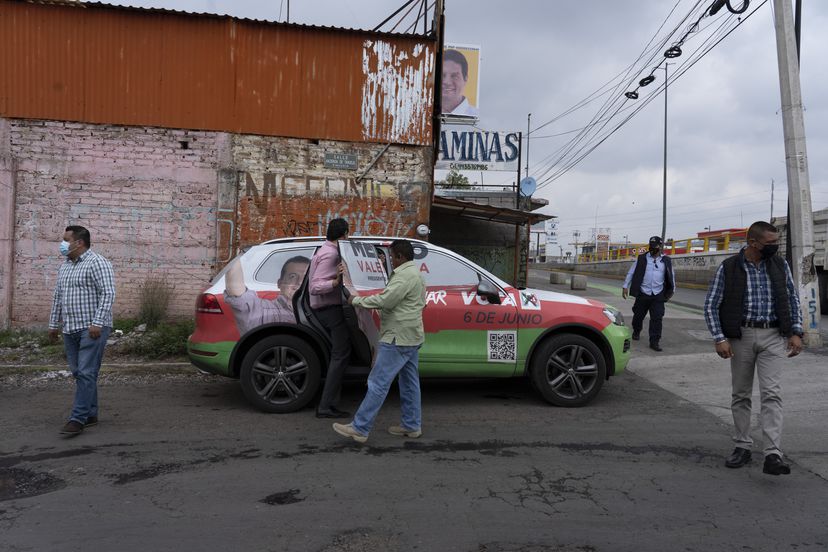 The candidate Guillermo Valencia guarded by his security team. | On video, an account of the violence reigned throughout the electoral campaign. Photo: Mónica González | Video: EPV

A friend has lent him an armored car in which he travels his last hours of the campaign, behind him goes the convoy of armed men that dodges the traffic and drives ready to clear any suspicious vehicle. Valencia speaks from the back seat of the car and as he does so he keeps track of one window and the other, waiting for the moment when what he thinks is written on his forehead will happen: “I am aware that I smell like gunpowder,” he says , pounding hard against his Kevlar-caped chest.

“Did you see the video of the Moroleón? Perhaps with one like these I would have fought it ”, Valencia warns. A few hours earlier, the video had been made public in which Alma Barragán, candidate of the Citizen Movement for mayor of that Guanajuato municipality (60 kilometers from Morelia), was riddled with bullets while speaking at a rally surrounded by dozens of people . In the images you can hear the detonations and how a shot hits him directly in the chest. Also, that same week, the Green Party candidate for mayor of Uruapan (Michoacán) had been kidnapped. And that Wednesday afternoon, the news opened with the kidnapping of the candidate for the municipal presidency of Cutzamala de Pinzón (in Guerrero), Marilú Martínez, and her entire family, who appeared a few hours later alive.

The alarms that these were going to be the most violent elections were triggered with the murder of the candidate of the Citizen Movement for the municipal presidency of Cajeme (Sonora), Abel Murrieta, on May 13. Murrieta was the lawyer for the LeBarón family, which in November 2019 was the subject of a brutal attack in which nine of its members, women and children, who were traveling in vans through Chihuahua, lost their lives. His death, in one of the key states in these elections – where López Obrador’s former Security Secretary, Alfonso Durazo, is running for governor – sparked outrage and made dozens of more crimes against candidates in marginalized areas visible.

The phone rings: “Sorry, the number you are trying to contact has the incoming call restriction service.” Érika Cortés, from the Labor Party, was a candidate for the Veracruz municipality of Cuichapa until she announced in a video on her social networks that she was retiring. The death threats against her and her family forced her to resign and these days she is away from the spotlight, waiting for the hell that began the day she ran for mayor of her town to end. “Not even we can talk to her,” says a fellow state party.

About 50 kilometers from there, an official of the electoral body of Veracruz, in the poorest town in the state, Mixtla de Altamirano, announced that there was not enough call for the expected debate for municipal president to take place. Francisca Morales (from the PRI) had withdrawn from the race a week and a half ago. Her husband (former mayor of the municipality) was kidnapped, murdered and his dismembered corpse was thrown into a gutter.

Veracruz has been the state that has suffered the most attacks on candidates in this electoral process, of the 782 attacks, 117 occurred in this state. And one of the state representatives of the PRI explained by telephone to this newspaper that only on that day, Tuesday, they had illegally detained one of his companions, had violently evicted a demonstration and had just riddled with bullets a former member of the PRI, who This time he was running for the PAN for the mayor of Yanga, Gerson Morales.

Valencia marks the exact point where the truck with the labels of his campaign stopped and changed vehicles. “If I had gone home that night …” he does not finish the sentence. If he had gone straight back to his family and not to see a boxing match – “I didn’t even love boxing, it was to see my friend” – they would have killed him. The men firing point-blank at the vehicle approached the front windows. “In the video you can see how one of them goes forward with a short weapon towards the glass. If the blast hadn’t hit me, it was going to finish me off ”. His injured partner opened the door and yelled that the candidate was not there. And while the escort tried to face only the bullets, the hitmen realized that they had missed the shot. And they fled.

The string of deaths and armed attacks has intensified as election day approaches. Without still being able to make a diagnosis of whether organized crime or white-collar political criminals have been responsible, for at least a month, there has not been a week in which new victims were not counted. “The country is at peace,” López Obrador insisted on Thursday. But event newspapers continue to reserve blanks before closing. Three days before election day, the question arises as to whether the country really attends freely and with full guarantees to elect its representatives. If in the face of extreme violence in some municipalities there is a decent space for democracy.