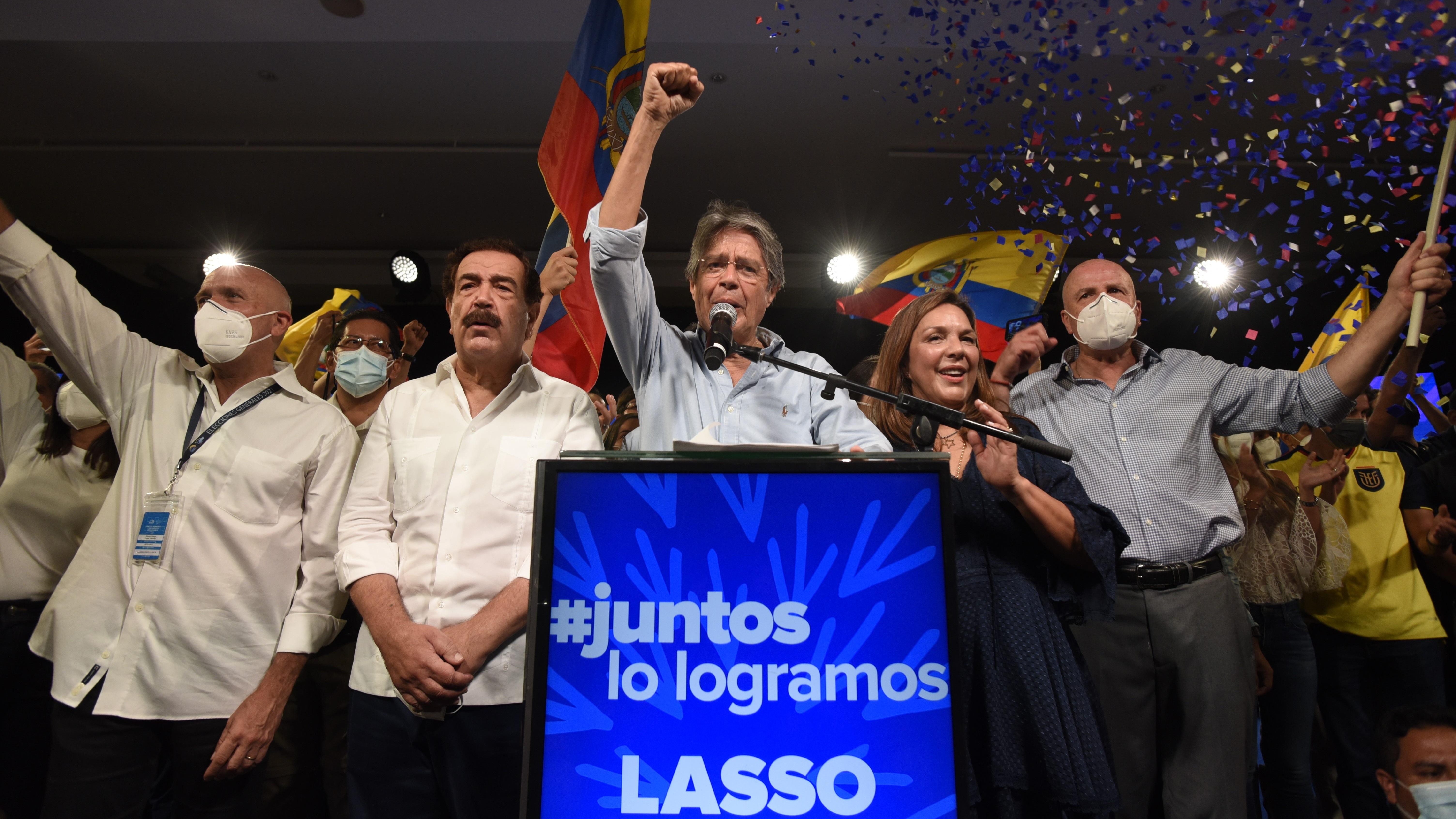 Guillermo Lasso has destroyed all the forecasts of the polls and will be the next president of Ecuador. When all the polls anticipated a close final with the correista Andrés Arauz, the conservative leader has won the second electoral round by five points of difference. With 97.6% of the ballot boxes scrutinized, Lasso got 52.5% of the votes, by 47.5% of Arauz, the man chosen by Rafael Correa to lead the return of his “citizen’s revolution” to the Andean country . The result has been a severe blow to the former president, who has followed the campaign from Belgium, the country where his wife is from. Prevented from returning to Ecuador due to a bribery conviction, Correa had gambled everything on Arauz, without success. Lasso’s triumph also has an enormous regional impact, because it slows the turn to the left that South America had started with Alberto Fernández in Argentina and Luis Arce in Bolivia.

“On May 24, we will take on the challenge of changing Ecuador with responsibility,” said Lasso, when the difference he had on Arauz had become irreversible. As Lasso spoke, Arauz accepted defeat from a hotel located in the center of Quito. “This is not an end, it is the beginning of a new stage. We were victims of persecution, of banning. It is easy to think that the division is only generated by the other, it is time for democracy, to end political persecution, “said Arauz, who did not forget the condemnation that weighs on Correa.

With this result, Lasso has added almost 33 points to the 19.7% he obtained in the first round, equivalent to more than 2.6 million votes. Arauz, just 14 points to 32.7% of the first shift. The anti-government sentiment of Ecuadorians has weighed on the election and, above all, the vote of those disenchanted with politics, who in the first round were for the candidate of the indigenist party Pachakutik, Yaku Pérez, and Xavier Herbas, leader of the Democratic Left. Pérez called in the second round to vote null, an option that rose from 9.5% to 19% this Sunday. But that hasn’t stopped Lasso from winning in 12 of the 13 provinces that Pachakutik won in the first round. The indigenous vote has not benefited Arauz the most, as expected.

It was a very quick count, made easier because there were only two options. When the exit polls anticipated a victory for Lasso, Arauz proclaimed from Quito a “resounding victory” in the main electoral districts of Ecuador. “Nothing has happened here, we knew that the banker [por Lasso] he was going to be the winner. When the official results arrive there will be no margin for error, ”he said. The official result, finally, confirmed his defeat.

The economy is everything

Lasso’s victory was the corollary of a quiet election day. It started on time at seven in the morning and ended on time at five in the afternoon. At the Benalcazar municipal school, a huge campus located in an affluent northern neighborhood of Quito, the line to enter was 200 meters, but it was moving very fast. The indications of the policemen were mixed with the shouts of the car-riders and those who offer to “plaster” [proteger con plástico] the proof of vote. In Ecuador, voting is mandatory and without that little piece of paper it will then be impossible to carry out any banking procedure and even rent a home. ”This time it was super fast, in the first round it took me two hours and now less than 20 minutes. You only have to vote for two people, ”said Monica, a 35-year-old civil servant after leaving the electoral college.

In this neighborhood of large residential buildings, offices and hotels, people vote for Lasso. It is enough to exchange a few words with the people for a speech against former President Rafael Correa (2007-2017) to emerge. Raúl Saltos, a 50-year-old publicist, however, has not voted convinced. “In Ecuador we have long voted for the least worst. It hurts me to say that, but in my country there is a lot of corruption, where you put your finger, something appears ”, he lamented. Monica Dellanón, a 57-year-old Central Bank employee, says she voted for Lasso because “we need a stable and dollarized country. “If not, we would be like Venezuela, without a currency,” he said.

The concern of the Ecuadorians consulted in the polling stations was recurrent: to improve the economy and promote employment. Both in the Central Técnico school (north), as in the Mejía School in the historic center and the Juan Pío Montúfar in the south of the city, their large central courtyards looked almost empty, while voters calmly approached the polls located at the gates of the classrooms. Juan Carlos Basrantes, an operator in a food company, says at the Technical Center that “the two candidates offer very little and we are financially very bad.” “The campaign was a fight between them and they never said what they intend to do with this country. They had to talk about us and they talked about their companies, ”he said. That has been the general spirit of the voters after a tour of the voting centers in Quito.

A similar climate was experienced in Guayaquil, the coastal city that is the political cradle of Lasso. Voters repeated as a mantra that the country needs a “change.” It was said by those who elected Arauz to recover what has been lost and also by those who voted for the conservative leader. “We need a good government, whichever one wins,” said Olga Córdova Valarezco, a 58-year-old woman who attends the Calicuchima fiscal college, in a popular neighborhood in northern Guayaquil. She is accompanied by her husband, Ángel Dávila Marín, 69 years old. They have risen early to avoid crowds. “It is one more vote, but an important one. We want to change, we are poor because of the pandemic and because of the politicians. We live in crisis after crisis ”, he reiterated.

At the foot of one of the main avenues of Guayaquil, the Simón Bolívar High School receives a constant stream of voters. By having the doors open, the large crowds of people who registered in the first round were not seen. It is one of the voting points with the most registered people. Marjorie Mercedes Yamuca Yagual, 19, has already voted and is accompanying her mother to fulfill her civic duty. He voted null in the first round and now calls for “a change and less corruption.” Silvia Yagual is 39 years old and has given Andrés Arauz her confidence, although in the first round she was not clear about it. “The candidates attack each other in the debates and each one promises one thing and another. Hopefully whoever remains as president is honest and keeps his word, ”he hopes.

The economic question is key. But the new president will also have a great political challenge. Lasso will have only 12 legislators in the Assembly since May, against 49 of the correísmo. The key will be in the 27 assembly members of Pachakutik and the 18 representatives of the Democratic Left of Xavier Herbas. The policy of agreements will be the key to governance in Ecuador.