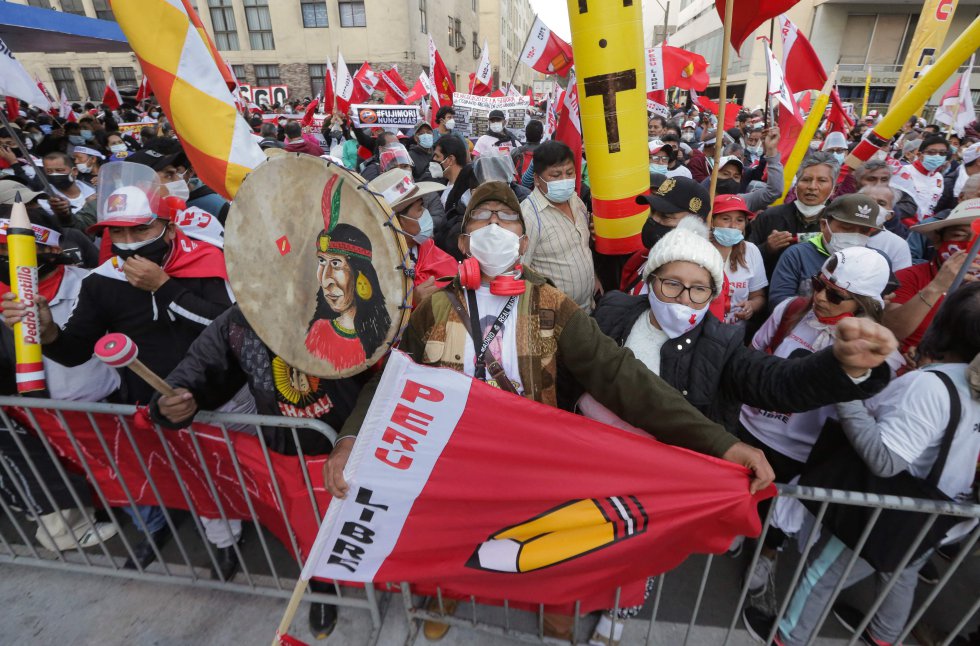 Katy Azula, 45, rubs her eyes in front of a coffee. She is sitting at the table in a modern coffee shop in Lima. An avant-garde eight-shaped lamp hangs from the ceiling. “I’ve never been so depressed,” she confesses. He has slept little. He has spent the night updating the website of the electoral body that reports in real time the vote count that will decide the arrival to the presidency of Peru between the leftist Pedro Castillo or the conservative Keiko Fujimori, two populist candidates whose election has polarized the country .

Azula, a hotel manager, has the profile of a Castillo voter. He was born in Chota, a city in the same mountain region where he comes from. His parents were teachers, like him. He believes in effort and education as a formula for progress, something that has often been mentioned by the candidate who has campaigned with his head covered by a palm hat and a giant pencil in hand. However, Azula voted for Keiko Fujimori. He does not believe in the economic statism that Castillo proclaims. “I went in, voted and got out as quickly as possible. I don’t want to remember this passage in my life, ”he says, as if confessing a crime.

He was always anti-Fujimori, since the nineties. He swore that he would never support someone with that last name, which represents authoritarianism and corruption for many Peruvians. But on Tuesday night he loaded the internet with the hope that Keiko Fujimori would manage to overcome Castillo at the last minute. “She already lost. It must be said with all the letters ”, he adds. The wait until that moment is official is proving torturous. Azula has deleted friends and family from her social networks who have been carried away by the passion of the moment.

The country’s economic elites have campaigned for Fujimori without dissimulation. The arrival of Castillo, for some, means the advent of a kind of chavismo to the Peruvian. He has tried to chase away all those fears. He has campaigned from the margins and against the establishment. According to the count, he is one breath away from donning the presidential sash. His followers have come en masse to Lima, the capital, the center of power, from the provinces and the most remote areas of the country with a smile on their lips.

Nancy Cabrera, owner of a grocery store, arrived this Wednesday morning by bus to the big city. “We are not going to allow our vote to be stolen. The corrupt have been entrenched for 30 years. He is a teacher, union leader, farmer, humble. He is going to watch over the mountains ”, he tells about mountainous places, which are often poor even though there are gold mines in the surroundings. That foreign extractive companies better compensate the inhabitants of those areas has been one of Castillo’s demands.

His followers have been stationed around the headquarters of his party since Sunday. Sometimes he looks out on the balcony and people go crazy. Castillo is not a brilliant speaker, but that gives him a certain authenticity that makes him connect with people. Castillo is often said to be a mirror of his voters. Their rallies have been the most massive. Marta Celi, a lawyer from Carabayllo, a district of Lima where a flood of immigrants arrived from the jungle and mountains, including Castillo himself, who sold flavored ice cream there, sleeps in the open in front of the National Elections Jury, the organ which will decree the official winner. “I am tired of so much inequality and injustice in my country. We are from a humble place with many needs for water and services ”, he explains. Nearby, a giant portrait of Castillo in a suit and tie, without a hat. That is his future image of president. “We will wait here until the result is known. Until he wins.

Outside a supermarket, a Quechua-speaking woman carrying her baby on a blanket on her back makes a living selling sweets in an affluent district of Lima. Who did you vote for? “By Keiko,” he replies. And because? The young woman laughs nervously and asks a relative in her mother tongue, as if asking what to answer. “Because it is going to work well,” he says. And why not the other candidate? “Because it is terruco, they say, a terrorist,” he adds. The citizen dressed in the Andean fashion, with a skirt and a braid, repeats one of the false versions against Castillo: that he was linked to remnants of the Shining Path terrorist group or with those who served time for terrorism and got out of prison.

Downtown Lima has been turned into a theme park with Professor Castillo as the main character. A man wears a woven wool cap with ear flaps. A four-letter word crosses the hat from end to end: “Peru”. He has been at a crossroads all afternoon selling merchandise from the man who is on the lips of all Peruvians, Pedro Castillo. In a country where people named Kuczynski, Fujimori or Humala have ruled lately, his is the one that sounds the most common. If the provisional result is confirmed, Castillo will add his to that list. The vendor shows passers-by T-shirts, headbands and pennants with the rural teacher’s face.

Business is good. The character is on the rise.

However, a young boy interrupts his customer acquisition:

The merchant plays deaf and goes about his business.

“I’m in the import business,” the boy insists.

Continue without paying attention to it. Until he can’t take it anymore:

“Well, young man, well,” she encourages him to leave.

Peru is immersed in a dialogue of the deaf.