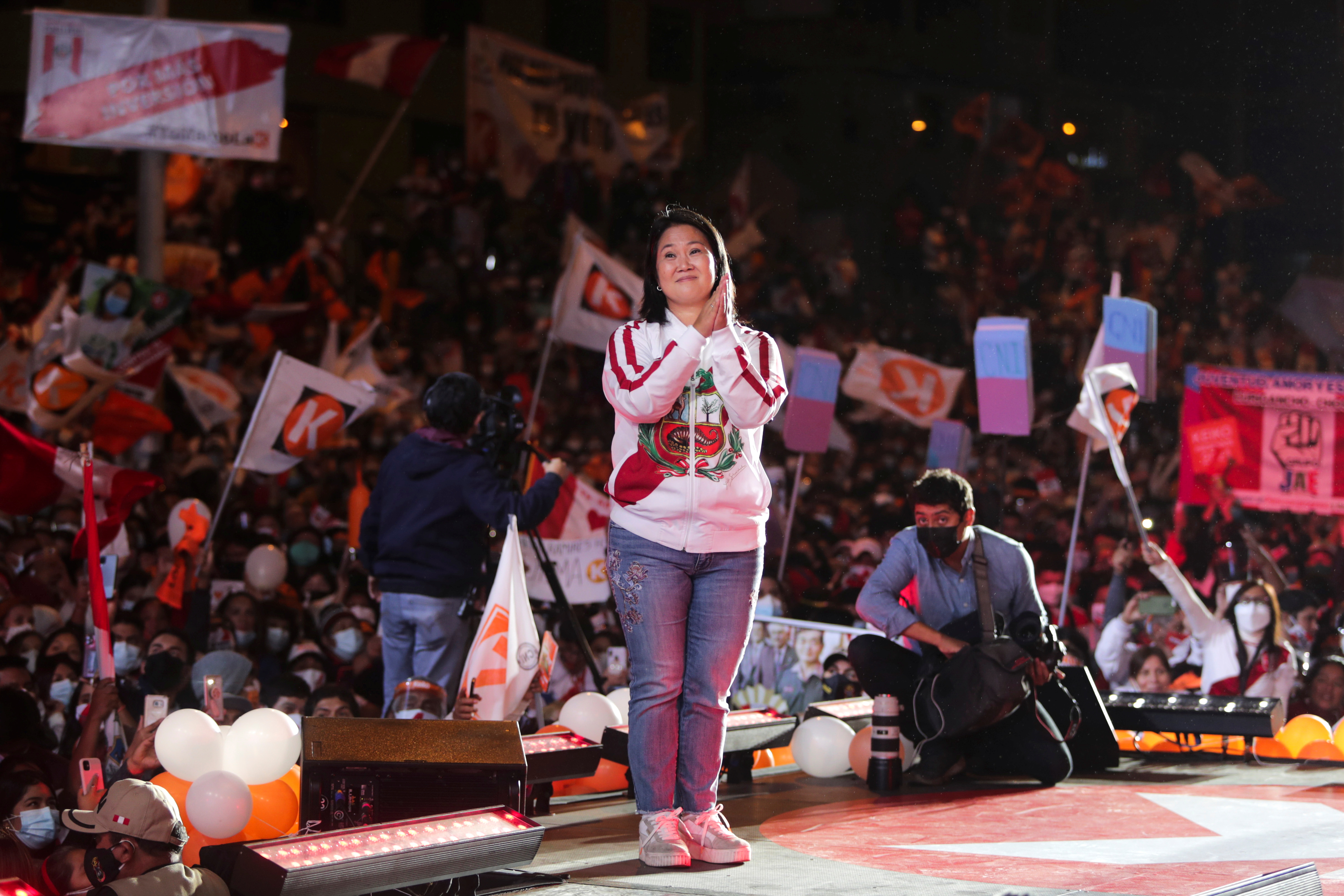 If reconciliation, as Amos Oz wrote, is not a miracle, but a slow and gradual process of mutual discovery, it is the path that Keiko Fujimori (Lima, 46 years old) has chosen to try to better understand and understand the enemies that are he has raised his family for the past 30 years. Fujimori, in the final stretch of the electoral campaign with which for the third time in a row he tries to take over the presidency of Peru, a position his father held in an authoritarian manner between 1992 and 2000, has kept the classic Fujimorists in the closet . The front ranks of his rallies are now occupied by some of his fiercest opponents.

Fujimori has spent the last few weeks apologizing for past mistakes. “I apologize to each and every one of those who have felt affected by us (by her and her party, Fuerza Popular). I do it with humility and without any reservations because I know that there are still many doubts about my candidacy, ”he said at a ceremony in the city of Arequipa, where he signed a democratic commitment on Monday. Unlike his father, he assures that he will respect the Peruvian institutional framework.

Keiko Sofía is the eldest of the four children of Alberto Fujimori, sentenced to 25 years in prison for crimes against humanity and corruption. Disciplined, methodical, from a very young age she had to assume great responsibilities. The father fled, estranged from the mother, assumed leadership of the family. In 2011 she ran for the first time as a candidate. She was only 36 years old, one over the minimum age to be president of the country. With a speech in which he claimed the inheritance of Fujimorism – authoritarianism and the strong hand against terrorism by the Shining Path – he managed to go to the second round, where he lost against a retired military officer, Ollanta Humala. Fujimori believes that it was decisive that the writer Mario Vargas Llosa supported Humala at the last minute.

Five years later, in 2016, he tried again. Then he distanced himself from one of the figures that had surrounded his father. A symbolic patricide. It was the most voted in the first round, with 40%. Victory seemed his. The past, however, weighed heavily on him. The antifujimorismo did not pardon her and in the second round she was defeated again, this time by a banker and former Conservative minister named Pedro Pablo Kuczynski. With a majority in Congress, Fujimori’s party made a very aggressive opposition and turned Peruvian political life into a continuous mess. Keiko always believed, according to those around him, that his elections had been stolen. Either she was the boss or no one else.

Also Read  'The Island of Temptations', 'Blood Ties' and 'Lego Masters' compete today for the audience

That obstructionist attitude seemed to have buried his political career. The first electoral polls placed it in sixth place facing the first round of 2021. Going to the second seemed impossible. However, the fragmentation of the Conservative vote worked in their favor. He only got 13% of the votes, but it was enough. In front of him, another candidate has been found who, for being different and exotic, can help him with his purpose. Pedro Castillo, a leftist rural unionist and teacher, represents communism and Chavismo for her, although Castillo has assured that this is not his path. Around the idea that Peru is at stake even falling into the hands of a dictatorship -something of which there is no evidence-, it has received the support of some of its historical enemies, such as Vargas Llosa. Keiko will only win if she really succeeds in attracting a large part of the Anti-Fujimorists.

Nobody represents that current better than the Vargas Llosas. Since Alberto Fujimori defeated the writer at the polls in 1990, there has been a tough and stormy confrontation between the two families, an almost bitterness shakesperiano. Surprisingly, the Nobel Prize for Literature has now blessed the autocrat’s daughter. “This is a serious moment in the history of Peru. We are not going to choose a person, but a system, ”Álvaro Vargas Llosa, the Nobel laureate’s eldest son, explains by phone. At the closing of the Fuerza Popular campaign, Álvaro grabbed the bus and addressed the crowd: “To everyone who calls me a traitor on the street, they tell me why I support Keiko, I answer them: Keiko, president! Keiko, president! Keiko, president! ”.

Reconciliation between the two families should be the example, believes the candidate, that Peru can face the future with harmony and unity, in a kind of democratic transition. This thesis has as its starting point the search for institutional stability in a country that has had five presidents in five years, all men. More: all the presidents-elect since 1985 have starred in some case of patronage and corruption.

All that burden from the past that she previously hid under the rug is now the main engine of her campaign. In the last debate against Castillo, she recognized that, precisely because of this, because she was the daughter of someone with stained hands, she could not fail the Peruvians. Days later he apologized for the parliamentary work of his party in the last legislature: “We were not up to the task.” Later she apologized to the former Minister of Education Jaime Saavedra, whom she dismissed with a good majority in Congress because she was against the gender approach in schools. “It was an excess,” he now admits. By now she has become an atypical candidate. At a time when other politicians are struggling to display euphoria and good intentions, Keiko displays contrition.

Penance has been triggered in the polls. He has cut 20 points from Castillo since the start of the season, reaching almost a technical draw. On the way he has approached his brother Kenji, the little one, the father’s favorite. They had not spoken to each other for two years. Kenji reproached his sister for having denied the patriarch in 2016, when she said she would not pardon him if he came to power. This rapprochement between the two seems to have patched up the coexistence of a dysfunctional family.

“Not in my worst nightmares did I imagine supporting Keiko,” says Pedro Cateriano, former Defense Minister during the Humala government. Fujimorism later persecuted him judicially. A few days ago, she received an invitation from the leader to attend the campaign closing rally in Lima. He accepted it. “I trust you to keep your word. It is not blind faith. She has to continue taking steps and so far she is going in that direction ”, he adds.

The image of the cold and distant Keiko who became first lady at 18, when Alberto Fujimori divorced Susana Higuchi (both children of Japanese immigrants), has faded. He has campaigned with the shirt of the Peruvian soccer team and his answers are not accompanied by the doses of arrogance that are assumed. When Castillo asked her to debate outside the Santa Mónica jail, a women’s prison in Lima, she replied: “She does it to humiliate me.”

She spent 13 months locked up in Santa Monica in 2018 for the investigation of a prosecutor accused of money laundering, among other crimes. Away from her two daughters and her husband, an Italian-American named Mark Vito Villanela with a tendency to melodrama -he televised a hunger strike at the door of the prison-, the candidate assures that behind bars she reflected on the imprint of her surname in the history of Peru. “It has taught me a profound lesson. That is why I apologize to those affected (by Fujimori). I do it with humility and without reservation ”, he said about that time. A petition for 30 years in prison for criminal association still weighs on her.

Political analyst José Carlos Requena maintains that this latest attempt to assault the power of a Fujimori has something of a jubilee, with a candidacy that turns out to be a meeting between old Fujimori and new faces. A mix between the candidacies of 2011 and 2016. “Keiko has managed to reconcile with old adversaries,” Requena explains, “but I have the feeling that it was more by the will of the old adversaries than by herself. They have asked him for some gestures and he has had to do them ”. He doesn’t know if that will be enough. “She didn’t expect to be in the second round, and there she is. Perhaps she has left her comfort zone too late, from which people like Cateriano or Vargas Llosa have taken her. We will see if it reaches him ”.

Keiko was wearing a beige suit the day she asked for forgiveness in Arequipa. When he left the lectern, he went to hug Álvaro Vargas Llosa and the Venezuelan opponent Leopoldo López, who had traveled from Madrid to give him his support. When the event ended, a lady in the audience shouted: “Long live the Peruvian woman!” He was referring to her, of course, at the moment there is no other woman in Peru. Keiko got excited. The question is whether those tears are just a miracle or a real process of discovery of the others, the non-Fujimorists.