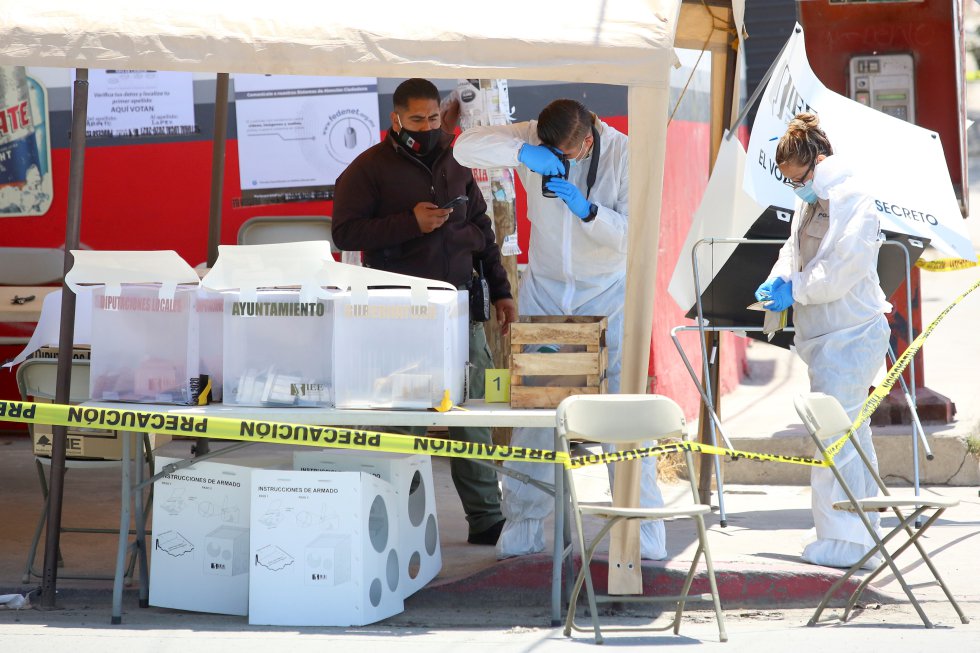 After a rather harsh electoral campaign, Mexico has voted in relative calm, pending isolated episodes of violence in some of the contending states. With 35 candidates assassinated and hundreds of aspirants attacked, the campaign of these months has been one of the bloodiest in remembrance, especially in entities such as Veracruz, Guanajuato or Guerrero.

Given the antecedents, the electoral day has been calm. The National Electoral Institute (INE) has installed more than 99% of the polling stations that it had planned throughout the country and has only suspended voting due to violent events in six, in municipalities of Puebla, Michoacán, Baja California and Oaxaca. Until Sunday night there have been no news of attacks against candidates, except for one case in the Serrano municipality of Badiraguato, in Sinaloa. Unofficial reports collected in the local press indicate that a criminal group had kidnapped the brother of a candidate for the municipal presidency, who had decided to withdraw from the race.

The state with the greatest problems has been Oaxaca. In Santiago Laollaga, on the Isthmus of Tehuantepec, the voting booths were installed late, due to disturbances between groups linked to political parties. Morena supporters clashed with followers of the PRI, PAN and PRD coalition, a confrontation that left at least one dead. In addition, shots were registered. 40 kilometers away, in Santa María Xadani, the violence that has characterized the latest electoral processes in the municipality has appeared again, causing the suspension of the vote. Apparently, residents of the municipality burned ballots after armed hooded persons appeared when electoral officials tried to install the polls.

In Chiapas, an armed group attacked a truck on Saturday in the municipality of Pueblo Nuevo Solistahuacán, about 120 kilometers from Tuxtla, the capital. The passengers were reportedly carrying electoral material. Five died in the attack and one would have survived. According to Chiapas Paralelo, the victims are members of the Independent Central of Agricultural Workers and Peasants (CIOAC), an organization that defends peasants.

In Puebla, Baja California and the State of Mexico there have also been incidents. The most serious has occurred in Tijuana, before 10:00 am, when a subject left a human head next to a box. Shortly after, someone left human remains near the same polling place. In Puebla, a shooting interrupted the day near the financial district of Lomas de Angelópolis. Armed subjects fired shots in the air and left. In the State of Mexico, a group of violent individuals tried to stop the vote in the municipality of Metepec, next to the capital, Toluca. The National Guard detained 15 people.

In most cases there is hardly any official information. The Sinaloa prosecutor’s office has not given details about the alleged kidnapping of the brother of the Badiraguato candidate; the one in Baja California has not provided information on the case of the severed head. In Oaxaca, the investigating agency reported riots in Santiago Laollaga, but left doubts about its consequences. “There are reports of a person who died as a result of the beatings,” the agency explained in a statement.

Be that as it may, the election follows the pattern of previous years, violence has appeared, but it has not dominated electoral day. During the 2018 elections, when Mexico elected president and some governors among other positions, the vote passed normally, with the exception, perhaps, of Puebla. The capital of that State suffered episodes of violence, between accusations of fraud crossed between Morena and the PAN. In addition, two PRI militants died in altercations in the municipality of Chignahuapan.