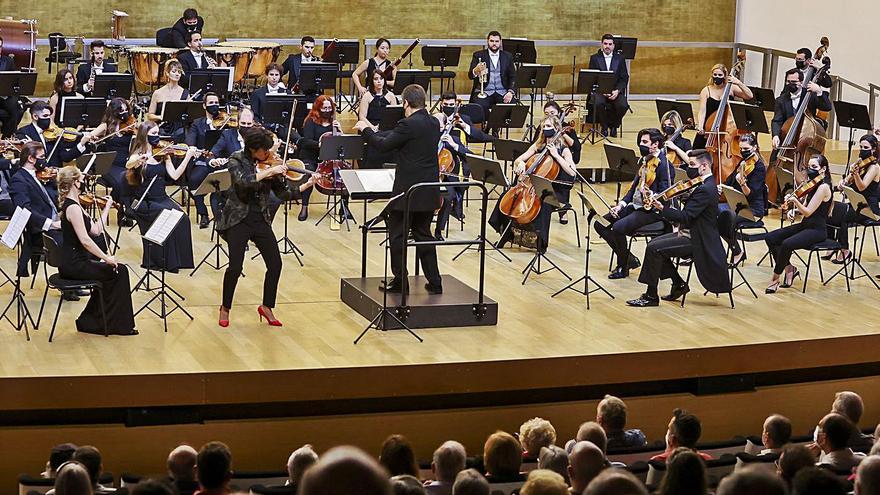 The violist Isabel Villanueva, during her performance. | HÉCTOR FUENTES

The title of this subscription program is Elegy, we suppose that due to the lyrical load of García Abril’s work (1933-2021) and the melancholic tone that contains the leitmotif of Kalinnikov’s symphony. Undoubtedly, Cantos de Ordesa – released in 2012 by ORCAM – is a kind of landscape impressions where the viola becomes a volatile body through which, from a bird’s eye view, it goes poetically through the Huesca orography outlining a descriptive trace of character. not naturalistic -it does not pretend to show us onomatopoeic gestures-, but to hypnotize us from an internal-intimate attitude, tracing with the compositional technique a visionary and personal microcosm. It is the first time that I have listened to Isabel Villanueva (Pamplona, ​​1988) and the truth is that her performance was interesting. It is noticeable that he has penetrated the aesthetic universe of Teruel and moves with freshness, sometimes discreetly, in the range of planes that the piece offers. Perhaps more resolute in the bucolic expressiveness than in the power of the seasoned passages. ADDA Simfònica, led by Manuel Hernández-Silva (Caracas, 1962), manages to create such a beautiful link with the sound of the viola that last night’s version was excellent.

The violist Isabel Villanueva, during her performance. | HÉCTOR FUENTES

The second part was the perfect combination of a maestro that I know very well and an orchestra that I have enormous appreciation for because, apart from having had the privilege of conducting it, it is projecting a wide-ranging artistic level outside our province. These are sufficient reasons to know in advance that the interpretation of the Symphony No. 1 by Vasili Kalínnikov was not going to leave the audience indifferent. What a beauty of music! How is it possible that it is not performed more frequently in the auditoriums of the planet? Maestro Hernández-Silva knew how to express all the romantic possibilities of the score and offered us a passionate, vibrant, energetic version. Kalínnikov’s debt to Tchaikovsky is more than evident. The cyclical structure of the work reminds us of the latter’s Fifth Symphony, as well as the tracing of its expansive and nostalgic melodies. All the Russian folklore dissolved in them, like wisps. Hernández-Silva, a good connoisseur of the romantic style, clearly combines the lyrical versus epic dichotomy, for example, during the course of the Scherzo, with a balance in the search for the right tempo between the allegro non troppo and the moderate assai. What possibly most attracts the attention of any performance is his work with the sound, the interweaving of the different sound planes, the planning of the timbral textures – I would like to highlight the enormity of some soloists such as the Alberto Menéndez horn or the Jorge Ripoll clarinet- , and the result of all this is reflected, precisely, at the end of the fourth movement where the metal wind performs a choral in fortísimo, using a precise and precious sound, which elevates us to a vibrant climax. By the way, the technical expertise of the woods and the rope during the denouement was magnificent. And, at the end of the journey, the teacher draws us one of his favorite moments: an outbreak of vitalism, a poem of the consummation -as Aleixandre would say-, one of those endings that end up resounding for a long time in the empire of the symphonic hall. The orchestra thanked the director for the invitation with its sound response; the public was seduced and ended up fascinated by such beauty. Congratulations, Hernández-Silva and Adda Simfònica, for this elegiac song from the heights.