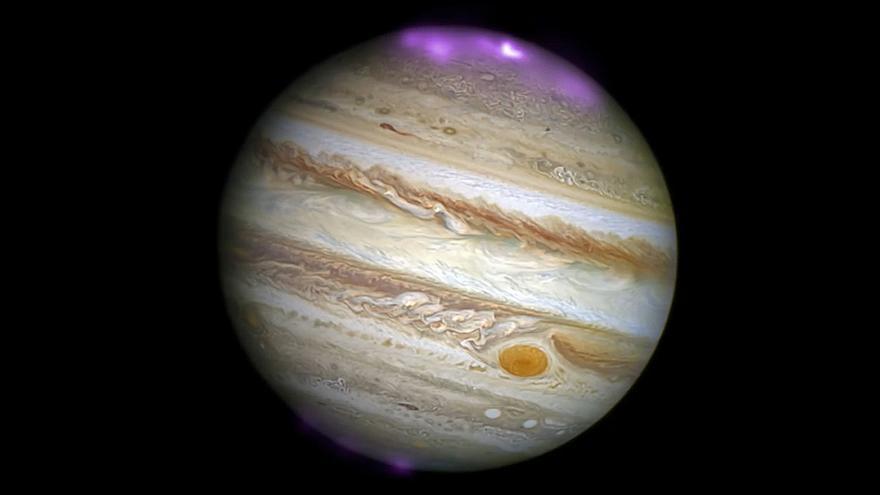 Jupiter has auroras caused by X-rays. For four decades, astronomers have wondered how they were generated, until have been able to observe completely and for the first time its mechanism, which could take place in many other parts of the universe.

Every few minutes Jupiter produces a spectacular X-ray burst due to charged particles interacting with the planet’s atmosphere.

A similar phenomenon occurs on Earth that creates the Northern Lights, but Jupiter’s is much more powerful., unleashing hundreds of gigawatts of energy, enough to briefly power all of human civilization.

A study published this Friday in ‘Science Advances’ accounts for the observations of an international group of astronomers who combined data from NASA’s Juno satellite, which orbits the planet, with simultaneous X-ray measurements from the Agency’s XMM-Newton observatory. European space, in the orbit of the Earth.

Astronomers have watched Jupiter produce X-ray auroras for forty years, but did not know how they are produced.They just happen when ions collide with the atmosphere.

The team, led by University College London (UCL) and the Chinese Academy of Sciences, discovered that X-ray flares are triggered by the periodic vibrations of Jupiter’s magnetic field lines.

These vibrations create waves of plasma (ionized gas) that send heavy ion particles “surfing” along magnetic field lines until they crash into the atmosphere of the planet, releasing energy in the form of X-rays.

One of the co-authors of the study, William Dunn, of the UCL stressed that they now know that these ions are transported by plasma waves, an explanation that had not been proposed before, although a similar process occurs in the Earth’s aurora itself.

Therefore, it could be “a universal phenomenonpresent in many different environments in space, “Dunn surmised.

X-ray auroras occur at Jupiter’s north and south poles, often with clockwork regularity: During the observation used to obtain data, the planet produced bursts of X-rays every twenty-seven minutes.

The charged ionic particles that hit the atmosphere originate from volcanic gas that pours into space from the giant volcanoes of Io, one of Jupiter’s moons.

This gas is ionized, that is, its atoms are stripped of electrons, due to collisions in the immediate environment of Jupiter, forming a kind of plasma donut that surrounds the planet.

The lead author of the study, Zhonghua Yao, from the Chinese Academy of Sciences, noted that now that they have identified that “fundamental process” of charged particles “surfing” waves of plasma there are many more possibilities to study it in the future.

Similar processes could also occur, the researcher estimated, on Saturn, Uranus, Neptune and probably on exoplanets.

While on Jupiter the magnetic field is filled with sulfur and oxygen ions that are expelled by the volcanoes of Io, on Saturn the moon Enceladus launches water into space, filling the planet’s magnetic field with ions from the water group.

The process observed on Jupiter bears great similarity to ionic auroras that occur on Earth, where the ion responsible is a proton, which comes from a hydrogen atom, but the process is not energetic enough to create X-rays.

To conduct this research, the team analyzed observations of Jupiter and its surroundings made over 26 days by the Juno and XMM-Newton satellites.

The researchers saw “a clear correlation” between the plasma waves detected by Juno and the X-ray auroral flares at Jupiter’s north pole recorded by XMM-Newton.

The next step was use a computer model to confirm that the waves would propel the heavy particles into Jupiter’s atmosphere.

What is not yet clear is why magnetic field lines vibrate periodically, but it could be the result of interactions with the solar wind or high-speed plasma flows within Jupiter’s magnetosphere.