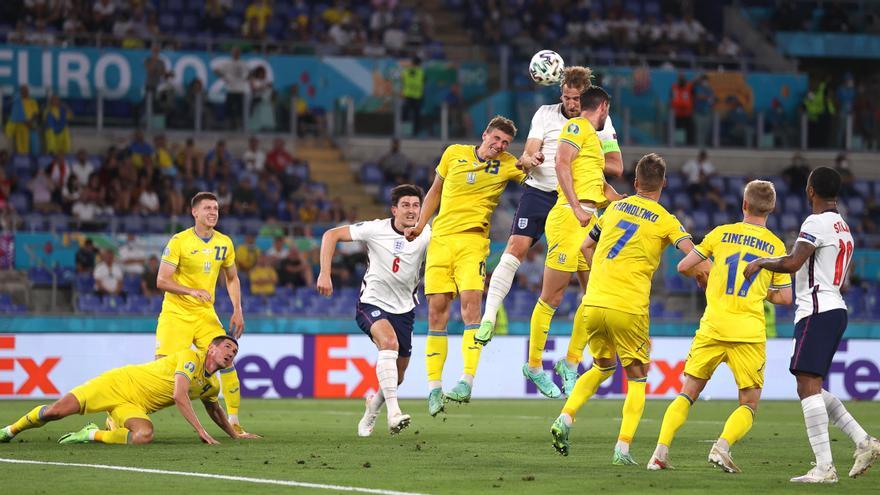 The England’s team ran over Ukraine’s team this Saturday with a resounding 4-0 at the Olympic stadium in Rome, in a match decided by a double by Harry Kane, already the top scorer of his team with three goals, and goals by Harry Maguire and Jordan Henderson, which allowed him to meet Denmark in the semifinals of the Eurocup.

The “Three Lions” team strengthened his candidacy and nurtured a country’s dream of winning a great trophy again international after the 1966 World Cup, the only one of his record. It would be the first European Championship in English history, after third place in the 1968 edition and the 1996 semi-finals.

Gareth Southgate’s men added to their defensive impermeability, with Jordan Pickford still unbeaten in five games, a more offensive attitude that allowed them to shield their place in the semifinals without messing up their place, which will play as favorites, at home, to surprise Denmark.

After breaking the curse against Germany in the round of 16, England activated the automatic pilot and triumphed with authority in the Olympic, in the first game of his Eurocup played away from the Wembley fort. He could not count on the full support of his compatriots in the stands, but that did not prevent him from jumping onto the field to impose his technique and physical strength.

He showed it from the start, with a high pressure that put Andriy Shevchenko’s tactical drawing on the ropes. The English aggressiveness exposed the technical limits of the three defenders and prevented the talent of the midfielders, such as Oleksandr Zinchenko or Mykola Shaparenko, to ignite.

The Roman expedition to England could not have started better, with Sterling making a great personal play down the left wing, cutting and hitting a through ball that freed Harry Kane. Tottenham’s nine did not spare goalkeeper Georgiy Bushchan and celebrated his goal in front of the hundreds of English spectators, many of them residents of Italy, who managed to enter the Olympic.

Kane, Jadon Sancho, preferred to Phil Foden in the starting eleven, and Declan Rice were able to sentence Ukraine in the first half, but Shevchenko’s men had the merit of resisting. His commitment, cheered by some 2,500 Ukrainian fans who dyed the stands of the Olympic yellow, allowed them to grow with the passing of the minutes and get to question the unbeaten condition of goalkeeper Jordan Pickford.

The injury suffered by central defender Sergiy Kryvtsov was used by Shevchenko to make way for Victor Tsygankov, leaving the 3-5-2 and moving to a defense of four that added power to the lead. Roman Yaremchuk, with a stopped shot, and Zinchenko, whose shot was repelled by the English wall after a good choral play, they had in their boots the balls that could change the history of the match, or at least extend the life of Ukraine.

They did not succeed and football took its toll on them. Two minutes after the restart, in a set piece action, Harry Maguire signed with an authoritative header to 2-0 and left Ukraine touched. Two minutes later, Sterling activated Shaw with a heel pass down the left wing so that he hung the center that Kane sent to the bottom of the tights with another header.

The rest of the game was a monologue, with Southgate revolutionizing the eleven to make way for less common players, including the talented Jude Bellingham, 18, or Jordan Henderson, the Liverpool captain who needed just seven minutes to score, with another header, the 4-0 .

The show went from the field to the stands, where the English present sang their famous song “It’s coming home”, to feed their dream of getting their hands on an international trophy after 55 years of endless waiting.

The next step will be again at Wembley, against Denmark, while the hypothetical final would be against the winner of Spain-Italy.

Referee: Felix Brych (ALE). There were no reprimands.

Incidents: Match corresponding to the quarterfinals of the Eurocup played at the Olympic Stadium in Rome before about 11,880 spectators.