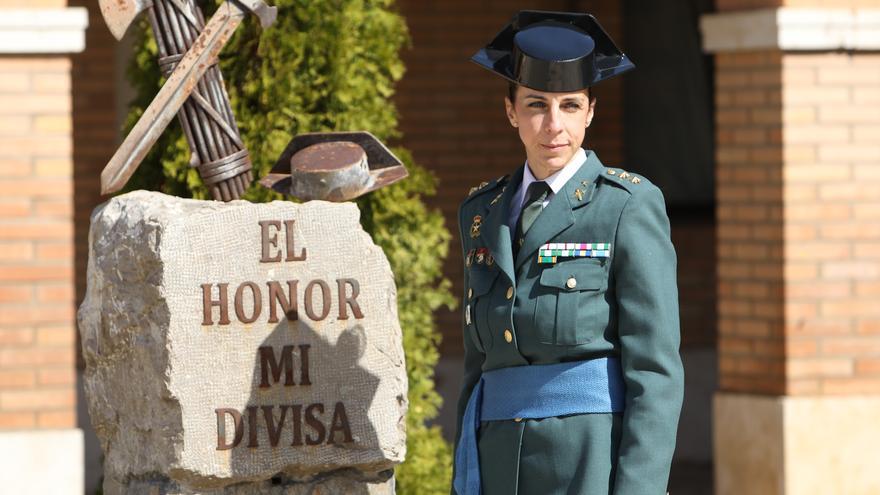 Gender equality and the demographic challenge will be the pillars that the new head of the Command of the Civil Guard from Teruel, Silvia Gil Cerdá, as he announced this Monday during his inauguration in the parade ground of the Teruel barracks.

The Prime Vice President and Minister of the Presidency, Carmen Calvo, presided over the act in which Gil Cerdá promised the position, together with the Minister of the Interior, Fernando Grande-Marlaska, the Secretary of State for Security, Rafael Pérez, and the director General of the Civil Guard, María Gámez.

“Today I take on a new challenge and I know that many people will be watching me, but know that the one who demands the most of me is me because the province of Teruel, its citizens and all the staff here deserve it,” said the new head of the Command of Teruel in his speech.

Gil Cerdá recalled that The Civil Guard must ensure that Teruel continues to be a territory where its inhabitants feel safe and has assured that she will put all her effort, effort and will to make it happen.

Likewise, it has indicated that the public powers of the State have the obligation to ensure that each person can choose where they want to live without fear of appearing to lack services and has specified that the province of Teruel is one of the largest in the country, despite its sparse population.

“Technological development, digital transformation and the need for gender equality, as a lever to attract 52% of the population, to women, to a new model of social and sustainable development, are fundamental for the Civil Guard and for rural areas “, Gil Cerdá has detailed, adding that the training of Civil Guard personnel is” getting better and better “. in technology and creativity.

The new head of the Teruel Civil Guard Command has concluded by highlighting the collaboration with the National Police, Assigned Police and Local Police, whose officials in the province have been present at the event, and recalling the memory of the two guards civilians killed by Norbert Feher in 2017 Víctor Romero and Víctor Jesús Caballero, as well as Traffic Sergeant Rafael García Blanco.

The Prime Vice President and Minister of the Presidency, Carmen Calvo, stressed that Gil Cerdá will be the first woman to head a Civil Guard Command and has considered that the position responds to her curriculum and her good work in the body.

“Teruel joins the name of Lieutenant Colonel Gil Cerdá, the name of all the women and all the men of the Civil Guard, and the name of a Spain that plays a lot in democratic values ​​and gender equality”, Calvo has indicated.

The Prime Vice President and Minister of the Presidency has highlighted from the province of Teruel its determination to keep its history and its trades alive and has ensured that the Civil Guard will keep tranquility in Teruel territory, as well as in all areas of rural Spain.

Lieutenant Colonel Silvia Gil Cerdá takes charge of the Civil Guard Command in Teruel, once assigned by the Secretary of State for Security, Rafael Pérez, at the proposal of the General Director of the Civil Guard, María Gámez.

Gil Cerdá was until now a commissioner in the United Nations Detachment in Colombia and obtained the job of lieutenant in 2001 after studying at the General Military Academy in Zaragoza and at the Civil Guard Officer Academy in Aranjuez (Madrid).

She has a Law Degree and a University Degree in Legal Sciences and Public Administrations, a Diploma in General Staff, a Master in Security, a Master in Gender Studies and a PhD candidate in Feminist and Gender Studies, among other courses.

In addition, he is in possession of various decorations such as Silver Cross and White Badge of the Order of Merit of the Civil Guard and Cross of Police Merit, and Crosses of Military Merit, Cross of the Royal and Military Order of San Hermenegildo among others, as well as the European Security and Defense Political Service Medal.