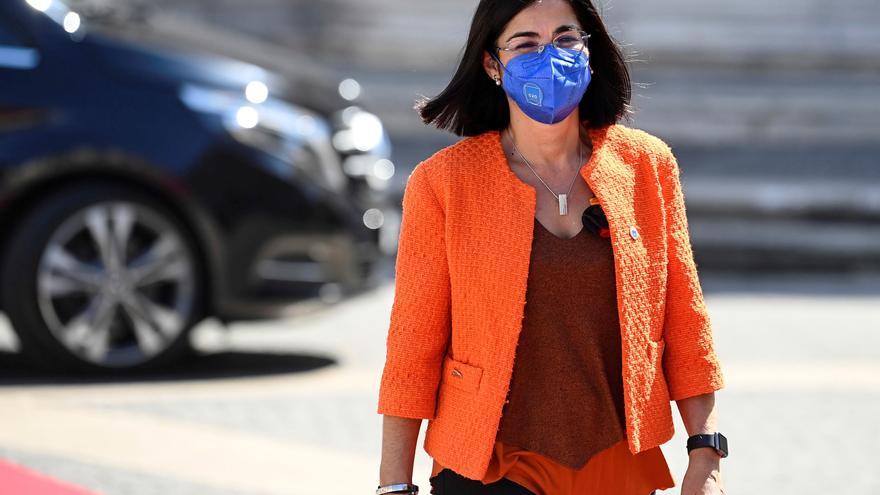 New chapter of differences in the Coalition Government for an issue that can be considered tangential – the new Law of Equity, Universality and Cohesion of the National Health System (SNS) – but that has opened a new gap between partners. The purple formation is opposed to this norm, which the Minister of Health, Carolina Darias, has brought to the Council of Ministers today, in first reading, because it does not end with the privatizations, enshrined in Law 15/97 of the Executive of José María Aznar .

United We can, explain sources from the Executive, considers that “it cannot support this bill because it defends public health and that a process of deprivatization is addressed as is happening in the Valencian Community”, in reference to the reversal of hospital concessions to private companies carried out by the Government of Ximo Puig in the case of hospitals in Alzira and Torrevieja. The same sources maintain that it is to maintain the legislation that has allowed the Madrid president, Isabel Diaz Ayuso, privatizing several centers in the Community of Madrid “is not a minor issue.”

In addition, they assure, it supposes to breach the agreement of the Government of coalition that in the point on the commitment of “shielding” of the public health, sustained in a “direct public management”. In this sense, the Government pact alluded directly to “the revision of Law 15/1997 of the PP to enable new forms of management of the National Health System and the set of regulatory mechanisms that open the door to privatization of the system.”

Government sources indicate that the alert on this matter arose when they verified in the meeting of the commission of secretaries and undersecretaries, prior to the Council of Ministers, that the draft Darias it did not modify that legislation. An aspect on which the Government has not yet ruled. On Saturday the minister took advantage of her presence in the congress of the Andalusian PSOE to announce that the Government would approve the draft in first reading on Monday. According to sources from United Podemos, this first filter has passed without changes in this regard. That is, without any allusion to nullifying the sanitary privatizations.

“We are not saying that the law does not have positive points. The problem is that the fundamental point is not addressed, which is privatization and that is the real problem of public health ”he points to ‘The Newspaper of SpainRosa Medel, health spokesperson for United We Can in Congress. From the purple formation they explain that they oppose the writing of the text, because a modification is made but the law of Jose Maria Aznar. “We have proposed some alternatives throughout the development procedure of the processing of the law, we will provide the amendments and we hope that the PSOE will take it into account because, as the text is, we do not support it,” says Medel.

United We “clearly” supports the direct public management model. “A law was made, 15/97, and it was not a consequence of any EU directive, it was our law and we believe that it is necessary to repeal it, not to make small changes to the text that keep José María Aznar’s law intact” , Medel says.

The health spokesperson insists that her party wants that “in public services, specifically in health, which is a public service, private management is not allowed because it represents a clear decrease in efficiency and there is a very large diversion of public money so that some private companies do business ”.

This is what the public expects, Medel stresses and it was one of the conclusions of the Reconstruction Commission of the year 2020, he recalls. “This is our amendment. Fundamentally that because precisely repealing law 15/97 and betting exclusively on direct management is the most important of the entire text, “he adds.

The United We can proposal is to facilitate de-privatization when the administrative concession contracts are fulfilled. The purple formation, explains Rosa Medel, chooses the model of the PSOE of the Valencian Community, the one imposed by the former minister Carmen Montón (the so-called ‘Alzira model’) that “seems to us the model to follow.”

On October 20, the Ministry of Health put out to public consultation the draft Law on measures for equity, universality and cohesion of the National Health System (NHS). A regulation that, according to the department directed by Carolina Darias, introduces the health approach in all public policy.

According to Health, this measure effectively materializes the approach to health in all policies, in such a way that, in the definition of public policies, in all sectors and systematically, the health implications of the decisions that are made must be taken into account, with the aim of avoiding negative impacts on health and improving the health of the population and health equity.

The standard also seeks to avoid the incorporation of new health copayments, as is already the case with those established for medicines, in benefits that to date are not imposed, such as non-urgent medical transport or ortho-prosthetic products. These would increase the financial burdens of families and increase social inequalities in health, especially affecting the population at risk of poverty, which has also been severely affected by the covid-19 pandemic, according to Health.

Likewise, the text introduces a modification of the Assistance Guarantee Fund with the aim of making its regulatory development viable, in order to cover through this extra-budgetary fund the movements of persons entitled to health protection between autonomous communities and the cities of Ceuta and Melilla, guaranteeing cohesion and equity in the SNS.

Attack on the Private Healthcare of Podemos

Precisely, the rejection of the United We Can parliamentary group of the bill has provoked criticism from the employers’ association of private health. From the Spanish Private Health Alliance (ASPE) they have shown “their concern at the irresponsible attempt at confrontation that, once again from certain political groups, disqualify the model of public-private complementarity in health matters”.

For the employers, UP’s veto on the regulation, considering that it allows the “privatization” of public health, requires an “objective analysis that denies this type of unjustified attacks that only destabilize the National Health System.” According to ASPE, based on data from the Ministry of Health itself, only 11.2% of public health spending is allocated to the budget for concerts. Therefore, only slightly more than 1 in 10 euros dedicated to public health in Spain are used for concerts, which reduces waiting lists for hospitalization, diagnostic imaging, respiratory therapy and dialysis, among many other areas that comprise comprehensive health care.

In relation to the allusion of United We Can to the Valencian Community, in the case of the non-renewal of concessions of the Torrevieja and Alzira hospitals, the employers put on the table the extra cost of 76 million euros generated only by the latter center after his return to public management

“There is no extra cost. The problem is that when it was governed by administrative concessions, the ratios of health personnel were so low that they put themselves at risk the health of patients. In fact, when the Alzira hospital returned to public management they had to hire 400 health workers to be able to carry it out “, responds the spokeswoman for United We Can Health.