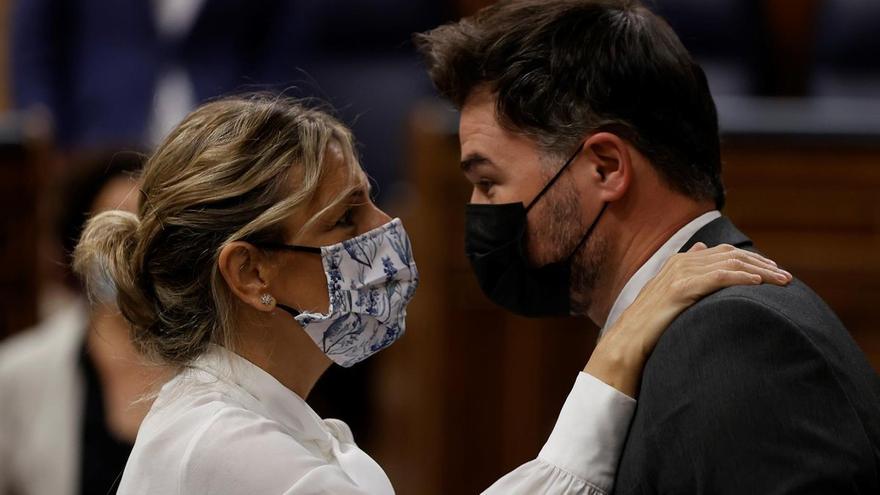 The space on the left is rearming itself, and Yolanda Díaz is not the only political actor preparing a platform for the next generals. The minority partners of the Government, the nationalists ERC, EH Bildu and BNGThey are also already exploring an alliance that will strengthen them in the face of the generals; a new front in space that pursues common interests: join forces in the respective territories to promote synergies and amplify their voice on the national stage, where until now they occupy a more testimonial role.

The good harmony between these forces is nothing new. All of them adhered on October 25, 2019 to the agreement of ‘Declaration of the Llotja de Mar‘in which they demanded a political agreement on the Catalan crisis, the defense of the right to self-determination and the release of “political prisoners”. This initiative was also joined by other nationalist forces such as the Balearic Islands of Mès or the CUP.

The two main forces that would make up this new left-wing path are the Catalan republicans and the nationalists, who maintain a fluid relationship; The last episode that shows the mutual support they provide is the presence of Oriol Junqueras this Saturday at the demonstration for the ETA prisoners; Leaders of Podemos have also attended this march; The formation has never hidden its intention to consolidate the alliances that constituted the “block of the motion of censure” and to promote rapprochement with the leftist independence party. However, from ERC they reject any alliance beyond specific agreements in Parliament or with the Government and are already thinking of their own project that amplifies the demands of the nationalist bloc.

The Galician nationalists of the BNG have become a hotly contested actor in this reconstruction of the left, and they have been probed by both the independence front and Yolanda Díaz’s. So much so that Ana Pontón, the party leader, was invited to join the act of the second vice president in Valencia along with Ada Colau or Mónica Oltra, but ended by decline the invitation.

It was the Valencian vice-presidency that conveyed the proposal for a convention of new female leaderships, but from the BNG they consider that “it may be the starting point of a political alternative“And admit that they refused to participate”to avoid misunderstandings“And because” evidently the BNG will not participate in that platform, it made no sense to attend the event ”.

In the BNG they reject adhesion to Yolanda Díaz’s project but, as indicate sources of training to EL PERIÓDICO DE ESPAÑA, Yes will address in their National Assembly, which will take place on November 7, join the nationalist electoral alliance promoted by the Catalan Republicans.

The Bloque Nacionalista Galego is the main opposition party to Alberto Núñez Feijóo in Galicia, a feat in which his candidate, an emerging figure at the national level, has played a prominent role due to his important role on the Galician scene, where he performed the ‘ sorpasso ‘to the PSOE thanks to its transversal nature and its ability to expand the electorate. The growth of the nationalist party, which could be considered ideologically coincident with Podemos, led to the purple ones staying out of the Galician Parliament and not even getting representation for their candidate, Antón Gómez-Reino, spokesman for the Galician confederal group in Congress and personal friend of the Minister of Labor.

There are not a few elements that unite Pontón and Díaz. In addition to their Galician origin, they share their transversal character and the sympathy they arouse among young people and women. Pontoon is today the second highest rated political leader in Galicia after the president of the Xunta; Like the Vice President of the Government, she occupies second place in the Government ranking behind Pedro Sánchez. In the case of Pontón, it is also the first among the voters of rival parties, including those of the PP and is, for the moment, the only one that seems capable of threatening the reign of Feijóo, while Díaz has ousted Pablo Casado as ‘presidential’.

Last October the Galician leader announced a “time for reflection” to rethink her continuity as head of the BNG. This order, which opened an internal debate and which put value within the party, recalls the one launched by the Vice President of the Government, who a few weeks ago advanced that I’d give up in case egos prevail.

Despite these similarities, Galician nationalists do not consider adhering to Díaz’s project, although they will address the national alliance proposed by ERC together with EH Bildu in its National Congress. In this convention they will also design a strategy that allows them to amplify their voice on the state stage and seek the prominence they already have in Galicia to consolidate themselves as a real alternative to the Feijóo Government.

If the BNG reject Yolanda Díaz’s platform, the Catalan Republicans do the same, who consider the vice-presidency proposal “incompatible” with your training. From ERC they believe that joining Podemos “is a dream of Iglesias since 2015 but it will not happen.” They are aware that the independence movement has won over the voters who were seduced by Podemos in its beginnings: “The electoral space that Podemos conquered in Catalonia in 2015 and 2016 is now an ERC space, those voters are ours,” they say.

Although they do admit to sharing “Left and Republican DNA”, They consider that electoral alliance impossible, when defending the independence of Catalonia from the rest of the State. Republicans do admit that dialogue with Podemos has been much more fluid since the arrival of Yolanda Díaz than during the stage of Pablo Iglesias, with whom the Republican spokesman, Gabriel Rufián, had harsh clashes in the Congress of Deputies. A bad relationship that, once Iglesias left politics, would have been rebuilt, according to knowledgeable sources. However, this does not bring political positions closer: “We are two different projects, differentiated and we will compete electorally”.