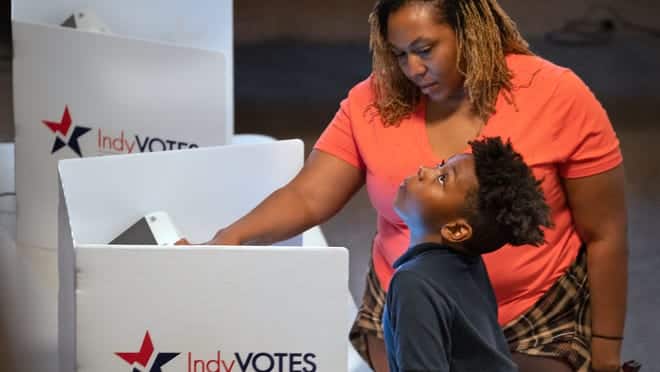 Houchin was followed by former U.S. Rep. Mike Sodrel with 25.7% of the vote and political newcomer Stu Barnes-Israel with 21% of the vote.

Barnes-Israel had conceded the race just after 9:30 p.m.

This is Houchin’s second time running for the 9th Congressional District. She lost to Republican Rep. Trey Hollingsworth in 2016, in part due to a boost from a super PAC funded primarily by Hollingsworth’s father.

During this election cycle, she had the backing of most of the prominent state Republicans across the spectrum, including Attorney General Todd Rokita, U.S. Reps. Larry Bucshon and Jackie Walorski, former U.S. Rep. Susan Brooks and well-known conservative election lawyer Jim Bopp.

As the only vacant congressional seat in Indiana after Republican Congressman Hollingsworth announced he wouldn’t seek reelection less than a month before the filing deadline, Republicans jumped at the opportunity to run for Congress in a safe district in southeast Indiana. Nine Republicans and three Democrats were on the ballot in the red-leaning district.

Houchin is likely to win the general election because of the right-leaning nature of the district.

‘It doesn’t smell right’:Do these congressional candidates really live in the 9th District?

Houchin, Sodrel and Barnes-Israel had the most cash to work with on the Republican side and were largely expected to lead the race.

Excluding personal loans, Houchin raised the most money as of April 13, raking in nearly $440,000.

Both Sodrel and Barnes-Israel faced questions about their residency.

Sodrel owns a nearly $2 million lakefront home in Columbus, just outside of the district he’s running in. But days after he filed to run for office, he changed his voter registration to a different address: that of a pole barn in Jeffersonville inside the district.

Sodrel’s campaign previously told IndyStar he is renting an apartment on the upper level of the pole barn.

“I stay a lot of places, just like if I’m in the northern part of the district — I’ve got to be in Bloomington tomorrow — sometimes you’ll be at Bloomington, Bedford, Decatur, I’ll stay here for the night,” Sodrel said. “When I was in Congress, I did the same thing.”

Likewise, Barnes-Israel purchased a four-bedroom house for $685,000 near Herron-Morton Place Park in Indianapolis in 2020, also outside of the district. In January, he registered to vote at his grandparents’ former two-bedroom ranch home in Greensburg, where he says he now lives with his wife and two kids.

When pressed about the use of the Indianapolis house, Barnes-Israel said he was “fortunate to be able to own some other property.” He said that he lives in Greensburg full time.

“Greensburg is my home,” Barnes-Israel said in a statement. “It’s where I was born and raised, where I work all day and rest my head at night, and where I go to church on Sundays.”

Legally, congressional candidates don’t have to live in the district they represent, but if they don’t they can run the risk of appearing like an outsider. Under Indiana law, it’s also a level 6 felony to vote in a different precinct than where one resides. Both candidates say they are registered to vote where they say they now live.

In the 9th District Democratic primary, Fyfe has the lead with 56.4% of the vote, followed by Asare with 29.6% of the vote and Dorris with 14% of the vote. An estimated 61.93% of the votes have been counted.

Other races to watch

The other congressional primary results to watch is Indiana’s 1st Congressional District.

Seven Republicans filed to run in the 1st Congressional District Republican primary, hoping to win the nomination to oust freshman Democratic Rep. Frank Mrvan in November. Jennifer Ruth-Green and Blair Milo had emerged as the clear front runners heading into the Republican primary, and both went negative in the last couple of weeks.

In the 1st Congressional District Democratic primary, Mrvan claimed victory just before 9 p.m. Tuesday with 90.6% of the vote and an estimated 25.66% of the vote counted. His opponent Richard Fantin had 9.4% of the vote.

Political analysts think the race has the potential to be competitive in November, though it’s long been a Democratic stronghold. That means whoever wins the Republican primary, will face a challenging race, but could potentially get some major financial help.

Call IndyStar reporter Kaitlin Lange at 317-432-9270 or email her at [email protected] Follow her on Twitter: @kaitlin_lange.