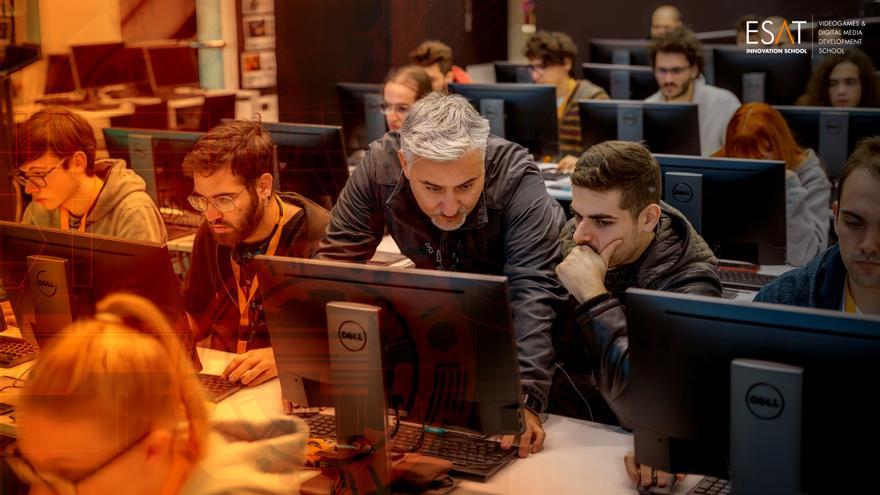 In this decade we are witnessing the unstoppable advance of digital skills, when many of the current training plans still suffer from a true preparation of their students in these subjects. On ESAT Valencia, from their campus in the heart of the historic center next to the Turia gardens, they have almost 20 years preparing their students to lead the digital challenge and to become the professionals that this growing sector demands.

Talking about a fourth industrial revolution 4.0, the digital one, not only implies that streaming platforms have grown dramatically in a very short time –they already reach 850 million registered users- or the already known sector of video game where some of them reach more than 1,000 million subscribers, it also includes concepts such as business intelligence, data mining, artificial intelligence, deep learning, big data and of course programming.

The goal of the ESAT Valencia is that their students leave their comfort zone and internationalize to guarantee not only access to the best positions, but also, that they know the reality of a globalization that also affects and in a more intense way, the digital world. With a training of between two and three years, depending on the chosen pathway, you get a British official HND equivalent to 120 ECTS, and through an additional course -Top Up Year- in foreign universities the Bachelor’s Degree (International university degree).

Their study plans are aimed at those students who want to dedicate themselves to Videogame Programming, Design or Art for videogames and Digital Interactive Art and Design.

With agreements progression with the most prestigious universities in the digital industry such as Sheffield Hallam, Coventry University or Teesside in the United Kingdom, the prestigious Paris College of Arts in France, the Kyoto Seika in Japan, UCF-University Central of Florida in the United States, Saxion University in the Netherlands or the Prague College in Prague, more 70% of the students who complete their studies at ESAT join one of these universities (out of more than 300 that can be chosen) and achieve 100% employability upon completion of their studies.

Professionals of the highest level

To transmit it is necessary to know, experiment and be in contact with the company, and without this contact with reality the practicality of training is lost. At ESAT they know that to produce a digital product or service, you have to apply a good dose of creativity to meet the needs of customers and of course, have a clear economic viability. Digitization is about people and processes, that’s why The faculty at ESAT is made up of professionals from the digital industry with such outstanding curricula as several National Awards or the recent Goya de Animación 2021.

Digital training for the future

The Digital design, the Programming and the Technology They are the foundation of ESAT training, delving into the most relevant aspects of each area and with the best development tools.

ESAT Valencia is the most specialized answer to study Interactive Digital Design and Videogame Development in Spain, responding to the urgent need to digitize and internationalize our young people in the field of development and creation of digital content, especially in Art for Videogames, Videogame Programming, Videogame Design and Art and Design-Art & Design (Interactive Digital Design), which digital-oriented creativity works in a transversal way.

Digital Interactive Design has high demand from industry and marketing. The need to frontend developers, full stacks designers and UX / UI specialists (Usability and User Interface) is essential for the creation of market places and other consumer apps for our devices.

ESAT teaches HND’s (Higher National Diploma), official British technical degrees of 120 ECTS credits, and with level 5 in the EQF (European Qualifications Framework), related to the digital sector and with progression to universities in the United Kingdom, to obtain in a single year, the Bachelor’s Degree, 180 ECTS British university degree qualification.

The specialties that can be studied at ESAT Valencia, with optional completion of a Bachelor’s Degree in the United Kingdom are:

The strict quality control of the British education system has made it possible to maintain the quality level of a college British, becoming the Technical School in which we all would have liked to train, with prestigious and active professionals and study plans adapted to the skills that the company needs. All this under a constant update of programs and their teaching by professionals in the exercise of their specialty.