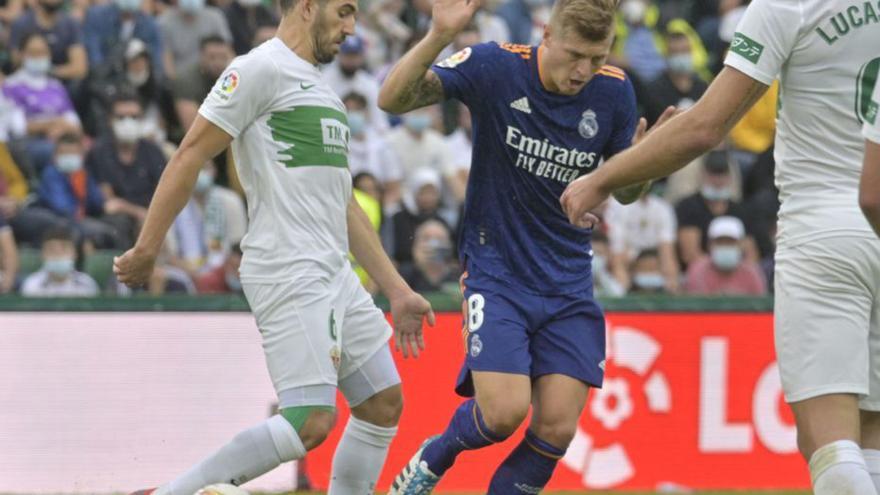 The Valencian coach started the season with three centrals: Roco, Gonzalo Verdú and Pedro Bigas. Then, the injury to the Mallorcan, who was off the pitch for a month, opened the gates of ownership to Diego González. But the man from Cádiz also suffered several injuries and a relapse when he was offering his best level.

With the change to defense of four, Verdú and Roco took the position. But, after Bigas returned, in the last two games, against Alavés and Real Madrid, despite the fact that the two games were played just three days apart, Escribá has once again bet on the Mallorcan and the Chilean, relegating Gonzalo Verdú to the bench.

In principle, Pedro Bigas and Enzo Roco were signed last summer to reinforce an area of ​​the field that raised some doubts the previous season. Both came backed by their experience in the Spanish league. Bigas at Eibar and Roco in his previous stage at Elche and Espanyol.

The two were called to be the headlines, in Chilean on the right flank and Mallorcan on the left. The good performances of Verdú and Diego González, together with Bigas’s injury and the march with his team from Roco allowed the Cartagena and Cadiz to enjoy minutes.

But from now on, if no setback arises, Escribá seems to have found his center-back partner and it will be difficult for him to change if not for special circumstances or for the return to the three-center system.

Enzo Roco and Pedro Bigas showed a good level in a demanding game such as Real Madrid. The Chilean was firm and attentive to the crosses and help. And the forceful Majorcan. It would be a surprise if the two do not repeat next Sunday in Mallorca, in what would be their third consecutive match.

At the same time that Escribá is defining the pair of centrals, things are also clarifying on the sides. Mojica is, so far and despite the fact that his performance has dropped in the last stakes, untouchable on the left. And on the right, Helibelton Palacios has played four of the last games for just one Barragán. Escribá has repeated the same defense both against Alavés and against Real Madrid and it seems that he has found his back.

In any case, Barragán, Gonzalo Verdú and Diego González have shown when they have played that they can offer a good level and they are sure not to give up and they are going to make things difficult for Escribá.

Despite the external debates about the goal, about whether Kiko Casilla should continue playing or Edgar Badia would have to have a chance, the franjiverde coach has it very clear and his starting goalkeeper, except for a debacle, will continue to be Casilla. December will soon arrive and the Cup matches in which Badia will have a good opportunity to claim.

With the goal and defense almost outlined, there are three other positions of the eleven that also seem fixed. In the center of the field, Omar Mascarell, Raúl Guti and Fidel have been performing regularly. The Zaragoza player will be dismissed in Mallorca due to a sanction and leaves a gap. It remains to be seen if the Valencian coach opts for Gumbau, who usually starts every game from the bench, or bets on Pastore, forming a more offensive team.

The Argentine is also crying out and, especially with his good game, his continuity in the starting eleven. If that happens, with Lucas Boyé also fixed in the lead, practically, there would only be a position in which a dance of players can take place.

Therefore, despite the fact that Fran Escribá said that he did not want to have a fixed eleven, little by little, with the advancement of the competition and falling under its own weight, a typical team is emerging for Elche this season.

From there, there may be specific nuances. In fact, in last Tuesday’s matches in Vitoria against Alavés and Saturday’s against Madrid there was only one change in the starting eleven, such as the entry of Pastore by Tete Morente.