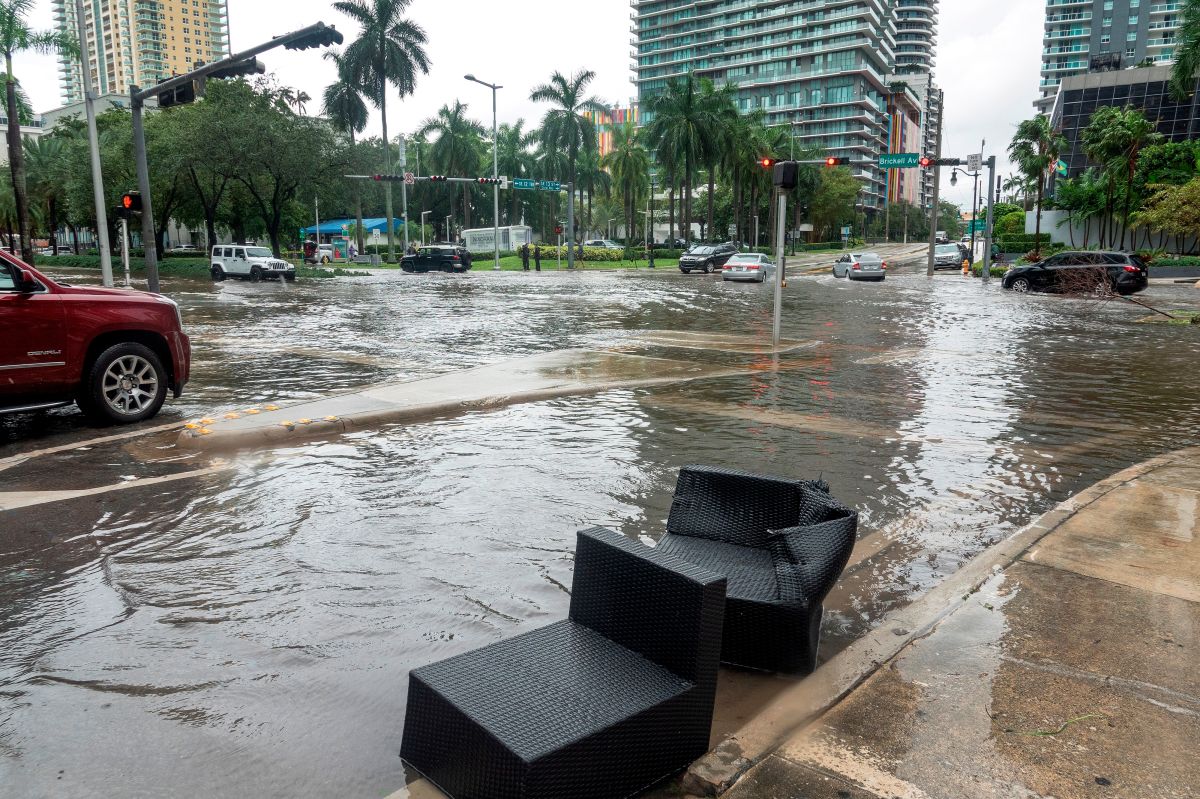 Flooded streets in Downtown Miami, Florida, this Monday after the passage of Eta.

MIAMI, Florida – Tropical Storm Eta became a hurricane again this Wednesday after moving away from the westernmost portion of Cuba and get closer to the coast of Florida (USA) that faces the Gulf of Mexico, although it is expected to weaken again when it touches land, said the National Hurricane Center (NHC) from the United States.

Reports from a “hurricane hunter” aircraft from the government’s National Oceanic and Atmospheric Administration (NOAA) indicate that Eta has once again strengthened into a Category 1 hurricane offshore, with maximum sustained winds of 75 miles (120 kilometers) per hour. hour, with stronger gusts.

The system is traveling at 15 miles (24 kilometers) per hour in a north-northeast direction and, depending on the cone of trajectory, in the next two days it will cross the Florida peninsula from west to east until it reaches the Atlantic coast.

A hurricane watch is on from Anna Maria Island to Yankeetown, the observatory said.

The center of Eta will move close to but offshore from the southwest coast of Florida today, and will approach the central west coast of the peninsula tonight. On Thursday it will move inland over sectors of the northern peninsula.

Due to this system, the cities of Miami, Fort Lauderdale and Palm Beach (southeast Florida) have already exceeded the accumulated rainfall totals in a normal year, when there are still 20 days left until the Atlantic hurricane season officially ends and more seven weeks to the end of the year, the National Weather Service in Miami reported Tuesday.

The cyclone, which caused deaths and destruction in Central America, crossed western Cuba and southern Florida last Sunday, where between Sunday and Monday it left streets flooded and led to the closure of shops and schools.

On Sunday night, Eta made landfall on Lower Matecumbe Key Florida, with maximum sustained winds of 65 miles (104 kilometers) per hour, according to the NHC.

Previously considered “extremely dangerous,” the Category 4 Eta hurricane made landfall on November 3 “along the northeast coast of Nicaragua” with maximum sustained winds of 140 miles (220 kilometers) per hour.

Storm Theta weakens in the Atlantic

For its part, tormenta Theta it weakened “slightly” today over the eastern Atlantic and at 9:00 GMT was 740 miles (1,190 kilometers) southwest of the Azores islands.

It carries maximum winds of 65 miles (100 kilometers) per hour, according to the most recent NHC bulletin.

Theta formation brought the number of storms to 29 in the current and very active season in the Atlantic and incidentally broke the record reached in 2005, when a total of 28 named cyclones were recorded.

Theta, which moves east-northeast for about 8 miles (13 kilometers), poses no risk to populated areas and has not merited the issuance of advisories or warnings, according to the NHC.

They watch a new threat in the Caribbean

With 19 days to go until the current season, which began on June 1, officially ends, a tropical wave located over the eastern Caribbean Sea is currently producing disorganized rains and storms.

It is expected to drift west in the coming days, and a tropical depression is likely to form this weekend when the wave reaches the central western Caribbean Sea, the NHC said.

According to the route chart projected by the observatory, the system, with an 80% probability of becoming a cyclone within five days, heads towards the same area of ​​Nicaragua where Eta made landfall on November 3.