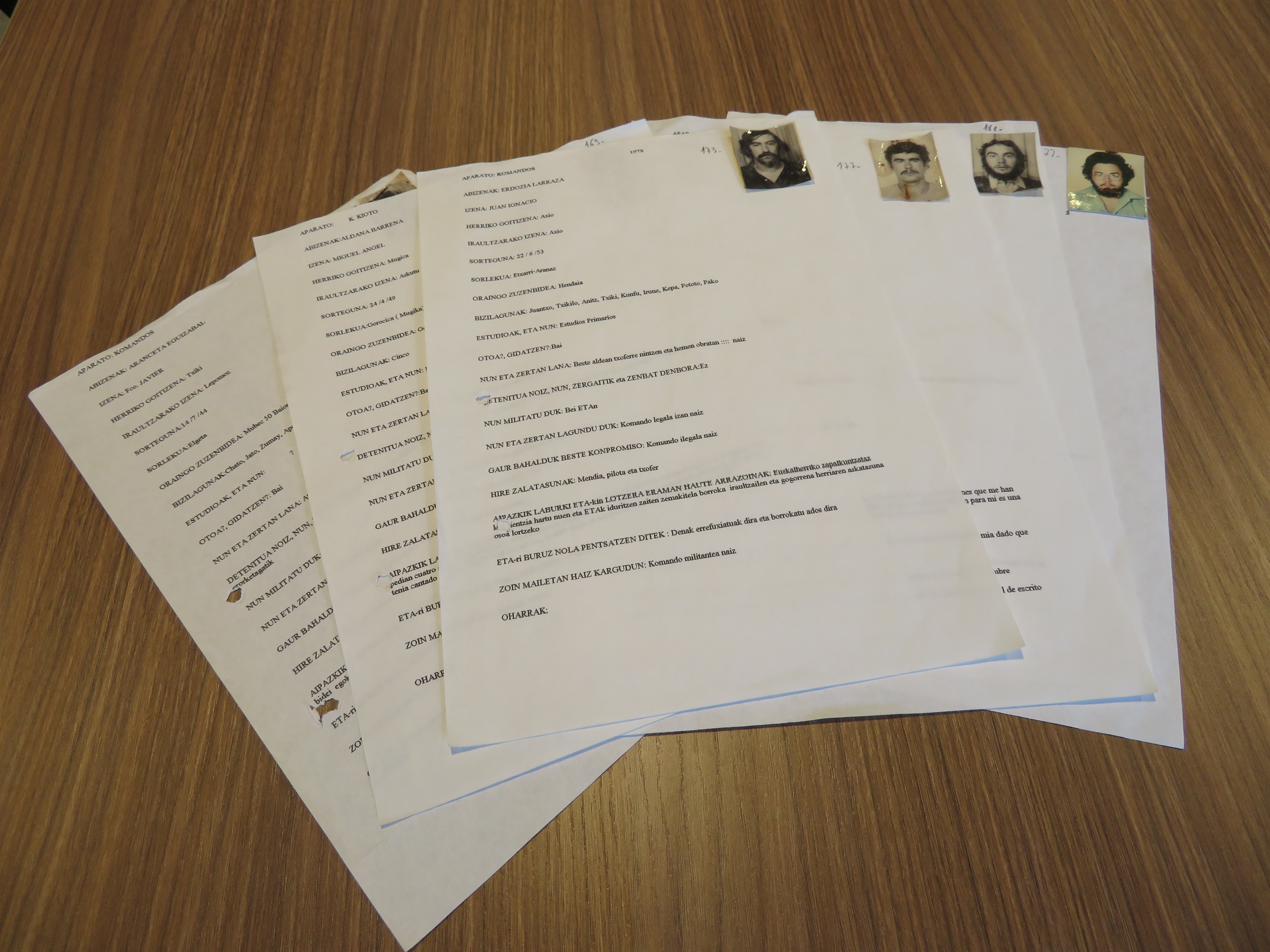 A whole catalog of forms with data, hobbies, and personal motivations of new members of ETA in the seventies and eighties will be exposed to the public. The files, which can be seen at the headquarters of the Memorial Center for the Victims of Terrorism in Vitoria, were found by the French police on October 3, 2004 in a den called Birds (birds), located under a house in the town of Saint-Pierre d’Irube, six kilometers from Bayonne, in the French Basque Country. The operation, developed as a result of a joint investigation by the French police and the Civil Guard, led to the arrest of Mikel Antza, ETA’s political chief since 1993, and his partner Soledad Iparraguirre Anboto. When discovering the hiding place under the house, the agents verified that the old documentation was abundant, which made the investigators suppose that it could be the “historical archive” of the gang.

The files that ETA members filled out when they joined the terrorist organization include information such as the “revolutionary name” (name for the revolution), the apparatus in which they were framed, if they had been arrested, what they and their families thought of ETA or the reasons why they joined the band. “The members had to deliver a copy of the ID and passport-size photograph and with this, those cards remained in the organization’s archive,” says Florencio Domínguez, president of the Memorial Center, who recalls that before that operation in October 2004 “it was I had come to locate a blank card ”but none filled out.

Other sections of the forms mention the reasons why the new militant joined ETA, if they had any position in the band, if they had previously collaborated with the group and also some personal hobbies. “The files thus show a combination of hobbies – they mention the mountains, reading, another confesses to being a” womanizer “- with all kinds of justifications for violence,” the Memorial Center has advanced. In this sense, he details that in these files you can read how Pablo Gude Pego, a member of the Autonomous Anticapitalist Commands who died in a confrontation with the Civil Guard in 1984, “takes the opportunity to expose a supposed Falangist who would live ‘under me’ in Renteria ”. Furthermore, it highlights that Francisco Javier Aranceta, who died in 1980 while committing an attack in which the civil guard Rufino Muñoz died, “is the only one who distrusts and shows his disagreement with all ETA members filling in these forms in case they fell into the hands of the Police, as this ended up happening, “says the center’s statement.

Florencio Domínguez recalls that this material took almost 15 years to be transferred to Spain and that it was delivered by the French authorities to the Spanish in February 2018 so that it could serve the security forces in their investigations. Domínguez points out that, of all the documentation collected, the Center has so far only received 69 files “from the seventies and eighties” that “have no judicial journey”, since the Prosecutor’s Office of the National Court and teams of the National Police and the Civil Guard continue working with the rest of the material. In addition, it points to the judicial usefulness that some of these documents have had. “Some documents found in that den served, for example, to try and convict the perpetrators of the murder of the prison official Máximo Casado in 2000,” he recalls.

When in November 2010 the trial was held in Paris against Mikel Antza and the other ETA members captured in the same operation in 2004, the one who was number one in the band since the fall of the Bidart leadership in 1992 complained to the authorities French to return the documents that were kept in the Saint Pierre d’Irube den, assuring that it was the “historical archive” of the terrorist organization. The Memorial Center believes that there are three reasons for including these cards in the exhibit. In the first place, he believes that it is necessary to “identify the victims, but also the perpetrators, each one in his or her role”, also “present evidence of the internal activity of a terrorist organization”, and finally, for “the symbolic value that has the fact that the file of the terrorists ends in the Memorial of their victims ”.