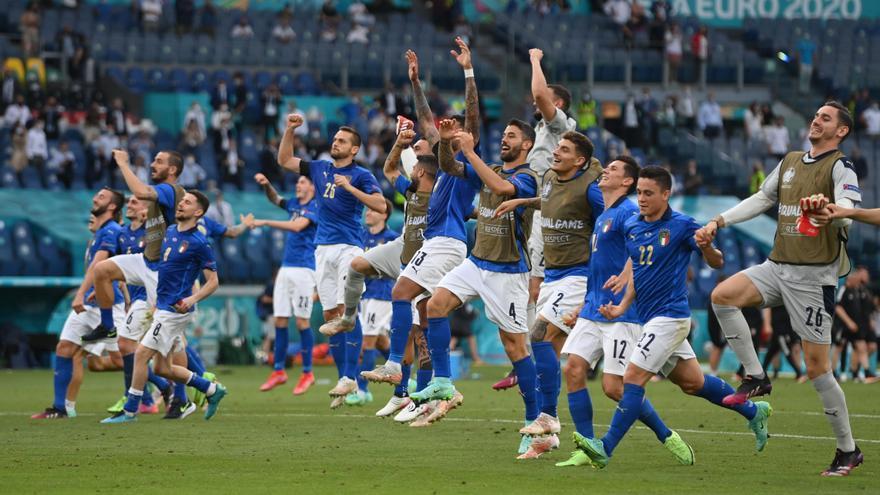 The Italian team completed their immaculate group stage with a 1-0 win against Wales at the Roman Olympic and advanced to the knockout stages of the Eurocup as first seed, for which they will travel to Wembley to play against the second seed of the group C.

A goal of Matteo Pessina In the 41st minute it was enough for Roberto Mancini’s men, who chained their eleventh consecutive victory without conceding goals and equaled their record for games without defeats, with 30, like those of Vittorio Pozzo’s Italy in the 30s of the last century.

The “azzurri” did not give an option to a Wales who was left with ten men due to the expulsion of Ethan Ampadu in 55 and who advanced to the second round as second, so they will face in the second round, in Amsterdam, the second of group B, in which are Belgium, Denmark, Russia and Finland.

No “biscotto” (not winning on purpose to have, a priori, a more comfortable path), promised Mancini at the press conference the day before, and Italy, despite the eight changes made by the technician to manage energy and give minutes to several illustrious substitutes, such as Federico Chiesa, Federico Bernardeschi or Andrea Belotti, seized the ball and maintained a high competitive level.

Marco Verratti, recovered after a collateral ligament injury in his right knee, was the leader in midfield and gave rhythm to an Italy that creates, combines, entertains and enjoys their offensive game.

A volume of play that ended up collapsed to the Welsh 5-3-2, in which Gareth Bale barely had a chance to receive the ball, in the 41st, when Matteo Pessina sent a Verratti center into the back of the net, in an action to stopped ball.

The Atalanta midfielder, who has the German Toni Kroos as an idol, celebrated his goal by running to the bench, giving a new sample of the union of the “azzurro” dressing room.

It was the prize for an Italy that was able to unlock the score much earlier, not forgiving Belotti and Chiesa, starters replacing Ciro Immobile and Lorenzo Insigne, respectively, good opportunities.

True to form, Italy kept pushing and savored the double lead in the 52nd, when Bernardeschi hit a post with a powerful direct free kick from 23 meters.

The “azzurri” controlled the duel and did it even more after Ethan Ampadu saw a direct red at game time for a hard stomp on Bernardeschi. There were protests from Wales, but the VAR confirmed the decision of Romanian referee Ovidiu Hategan.

Gareth Bale tries to control a ball against Italy. EFE

However, contrary to what happened against Turkey and Switzerland, Italy did not manage to finalize the match and Wales remained alive, until they built an unbeatable opportunity for Bale. The Real Madrid winger was able to draw at 75, but his left-footed volley ended up high, after the Italian defense forgot about him in a set piece action.

It was the last chance for Wales, against an Italy that defended their advantage until the end with the possession of the ball. There was also time for the debut of Giacomo Raspadori up front and Salvatore Sirigu, who took the field in 90 for Gianluigi Donnarumma.

Referee: Ovidiu Hategan (RUM). He admonished Pessina (m.79), from Italy, and Allen (m.51), from Wales. He sent off Ethan Ampadu (m.56) for a hard stomp on Bernardeschi in the center of the field.

Incidents: Match corresponding to the third and last day of group A of the Eurocup played at the Olympic stadium in Rome before 16,000 spectators.