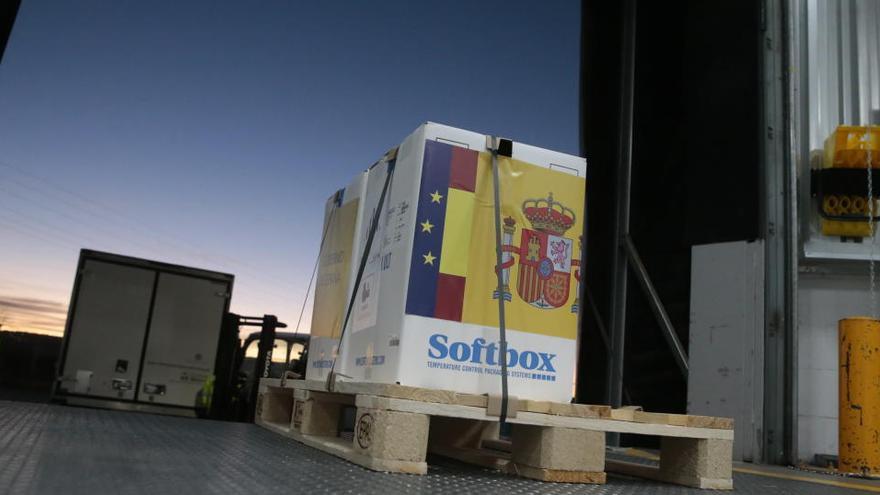 Everything is ready to begin this Sunday the long-awaited vaccination campaign against covid-19 in Spain, where the first cases of the new British variant of the coronavirus have already been confirmed in citizens who have traveled from the United Kingdom.

Since early Saturday morning, the first doses of the vaccines from the pharmaceutical company Pfizer are already in a logistics center in Guadalajara, as far as they have arrived escorted by the Civil Guard after crossing the border yesterday from the Belgian town of Puurs.

An elderly person and a worker from the Los Olmos nursing home in Guadalajara will be the first Spaniards to receive the first doses of the vaccine, in a complex device that will be extended to all autonomous communities until completing, during the next twelve weeks, the immunization of 2,295,638 people, and that will last for several months until the entire population is covered.

The vaccination will begin simultaneously in all the autonomous communities, and for this the first shipments have been distributed: by road to all peninsular communities, and by air, in units of the Armed Forces, to the Balearic Islands, Canary Islands, Ceuta and Melilla.

The one this Saturday is the first delivery to the communities, but from Monday there will be weekly shipments to each of them, with an average of 350,000 doses each week, in a procedure that will be similar in all the countries of the European Union.

The British strain, in Spain

Considered as “the beginning of the end”, the arrival of vaccines And tomorrow’s supply of the first doses has coincided with the confirmation that the British variant of covid-19 has already entered Spain; the community of Madrid has confirmed four cases with this strain -in people from the United Kingdom- and studies three more as suspects.

An entry that has provoked criticism from the PP, whose Secretary General, Teodoro García Egea, has reproached the Government for take measures to stop the returnscoming from the UK after the new strain of coronavirus was discovered. “23 ministers and none of them see him? Always the last to take action in the EU,” he wrote on his Twitter account.

Also the president of the Community of Madrid, Isabel Díaz Ayuso, has charged against the central government for not having made Barajas Airport “a safe place.”

The Ministry of Health will not update the data on the evolution of the pandemic until Monday, although throughout the weekend they are all alert systems active of the public health services of the autonomous communities to maintain surveillance and control throughout the country.

Some communities have chosen expand or tighten restrictions that they have and given the proximity of the New Year’s Eve parties; In Madrid, the regional government has extended restrictions on mobility to four new basic health zones that are registering a high rate of infections, in addition to the six where these measures were already in force.

In Catalonia, the risk of regrowth has grown again in recent hours, and the number of patients admitted with covid-19 has also grown again, reaching 1,592 -72 more than the previous day, and 40 more deaths have been recorded. since the last update.

The community will receive the first 1,595 doses of the vaccine in the next few hours, and they will begin to be administered tomorrow – a resident of the Feixa Llarga nursing home in L’Hospitalet de Llobregat (Barcelona) will become the first person in Catalonia to receive the vaccine- in eight residences chosen following a triple criterion: they are “green” residences, that is, without any active case of Covid; of public ownership; and large.

In Castilla y León the trend of slight increases in cases was broken this Saturday and 90 new cases of the disease have been registered, compared to 323 last Thursday, which represents a drop of 72.14 percent, although deaths have increased, which have risen to 17, compared to 10 the day before.

The 82 users and 47 workers of the Santa Eugenia residence in the Palencia municipality of Cevico de la Torre, will be the first to receive the covid-19 vaccine in Castilla y León, a news they have received between nerves, joy and hope, as the director of the center, Amada Salas, has told EFE.

In Andalusia, 1,410 new cases of covid-19 have been registered in the last 48 hours compared to 1,087 on Christmas Eve and 32 deaths (nine fewer), according to data provided today by the Ministry of Health and Families.

The eight Andalusian provinces will receive 1,840 doses of the vaccine in the next few hours, with which will begin to immunize elderly people admitted to residences, the personnel who attend them and workers in the health sector; The first doses will be administered -morning- at the Beato Fray Leopoldo residence and the San Cecilio hospital, in the city of Granada, and at the Armilla nursing home, in the same province.

Aragon has reported 145 new cases in the last 24 hours, 214 less than those confirmed the previous day, with a greater number of infections in Zaragoza, a total of 124, and without any registered death.

In the Balearic Islands, the Department of Health has notified this Saturday the death of three people with covid-19 in the last 48 hours, and has reported 640 new infections of SARS-CoV-2 in the islands, with which the number of cases assets in the archipelago reach 7,199.

In the Canary Islands, three people have died from the coronavirus, while the number of infections has fallen to 154, the lowest figure in eleven days, although it is provisional data that will be updated on Monday.

Cantabria has added two deaths, reaching 382 deaths since the pandemic began, while it has registered an increase in new positives and hospitalized, although cumulative incidence continues to decline.

The Valencian Community has registered 1,061 new infections and currently has 1,544 people admitted to hospitals, of which 246 are in the Intensive Care Unit (ICU).

In Madrid, where cases of the new British strain have been detected and where restrictions have been extended In various health areas, there has been an increase in the number of infections, registering 10,972 in the last week, and the accumulated incidence has risen to 333 cases per 100,000 inhabitants.

Murcia has registered, during the last two days, 293 new infections and five deaths, and in the Basque Country the positivity rate has risen again in the last 24 hours for the second consecutive day and has stood at 6.2 percent. , the worst data of the whole week; although hospital pressure, both in the ward and in the ICU, has been slightly reduced.

Where yes This healthcare pressure has increased, it has been in the hospitals of La Rioja, although no deaths have been registered in this community; and in Ceuta the incidence of the disease has once again been reduced in recent hours by adding more cured than positive and the number of patients stands at 52 active cases.

Asturias has registered fourteen deaths from coronavirus in the last three days, six more than last Tuesday, and 211 new cases of covid-19 diagnosed on December 23, 24 and 25 have been confirmed; and Galicia has experienced an increase in pressure care, going from 319 hospitalized people to 328 although the number of active cases in the community has dropped to 5,716.

In Navarra, the new cases have dropped in the last day to 82 after two days in which they had once again exceeded one hundred positive tests, but three new deaths and 122 people who remain admitted have been counted; and Extremadura has registered 149 positive cases in the last 24 hours -130 less than this Friday- and two deaths.