On the occasion of the V Centenary of the Magellan-Elcano expedition of the first circumnavigation of the world and the relationship with the imperial policy of Carlos V, the European and Ibero-American Academy of Yuste Foundation organized, together with the University of Extremadura, an online course in September 2020, coordinated by Rosa María Martínez de Codes and César Chaparro Gómez, who have been, in turn, the editors of this book that includes the presentations of the participants: Jaime Contreras Contreras, Miguel Ángel de Bunes Ibarra, José Emilio Sola Castaño, Ludolf Pelizaeus, Guadalupe Fernández Morente, Carlos Martínez Shaw, Nikita Harwich Vallenilla, César Chaparro Gómez, De Moluccis Insvlis, María Belén Bañas Llanos, Miguel Ángel Lama, Juan Antonio Manzano Pérez and Rosa Perales Piqueres.

I have always maintained that the most valuable thing about these meetings of scholars are the documents that are collected at the end and published in the subsequent books, so that they can in turn be consulted by all those who are interested in broadening their knowledge about historical events that They had such an impact on the future. And I attest that expectations are more than fulfilled. At the same time that the reader can better understand the meaning and repercussion of that first trip around the world, together with the vicissitudes of the navigators, he will find explanations of the political struggles, the contests and the influences that derived from the imperial policy of the Caesar who went to die in Yuste, in his fight for Christianity and against the Ottoman Empire, the Turk, Islam, and the cost that caused all of this. Without forgetting the images, legends and myths in the artistic universe of this journey that has been more than five hundred years old.

Already in the presentation, Rosa María Martínez de Codes indicated her intentions: «Our original idea was to articulate a transversal discourse that would link the fundamental aspects of the development of the Imperium Mundi, which the emperor endeavored to make operational during his years of government, in three scenarios complementary – the Mediterranean Sea, the Atlantic Ocean and the South Sea or Pacific Ocean – where Christianity, understood as a socio-political structure based on Christian principles, was severely questioned».

Carlos V and the sea: the Magellan-Elcano circumnavigation voyage and the age of spices 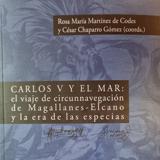 It might seem that delving into history, despite the importance of that first Magellan-Elcano voyage, could be arid. And he is not only enlightening, but engaging and entertaining. To cite an example, the chapter dedicated to the foods that the Spanish brought from America will illustrate and surprise the reader. Corn, potatoes, tomatoes and chocolate and their traveling adventures, in addition to their distribution in numerous countries, not only European, as well as their industrialization and subsequent commercial development, will consolidate truths about the age of spices.

The great merit of this book is that it covers broad and transcendent topics in illuminating and illustrative syntheses. Finally, for the inhabitants of Badajoz, the data on the Elvas-Badajoz Meetings held in 1524 will be revealing.