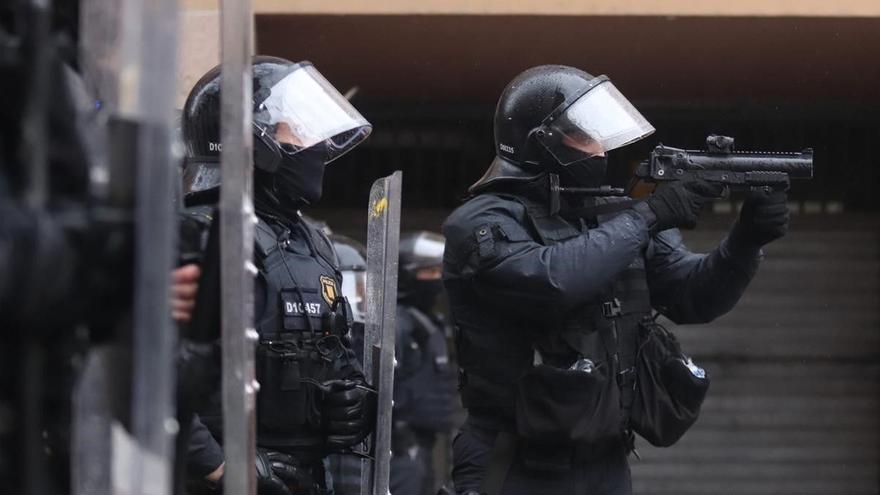 Although it is only at the beginning of its parliamentary process, the reform of the Organic Law for the Protection of Citizen SecurityKnown as the ‘gag law’, it has sparked a significant mobilization in the street against the government.

These are protests with a strong presence of the three parties on the right: Ciudadanos, Partido Popular and Vox. The last two dispute the influence on a strategic voting and opinion sector: that of citizens directly or indirectly linked to the security and armed forces, which is around one million people.

Citizen security is the argument used as the axis – or lever at certain times – of the agitation against the left-wing executive. The protest has been heated on social networks, and in public events, with countless reductionist or false assessments, which have led to the reform with the slogan “law of hatred of the police”.

There are five main themes around which the production of fakes and inaccuracies: the disappearance of a principle of authority of police officers, their disarm physicality in front of aggressive crowds, spontaneous celebration of street protests, the interposition of obstacles to identifications of rioters and criminals and the spread of photos of policemen to denigrate them.

“This law questions the principle of authority of the security forces and bodies,” says the manifesto of the Jusapol platform that was read at the end of the demonstration that this entity organized on November 27 in Madrid.

There is no “principle of authority” item in the legal system for police officers. The coinage of that principle, in security jargon, refers to a behavior pattern, according to which an administration, in case of controversy, of departure always believes its police.

But in the judicial process – governed by the Criminal Procedure Law before and after this reform – the police act of intervention in the event of a crime in which the policeman is a complainant and also injured is treated as one more witness document, subjected to the contradiction of the parties. Acting as witnesses in a trial, police officers have a presumption of credibility.

Amendment 10 presented by the PSOE and United We Can to the reform of the ‘gag law’ proposes that in a diligence of identification, registration, and verification, “the act that is issued will enjoy presumption of veracity of the facts recorded in it, provided that it is coherent, logical and reasonable, unless there is evidence to the contrary ”.

The same parties and unions positioned against the reform spread that the riot police will be disarmed, “just when our forces and security bodies are suffering the most aggressions,” says the manifesto read in Madrid.

Regarding the repression of riots, amendment 13 of those presented by PSOE and Podemos follows international experience. Thus, it instructs “the competent authorities” the task of “developing specific protocols in accordance with international standards, on the use of force and the use of anti-riot equipment, in order to always use the least harmful means for people and avoiding those that cause irreparable injuries ”.

The reform does not contemplate the repeal of any article of the Penal Code referring to the criminal figure of the attack on authority.

Part of the criticism of a reform that still does not even have a parliamentary opinion revolve around the obligation to notify of a demonstration in the street.

The president of the PP, Pablo Casado, wondered at an act of his party in León on the 27th “How will the Police protect a merchant from a picket line? or a street riot if the demonstrations do not need to be notified ”. In the street protest that day, the Jusapol manifesto stated: “Being able to call demonstrations without prior notification will cause altercations …”

Amendments 13 and 32 of the parties of the government maintain the obligation to notify to the authorities the call for a demonstration or any act in the street, and consider “the lack of prior communication process” a “minor offense”.

The amendments consider “the lack of prior communication” as not punishable if it is to exercise the right of demonstration by “a rapid expression in the face of an event of undoubted social repercussion that does not admit delay, provided that violence or disturbance of public order is not caused. ”.

This assumption has in fact been fulfilled with the current law in force: there were no sanctions for the spontaneous feminist demonstrations of December 2018 against the sentence on the rape committed by “the herd”, as there were no consequences on public order.

How long a police officer can hold a rioter, where he can identify him, and how he can defend himself against his violence are also a breeding ground for politically usable inaccuracies.

As the police unions and several Vox leaders lament, the proposed change of the law reduces from six to two hours the time in which police officers can retain someone for identification if they do not carry their ID. But these criticisms do not refer to the fact that the reform of the law continues to contemplate the period of six hours “exceptionally and for justified reasons, verifiable and communicated to the affected person ”.

There is also a stream of criticism around an obligation to return the undocumented person to the place where he was captured to be identified, “as if the police were a public transport service,” said the leader of the PP. The amendments propose that “persons displaced to police units for identification purposes” be “returned or facilitated their return to the same place where the identification could not be carried out by the agents” … but “when the police unit to which the has moved the person is in a different location to the requirement of accompaniment ”, and if this transfer does not affect the“ effective operation ”of the police service.

5.- Photos and videos of agents in action

The reform “limits the privacy of the agents and their families,” said Casado. The protest also pivots around the taking and dissemination of images of agents in action. “This law does not prohibit the dissemination by digital media of police interventions recorded by citizens. It is a serious mistake that leaves the policeman completely unprotected, including their families ”, was read from the platform of the march on the 27th.

The prohibition on the taking and dissemination of these images will not be repealed by this reform: it is already repealed by a ruling of the Constitutional Court of November 19, 2020. Its ruling endorsed the constitutionality of the gag law … except, and expressly, the subsection “Unauthorized” of its article 36,23, which considers serious infringement the taking and dissemination of images without permission. The court of guarantees perceives “prior censorship” in that subsection, which goes against the freedom of expression contained in article 20 of the Constitution.