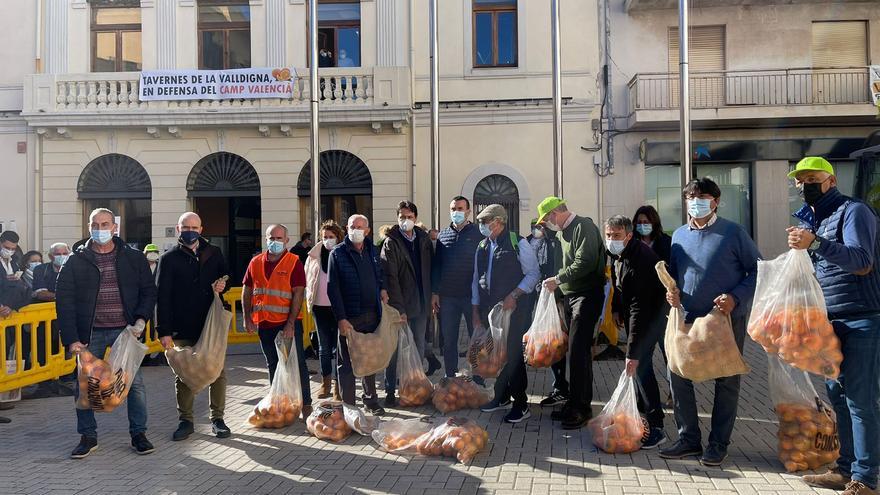 More than 2,000 people have participated today in the joint protest act organized by all the professional agricultural organizations of the Valencian Community – the Valencian Association of Farmers (AVA-ASAJA), ASAJA Alicante-Young Farmers, La UNIÓ de Llauradors and Ramaders, the Coordinadora Campesina del País Valencià (CCPPCOAG) and the Union of Small Farmers and Ranchers of the País Valencià (UPA-PV), with the aim of demanding support measures for all administrations in the face of the historical scale of production costs and the price crisis at origin.

Protest It has consisted of a march of people and vehicles (both cars and vans as well as tractors and agricultural machinery) that has run from the towns of Favara (Ribera Baixa) to Tavernes de la Valldigna (La Safor). In the first town a popular lunch has been held and before starting the tour there has been the burning of oranges and persimmons, of a doll with the image of the director of ENESA, José Miguel Pérez, who intends to “charge” the current citrus insurance and also of flags of third countries “that exert unfair competition to our productions, introduce pests to us and do not comply with European production standards,” they point out from ASAJA. After traveling on the N-332 to Tavernes de la Valldigna, in a journey of about 9 kilometers, in the town hall square of this town the parliaments have been held and persimmons and oranges have been scattered again.

It was in the areas where the protest has run that the bad start of the Navelina orange campaign began, which has subsequently spread to the rest of the citrus growing areas, “which currently registers ruinous prices of up to 0.15 euros per kilo that are very far from covering expenses, due to the massive entry of foreign imports and commercial abuses of certain distribution chains. These areas also concentrate the largest production of persimmon in Europe, a crop whose profitability is against the ropes because of the lack of solutions to combat pests and diseases “, they indicate from the association. Likewise, the claim highlights the expanding damage caused by the Cotonet from South Africa – 200 million losses in this citrus season – in clementines, mainly in the south of Castellón and north of Valencia.

Despite these claims, people affected directly or indirectly by the serious profitability crisis suffered by the vast majority of agricultural and livestock productions have participated in the protest. For this reason, the convening organizations demand the implementation of a Reconversion and restructuring plan for agrarian sectors in crisis.

In this sense, the representative entities of the Valencian countryside warn of an unprecedented rise in the production costs in agriculture and livestock and they ask for extraordinary measures in this regard. Electric power – fundamentally necessary to extract irrigation water – has become more expensive by 270% and many irrigation entities are forced to renew their contracts with marketers through unaffordable increases. Diesel used by tractors and other agricultural machines has risen 73%, as well as fertilizers (+ 48%), water (+ 33%), greenhouse plastics (+ 46%) or seeds (+ 20% ). In the livestock sector, the rising cost of 20% of feed for food animal weighs on the competitiveness of farms.

While food is beginning to become more expensive for consumers, at the beginning of the food chain, producers do not have the ability to pass the historical escalation of costs into the prices they receive. Therefore, in addition to temporary support, the agricultural sector requires strict and rigorous compliance with the reform of the Food Chain Law approved yesterday to truly serve to prevent abusive business practices and ensure fair prices for producers.

Likewise, agricultural organizations demand a more Mediterranean Common Agricultural Policy (CAP) and activate crisis management measures, when the situation requires it, in the case of the Crisis Fund provided for by the CAP and / or national funds. Also a deep review of the trade agreements of the European Union with third countries, “starting with the current revision of the treaty with South Africa, in order to establish reciprocity in the production conditions, greater phytosanitary controls and the declaration of ‘sensitive product’ to those crops whose profitability is impaired”.

Also Read  Unusual: In Lazio they suspend the coach of the Eagle, the club's mascot, for fascist gestures [VIDEO]

Other requests from agricultural organizations go through a significant reduction of the agricultural income tax module, the revision of the Penal Code to improve the fight against robberies in the agricultural sector, an Emergency Law for damage to wild fauna and an analysis of water resources and investment in hydraulic works, together with the maintenance of flows for irrigation of the transfer Tajo-Segura.

The convening organizations do not rule out new acts of protest in the coming weeks, as well as participation in a great demonstration in Madrid of farmers, ranchers and citizens in defense of a sustainable rural environment from the environmental, social and economic point of view.