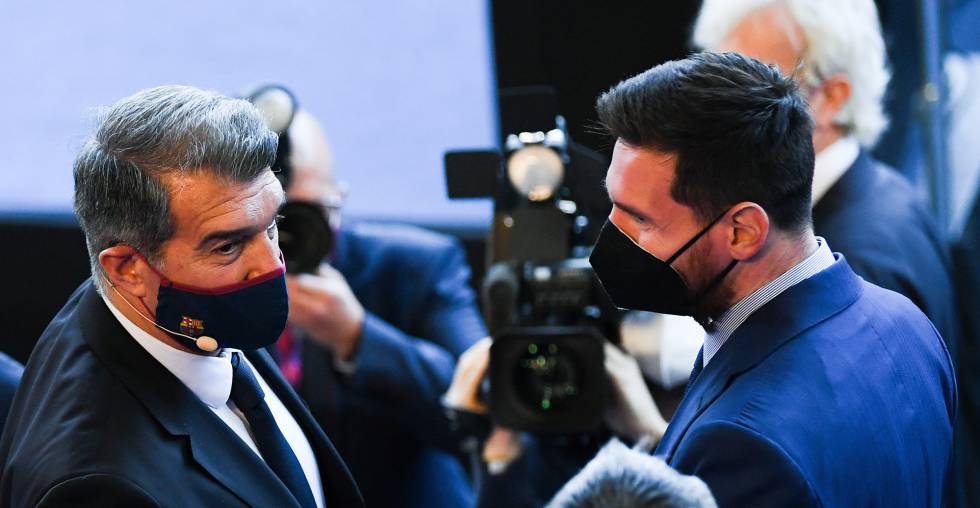 Leo Messi is the stone on which Joan Laporta intends to build his mandate as president of Barcelona. The only name that the Barça manager has mentioned since his return to the Camp Nou has been that of the league’s captain and top scorer (30 goals). Around the figure of 10, Laporta has unfolded a banner and a declaration of intent that allows him to buy time while speculating on the scope of the revolution in the locker room, the name of the coach and the management of a debt that forces to negotiate credits with entities that provide quick and easy money, and naturally with important interests, such as the already well-known Goldman Sachs.

The president understands that the financial and football lift requires maintaining the alliance between the Barça brand and the Messi brand. Although the offer that the club will present to the Argentine to renew the contract that ends on June 30 is still unknown, Laporta reiterates that he will do his best to convince the Rosario player. The pressure will finally be on Messi, who will have to answer yes or no, before or after the Copa América. The suspense allows you to play while with the list of registrations and withdrawals of the squad and also with the coach who is candidate for the Camp Nou bench. Despite having a contract until 2022, Ronald Koeman is not Laporta’s favorite.

There is also no consensus in the board on Xavi Hernández. The president would like to sign a coach to mark the start of his sports project at the Camp Nou. His preferences are not very well known, even though he is considered a depository of Cruyffista essences, and the opinion of the football director, Mateo Alemany, is also unknown. The carousel managed by the media includes trainers such as Liverpool’s Jürgen Klopp or Hans Flick, a former Bayern coach and now aspiring to be the next Germany coach. Rac1 informed that Barça is now betting on Flick. The Barça profile is debatable since the Barça style has been debated.

“Starting next week we will see the series of decisions we will make to have a more competitive team,” said Laporta. “You have to work hard and effectively so that we can aspire to win Champions and Leagues that are resisting us,” he insisted. “They eliminated us very early from the Champions League and the League was incomprehensibly lost,” concluded Laporta, who spoke of the “end of the cycle” and the “renewal” of the squad that began in the summer with the goodbye of Luis Suárez. Messi is the only essential of an old guard that includes Piqué, Busquets and Jordi Alba. There is also doubt about the continuity of players like Griezmann. Laporta, therefore, marks distances for the first time with the Camp Nou dressing room.

The termination of contracts is presented as a difficult task to fulfill if it is taken into account that those affected have already accepted to defer the collection of the tokens in exchange for extending their link with the club during the government of Josep Maria Bartomeu. And the list of possible signings has been reduced to footballers for whom transfer does not have to be paid: Eric García (City), Depay (Lyon), Emerson (Betis) or Agüero (City), Messi’s friend. There is no longer talk of Haaland, Neymar or Mbappé. The club needs liquidity to renegotiate the debt (1,173 million, 730 in the short term), pay the sports personnel and the banks – there is a maturity of bonds issued by the previous board for 200 million.

The solution has been to negotiate a syndicated loan of 500 million with Goldman Sachs, the entity that has already contributed 90 million for Espai Barça. The directive needs 100 million immediately while awaiting the result of the audits commissioned to know the economic situation of Barça. For Laporta, decisive to re-float the club in 2003 and 2008, it is convenient to explain his shock and business plan to deny that he acts with a certain improvisation since he already had to renegotiate the endorsement of 126 million to return to preside over Barça. he aimed at the Super League and gambled it with the bet on Messi.

From Ronaldinho to Guardiola with Txiki at the helm

Experience and courage are two of the arguments that Laporta uses to try to gain the trust of Barça members and fans. “We will do it again,” says the president on his return to the Camp Nou box after having directed the club from 2003 to 2010 and having passed a vote of no confidence in 2008. The beginning was marked by the imprint of Ronaldinho while Guardiola it was the axis since 2008. The common thread in any case was always the sports director: Txiki Begiristáin.

Laporta, advised by Johan Cruyff, always liked to mark sports politics with a figure like Txiki. He also bet on the continuity of the coach: he kept Rijkaard even in the worst situations to bet on Guardiola later. The president now has doubts about the technical secretary and also about the coach: Koeman’s continuity is not ruled out, if he does not find a better alternative, and on the other hand, the hiring of Jordi Cruyff as the second capital player continues on the air. of the football organization chart directed by the football director Mateu Alemany.