Bachelor of Information Sciences from the Complutense University, columnist (HOY, La Crónica de Badajoz, Periódico Extremadura), film critic (doctoral thesis on the arrival of sound films in Badajoz and its impact on Badajoz society in the 1930s), former president of the Badajoz Press Association, head of the Press Office of the Badajoz City Council and associate professor in the Audiovisual Communication Area of ​​the University of Extremadura, novelist and poet, Juan Manuel Cardoso (Badajoz, 1963) is, above all, agent and direct witness of the cultural life of his city.

This is how he demonstrates it again with this volume of stories, whose protagonists, themes, settings, stories and anecdotes all run alongside the Guadiana. According to the author, for seven years he maintained the habit of writing a story every day, between December 1 and January 6. This is how this formidable set of 233 short stories was gathered, which are published as ‘Terrifying Christmas tales’.

The phrase requires some nuance. It is already known that fear is free and everyone gets scared with go say what things. However, Cardoso’s texts do not seek to sow concerns or anxiety in the readers, as his admired HP Lovecraft would do. The Christmas period has been generously extended and although Christmas Eve, the Three Kings, Bethlehem, Santa Claus, Easter greetings, Santa Claus or the lottery are recurrent, they are not the only arguments referenced in these compositions. As for qualifying them as stories, no matter how broadly such a category is attributed, it could also be a debatable matter. Many are, clearly, but others could also be classified as scenes of customs, comics, psychological portraits, popular anecdotes or autobiographical evocations, although it is true that the author’s exuberant fantasy can introduce an imaginative, truly surrealist foreshortening, even in the passages closer to everyday life. Of course, the maximum projection of said virtue shines in the endings, often so surprising. 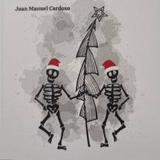 Also distinctive feature in the deliveries of Juan Manuel Cardoso, along with the touches of humor, is the extraordinary linguistic flair, which reaches overwhelming blooms when his desire for style imposes it. Suffice it to read ‘No entry to ghosts. Zombies and aliens’ (pp. 219-221), with authentic clusters of alien terms. As he also knows how to waste one of pejoratives to define certain parasites or euphemistic words when addressing eschatological issues. In other cases, vc ‘Un ass of death’ the synonyms spill over in a real cascade, until two full pages (71-72) of different butts are embroidered, capable of obfuscating the experienced Fernao Inacio Nicodemo dos Santos Nascimento y Sarmiento, born in Elvas and neighbor of Badajoz.

Through the streets, squares, cinemas, bars, offices, restaurants, nightclubs, workshops, rivers, walls, gardens of the city of Badajoz we will share adventures with real characters (from Porrina or Kaita, to Bob Dylan), imagined (the onychophagus) , of film (Jack Frost), literary (Dostoyevsky’s idiot, Kafkaesque Gregory Samsa) or of legend (Artabán), skillfully brought to our surroundings –preferably, the Plaza Alta– by Cardoso, who seems to repeat with Baudelaire: You know , reader, this delicate monster.

—Hypocritical reader, —my fellow,— my brother!