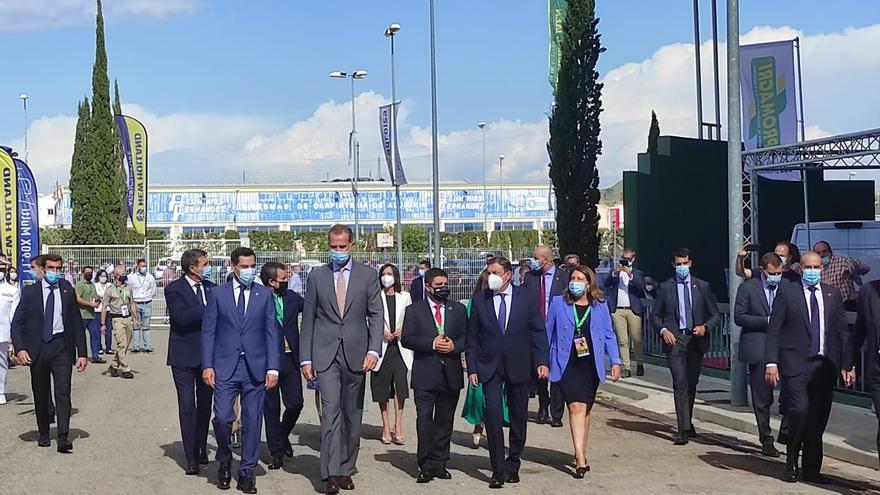 Felipe VI has shown its support to the Spanish olive sector, and in particular to the Jaén and Andalusia, with its presence during the inauguration of the twentieth edition of Expoliva, the International Olive Oil and Related Industries Fair, which will take place until the 25th in Jaén capital with the participation of a dozen countries and almost 270 exhibitors.

It was around 11 a.m. when the monarch arrived at the Fair and Congress Center of Jaén where he greeted the authorities led by the mayor of the city, Julo Millán, the president of the Junta de Andalucía, Juanma Moreno, and the president of the Diputación de Jaén, Francisco Reyes.

Already inside, a plaque has recorded its presence at the opening of this fair, while a tour of some of the 266 exhibitors distributed has begun in more than 13,300 square meters.

The first exhibitors in which he has stopped have been in the Diputación de Jaén where he has been handed over the Oil Jaén Selection 2021 and in that of the UJA where he greeted the rector of the University of Jaén, Juan Gómez, who presented him with a collection of books published by the university of Jaén on the occasion of its 25th anniversary.

He has also made a stop during his tour at the stand of the three protected designations of origin of olive oil with which the province of Jaén and the Protected Geographical Indication (PGI) Oil of Jaén has.

From your arrival and during the tour, of more than an hour, There have been multiple cheers to the King and the expressions of affection from a multitude of exhibitors that, although they have not been able to approach the monarch, they have wanted to show their gratitude for having his presence at this fair that is held every two years in the month of May, but that in this edition due to the pandemic it has been moved to the month of September.

He has not only visited the interior of the fair, he has also toured andl semi-covered pavilion where large machinery is exposed Of this sample, in which 950 companies are present, 4,500 brands are represented and it is attended by representatives from 18 countries, twelve autonomous communities and 25 Spanish provinces.

One of the anecdotes of King’s tour of Expoliva It took place at the Degusta Jaén product display where the head of the Jaén firm Quesos y Besos, Silva Peláez, told the monarch how the Royal House placed an order after winning the award for the best cheese in Spain but at that time it was they had exhausted him and he could not serve it despite having tried by all means.

Now this edition of Expoliva has given him the opportunity to give the monarch that order that at that time could not serve and that will be accompanied by other gastronomic products that bear the Degusta quality label Jaén, promoted by the Jaen Provincial Council.

The last point of the visit of Felipe VI and Expoliva It has been the International Extra Virgin Olive Oil Exhibition where it has toasted with liquid gold. This show is also part of this fair in which the monarch has shown his interest in a strategic sector for Spain such as olive oil.

One hour and 20 minutes is the time Felipe VI has dedicated to touring this fair To which he has arrived accompanied by the Minister of Agriculture, Fisheries and Food, Luis Planas. During his visit to the different professional exhibitors, the King has shown his interest in knowing first-hand the reality of a sector that shows its best side in this fair with which Jaén for four days becomes the world epicenter of olive oil .

In addition, within the framework of this fair the XX Technical Scientific Symposium, where 460 researchers have registered. It is structured in five forums related to olive groves and the environment; olive industry, technology and quality; economy and society; food and health; and oil culture and applied technology. Among other issues, circular economy initiatives in the olive oil sector, the digital footprint of this product and issues related to the new Common Agricultural Policy (CAP) will be addressed.

This edition is developed with all the safety and health measures. Along with the usual ones such as social distance, taking a temperature or the mandatory use of a mask, there is sale of digital tickets to avoid paper treatment by reading QR codes, which also allows a more rigorous control in the entrances and exits of visitors.

Previous visits of the monarch

The previous visits of Felipe VI to Jaén capital sThey date back to December 11, 2017 when the Iberian Museum was inaugurated. Then, on July 19, 2018, together with Doña Letizia, he would visit Bailén (Jaén) on the occasion of the celebrations commemorating the 210th anniversary of the victory of the Spanish army against the French during the War of Independence. More recently, on April 4, 2019, he would return to Jaén to close the second edition of the National Congress of Young Farmers, organized by Asaja.

However, the current King’s relationship with Jaén started in 1989 when he attended the wedding of a fellow promotion at the General Air Academy of Murcia as a guest. In April 2002, the then Prince of Asturias toured Andújar, Úbeda and the capital of Jaén. On January 14, accompanied by Doña Letizia, he inaugurated the New Infanta Leonor Theater in the capital of Jaén.