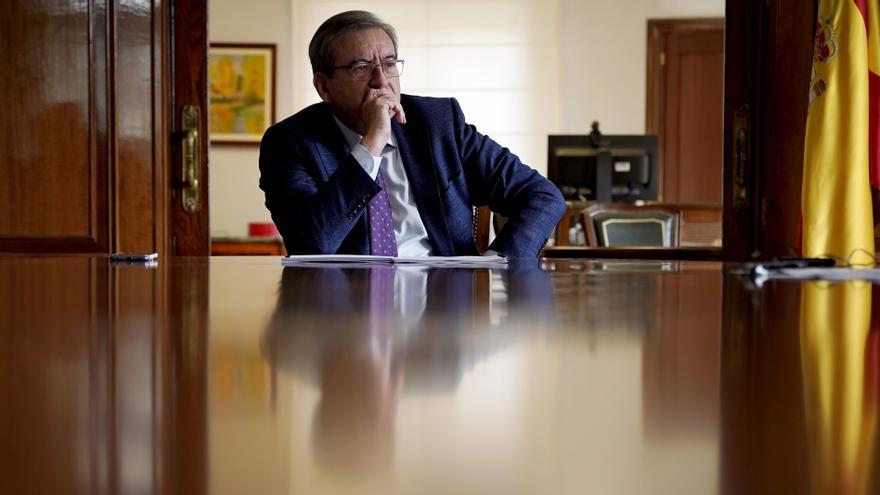 – It is one of the most important priorities of the Government in the matter of Democratic Memory. We have established a crash plan with actions in 114 graves at this time. And a four-year plan for which by the end of the year we will be intervening in 303 mass graves. In the six years of Zapatero 177 exhumations were made. It is a spectacular jump. We are talking about missing people, not of bones but of lives, of people who suffered a lot and whose relatives are waiting for them.

– It is a legal, forensic action … but also an emotional one.

– Yes. At the edge of the Pico Reja grave (Seville), with 1,100 shot by order of Queipo de Llano, many women appeared, many dressed in black, who were looking for a brother, a father … I did not want to create false expectations, because from experience we know that only one third of the bodies recovered can be identified. I said to one of them: “It is difficult for us to find her father and we can give him back.” And she said, “Don’t worry, these are all our parents.” It shocked me a lot, like when, in a delivery of declarations of reparation, a man interrupted the act. His father had been murdered in Avila and taken without permission to the Valley of the Fallen. He said: “Now I’m going to go to town, I’m going to make photocopies. I am going to put the first one in the grave where we thought it was. And I will put them in all the bars so that everyone knows that my father was not a criminal, he was a defender of democracy ”. Things like this are worth fighting for.

– Those who oppose the opening of graves maintain that this reopens wounds. Does exhuming shot reopens or closes wounds?

– That women of 85 or 90 years are still waiting to recover the corpse of their father or her husband to give him a dignified burial shows that the wounds are open. And precisely opening the earth, finding those corpses and delivering them is the best way to close the wounds. It is an act of pure humanity. And every day more is accepted; even people who have been reluctant at first to exhumations. In the Culture Committee of the Andalusian Parliament, when the Andalusian Memory Law was debated, there was reluctance from the PP. One expert recommended that the entire commission go see a grave. And when they went, I think to Écija, and saw the corpses and the shots to the neck, the PP representative said: “This is something else.” I think that is why the PP abstained.

– How many salvageable bodies are left in graves?

– There are no 114,000 left, as has been said. In the postwar period there were many more, according to the historically verified executions, but 85 years have passed, and in all that time there have been climatic events, many graves were in

open spaces, ditches, streams … or infrastructures have been built on top of them, and they have been disappearing. When the Valley of the Fallen had to be filled in 1959, 500 graves of Republican people were exhumed, without the knowledge or consent of their families; there are about 11,000 bodies. And in the Transition exhumations were made. And then more than 900 exhumations have been made, with more than 10,000 corpses. Today the bodies to be recovered can range between 20,000 and 25,000. We estimate that in the legislature and a half the mass graves of those shot in Spain will have disappeared.

– A part of society still believes that this activity is little less than searching Atapuerca.

– Those have not seen Pico Reja, they have not seen the shots to the back of the neck or the hands tied with cables, the bodies tied to each other, the silent and mourning families all their lives.

– There is still a refractory part of the population.

– But I believe that Democratic Memory is on the public agenda. The exhumation of the dictator in the Valley of the Fallen was a milestone, an act of justice and the strengthening of our democracy. It is true that there has been a deficit in the pedagogy of memory. The new Memory Law insists on the duty of memory as a guarantee of non-repetition. And in this duty of memory there is a fundamental element: that democratic memory, the history of democracy, enter the school, the ESO, the universities, the training of teachers, the public examinations … that future generations know what it has cost us to achieve democracy, that there have been historical democratic events that were abruptly interrupted by coups d’état.

– Are you also going to enter the training of cadets, in the military academies?

– Without a doubt, in everything. This establishes our democratic society and homologates us to the countries around us.

– But you go around Ávila, for example, and you can find Camuñas saying that the coup of ’36 was justified. Is a counter memory growing?

– A part of the right and the extreme right is anchored in a story constructed by the Franco regime in the 1940s to justify the coup and the Civil War. That is where the famous phrase of Ignacio Camuñas moves, pronounced before the passivity of the opposition leader. Given this, our Law intends that our democratic history, which includes from the courts of Cádiz, the struggles for freedoms, is made known, and that future generations anchor themselves in that democratic approach.

– But that countermemory, would you say it is increasing or decreasing?

– When we exhumed the dictator, the months before it seemed that a hecatomb was going to take place in Spain, and the dictator was exhumed and everyone forgot about the issue. The Spanish people are formed.

– Autumn is coming. Is the parliamentary process of the new Democratic Memory Law going to be a bed of roses?

– I appeal to all democratic forces, especially the parties of the left, the PNV, Esquerra Republicana, the Communist Party, because it is a very important law. The requirements that the memorialist movement makes us, and those of the United Nations, and the nullity of the convictions and sentences of the Francoist exceptional courts are included.

– Will it be a definitive law, or will it happen like the education laws, repealed with the changes of government?

– In Madrid it may be more complicated. It is the city where a street is returned to Millán Astray …

– It is worrying because of what it means of regression in the culture of Memory. The plate is hammered out. Long Knight, or the street name is removed Indalecio Prieto, or the plaques of those shot in the Almudena cemetery, or the verses of Miguel Hernandez, or the street of a republican teacher is replaced, Justa Freire, for that of Millán Astray, or it is announced that the plaque of the Fundación Libre de Enseñanza is going to be removed … I believe that the citizens of Madrid do not deserve this behavior from their mayor.

– Does the Francisco Franco Foundation have its days numbered?

– When the Pazo de Meirás was recovered, did they find it very empty?

– Some things are missing. Now what we want is to have all the furniture out there declared an Asset of Cultural Interest (BIC). Meirás is declared a historical site, around two figures: Pardo Bazán and Franco. Well then: we want everything that has to do with Franco and Pardo Bazán to be declared by the Xunta BIC; We work so that the Xunta can do it immediately, before there can be a resolution of the lawsuits in this regard.

– According to the plans you keep in your drawers, what will the Valley of the Fallen be like in the future?

– The law declares it a place of Memory. But a place of Memory that must be redefined. And to resignify is to explain how the Valley is built and who builds it and at what time, of totalitarian dictatorship, by republican punished labor force. And also explain the meaning, which is nothing other than the symbiosis of religion and politics that National Catholicism supposed. Franco’s legislation, which is maintained by the Foundation of the Holy Cross and the Benedictines, will be repealed. And besides, there will be no one with a preeminent place in the basilica …

– Have you already spoken with the family of José Antonio Primo de Rivera?

– We do not believe that there is a problem to transfer it to another venue, because it will be treated with exquisite respect and I hope that we will agree. Primo de Rivera is a victim of the Civil War. Franco was not and had to leave. Another thing that we are going to do imminently is the exhumation of 70 bodies requested by their relatives.

– Will the cross stand?

– And will the basilica be desecrated?

– It’s too early to talk about that.

– Has the attitude of the friars changed in the face of these changes?

– We saw his attitude when it came to removing the corpse of the dictator. I hope that in the exhumations of bodies that the relatives have requested, they maintain a different attitude, because there is a judicial order.

– Do you detect a change in the attitude of the Spanish Church towards Memory?

– What I detect is a great respect from the Episcopal Conference. And it is logical: we are talking about giving bodies to their families so that they can give them a dignified burial. We have felt that respect in the exhumation of the dictator and now I don’t think it will be otherwise.