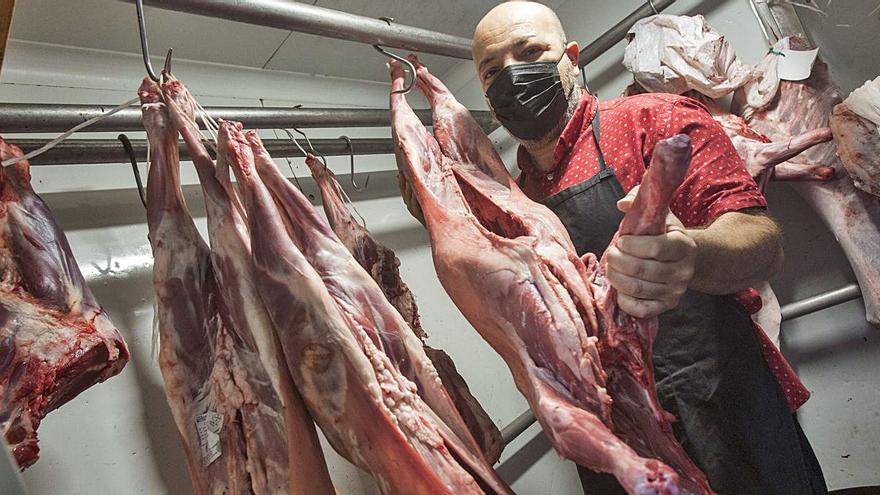 This year, the sale has been three times less than in 2019 In most butcher shops to celebrate Muslim Easter, the main festival of Islam, in which families eat lamb over the last three days. Behind this drop in the halal store business is the cancellation of the operation Paso del Estrecho due to the pandemic and the crisis between Spain and Morocco, so hundreds of Muslims who came on vacation to the province or met to celebrate this feast with their families they have not been able to do so. As an example, the El Cairo butcher shop, on Avenida Padre Esplá 19 in Alicante, which before the COVID dispatched 240 lambs for Eid al-Adha and this year has only served about 95. «No people have entered from Algeria or from Morocco », he explains Sammir Tammara, owner of the aforementioned butcher shop, who highlights the large quantities of lamb that Spain destines for export, with full trailers to Italy, France and Holland. And he even spoke of ships that carry up to 5,000 live lambs to the Maghreb or Libya from the Port of Cartagena. Although the tradition was to sacrifice a lamb as a family, in Spain it is prohibited and they are killed in slaughterhouses. Francisco Jover, president of the Guild of Butchers Entrepreneurs, explained how scarce these precincts are in the province. “There are fewer. For the feast of the lamb, many are sacrificed because sales usually increase fivefold due to the demand of the Muslim community. Killing them is forbidden in butchers. Before there was a slaughterhouse in each town but now there are only those in Cañada and Orihuela ”. Many are sent to the province of Murcia, where there are more such facilities.

The lambs that are in demand for this festival weigh between 18 and 20 kilos, and the client usually takes it whole or some piece. Butchers like the one in Tammara allocate a third of the animal that is not sold completely to people without resources of any religion. “Many sign up and leave their names,” he points out. Families with children are given about 3 kilos of meat and to single people a kilo and a half. All the bags are the same, and contain pieces to cook, pieces of neck and shoulder, and leg. This year he has received a call from the mosques of Alicante requesting meat for families who need to eat, especially because of the economic crisis.

Tijani Pakhrou, President of the Islamic community Anour de Alicante, explained that the festival lasts three days. “The lamb is slaughtered in slaughterhouses in Alicante and Murcia. Halal butchers order meat from distributors in advance, buy the lambs, take them to the slaughterhouse, slaughter them and pass the orders to each butcher. This rite is accompanied by a prayer, a 15-minute speech by the imam on the first day of the festival, which took place in Lo Morant Park with a couple of minutes of prayer. “The speech talks about the importance of the holiday within Islam, one of the most prominent at the end of Ramadan.” Just as citizens from other Islamic countries have not arrived due to the closure of the Strait Pass, “there are also no trips by those who reside in Alicante to the countries of origin due to the conflict between Morocco and Spain”, and the pandemic. Before the covid, some 100,000 Muslims resided in the province but now the community is smaller in number.