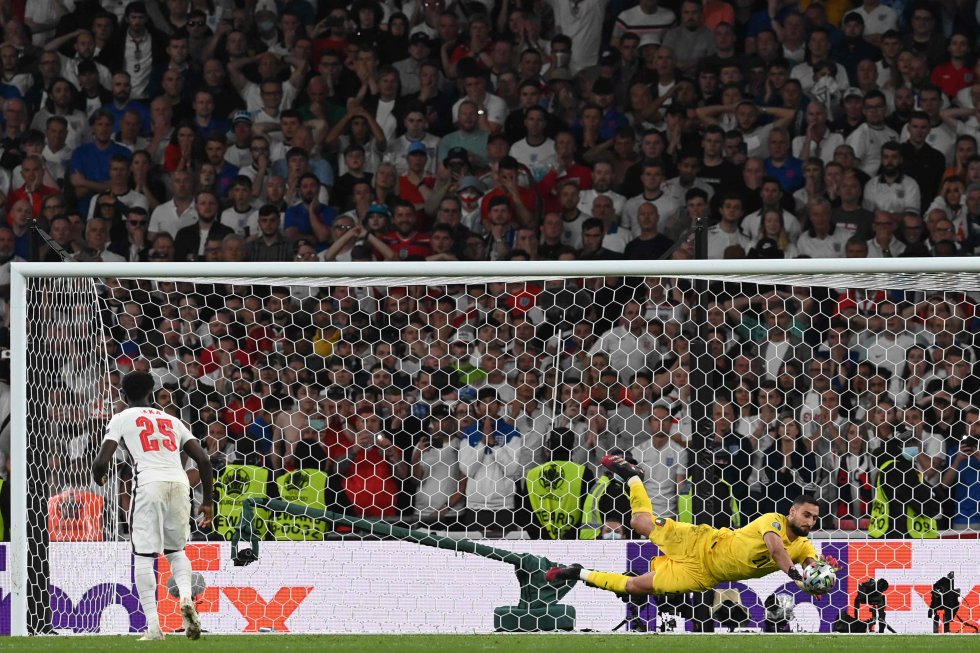 On Sunday at midnight, in the throes of what was the most momentous day in the history of English football since Bobby Moore lifted the World Cup on July 30, 1966, the managers of England’s football federation rushed to call the coach, Gareth Southgate, to find out the great mystery behind the disaster: How was it possible that at the most critical moment of the selection after half a century, the quintet of shooters from the penalty shootout against Italy in the final of the Eurocup will close with Markus Rashford, 23, Jadon Sancho, 21, and Bukayo Saka, 19?

To fulfill a task that is normally entrusted to the most expert, Southgate not only allowed three regular substitutes to deal with the pressure of a stadium with more than 70,000 people in a country inflamed by the health, social and political situation. Of the 30 footballers who had thrown a maximum penalty in this European Championship, only Saka and Sancho were under 22 years old. Furthermore, Saka had not taken a penalty in his entire professional career. The three selected – Rashford, Sancho and Saka – were unable to score.

The penalty is the most linear of procedures in the least linear of games. Its relative simplicity has produced esoteric theories and unforgettable surprises, generally related to failures in games that are defined in series of pitches. But neither the string of defections that crowned Liverpool in the 1980 Champions League final, nor Ivkovic’s stoppage of Maradona in the 1990 World Cup, nor the penalty that Roberto Baggio sent to the stands in the 1994 World Cup final, they are comparable to the futuristic management that last Sunday caused England to squander an unrepeatable opportunity with its most beardless boys.

According to sources close to the federation, Southgate’s response to alarmed managers at the choice of pitchers was as unprecedented as it was modern in nature. The choice of the quintet was the product of years of elaborate data analysis by scientists from the most funded performance science department of all soccer federations in the world. The experts, incorporated into the structure of the federation at the direction of its executive director, Mark Bullingham, had followed the method based on mathematical models popularly known as Big Data and that it comes from baseball, the most linear of team games.

“This is my responsibility,” was Southgate’s response when the British media inquired about the strange list. “I chose the pitchers based on what we did in practice. Nobody goes here on their own. We have won together as a team and if we have not won the game tonight, it is absolutely all of us to blame. But when it comes to penalties, it was my business. We have analyzed the players by what they did in their clubs and what they trained with us. In the 2018 World Cup and in the League of Nations we followed the same process and it worked ”.

After the extension of the final began, Southgate, according to sources close to the body that governs English football, received a message from analysts. They informed him that to complete the best pitching quintet he had two players who were not on the field: Sancho and Rashford. But Southgate must have relied so little on these players to get the game through that he didn’t bring them in until the 120th minute. The order of the pitchers – Kane, Maguire, Rashford, Sancho and Saka – was also suggested by analysts, according to reports. same sources.

The mathematician Natxo Palacios-Huerta, an expert in Game Theory and collaborator with several national teams in the development of strategies to tackle the penalty shoot-out, coined a famous phrase: “60% of the runs are won by the team that shoots first”. If so, Italy at Wembley squandered their math advantage when Pickford parried Berardi’s first shot. But not even for those did England come out of the black spiral. Asked to add more data to the salad, the BeSoccer company insisted on contradicting Palacios-Huerta and studied all the penalty shootouts of the last decade of the Champions, Europa League, European Super Cup, World Cup, Euro Cup, America Cup and Confederations Cup . In 30 of the 58 games audited, the team that pitched second won.

Determined not to override the scientists, Southgate decided to act loyally and take all the blame for the defeat. His version is the official version of a Football Association that boasts of having broken a historical streak of disappointments in penalty shootouts thanks to the contribution of science and technology. Until the World Cup in Russia, when England beat Colombia on penalties, the pros They had only won one of the eight rounds they had been involved in in the last 30 years. The new developments, according to Southgate, had brought about a cultural shift.

“I have it clear”

“What I am clear about is that a shot from the penalty spot is not a matter of chance,” Southgate said at a conference organized by Google Cloud Next, the federation’s sponsor and IT provider, in 2019. Asked about the influence of intelligence artificially in the preparation of penalties, the coach explained that Google’s computer programs had opened the horizon for him. “We analyzed thousands of penalty shots,” he said. “We have changed the culture. Historically, the FA has been seen as a group of old men in suits, disconnected from the rest of society. But we had teams that were not performing well and we had to modernize ”.

Under this pioneering project, in recent months the English internationals underwent detailed penalty shootouts at the St. George’s Park facility. Helped by a team of biomechanics, those responsible for the experiment measured the heart rate, oxygenation, gestures, strength and reaction speed of the performers to the movements of the goalkeeper. For rehearsal, they exercised until stopover of Rashford, cataloged along with Sancho as the footballer who before detects the intention of the rival goal.

In practice, the talent ladder for England’s penalty kick was clear. But at the stake of an irrevocable final, many veteran players or coaches were shocked by the new hierarchy. “Where was Sterling?” José Mourinho wondered, perplexed by the absence of the highest-ranking footballers in the squad. “Why weren’t Shaw or Walker on the field? For Rashford and Sancho it was very difficult to shoot a penalty without ever having touched the ball ”.

The memory of football is rich in substantial failures. Maradona, Zico, Platini, Baggio, Baresi, Cristiano, Ramos, Raúl or Djukic showed that there is no infallible formula to get out of the penalty situation with flying colors. What is truly new is not the failure of stars and captains, but that of young people with little or no experience, selected through Google.