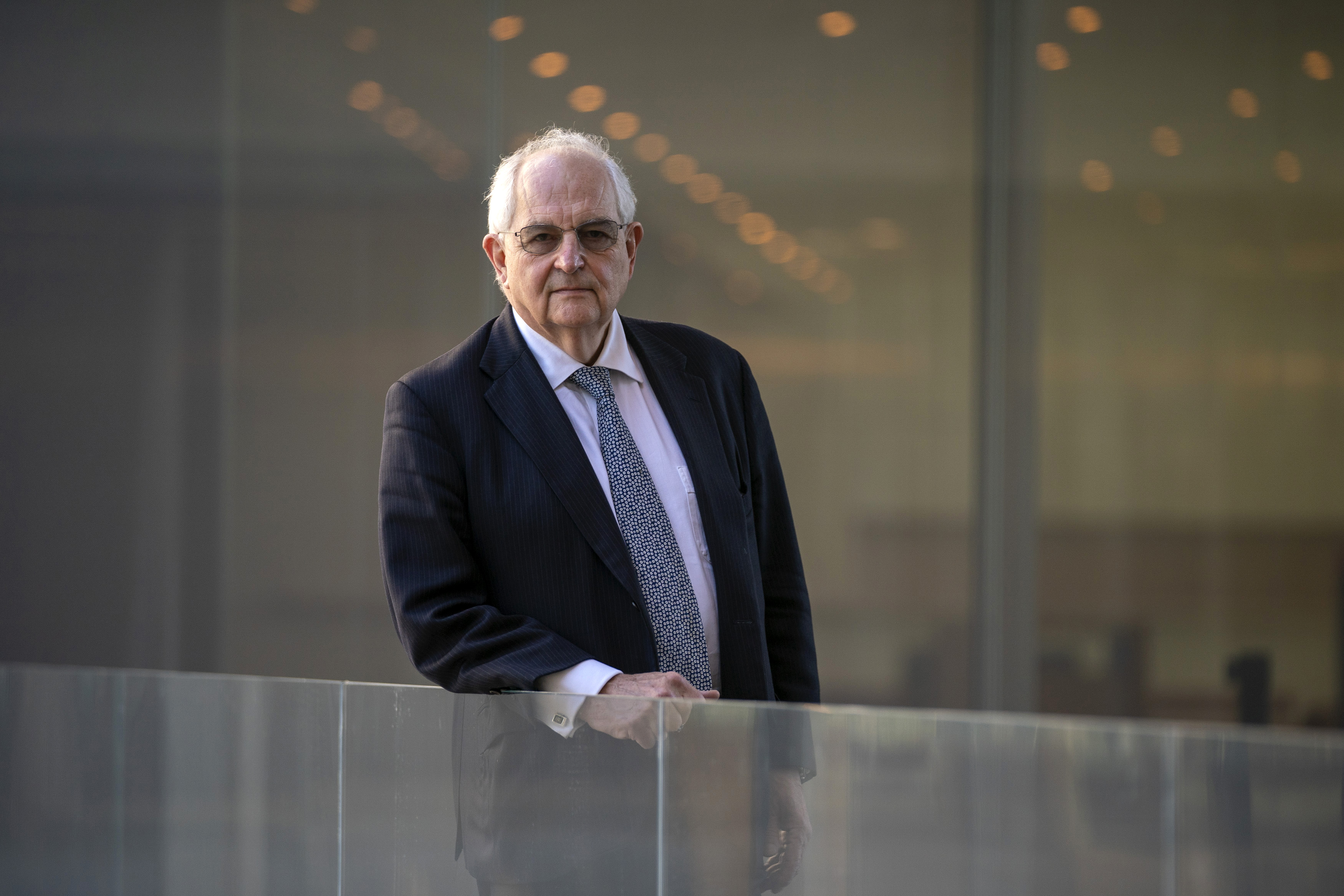 As a good Englishman, Martin Wolf takes only a few seconds to talk about the weather. “Seeing the sun is an even greater pleasure coming from London,” he says as the morning light filters through the large windows of the brand new auditorium on the Madrid campus of the IESE Business School. The star columnist of the Financial Times, the liberal bible with which diplomats, executives and followers of financial information in general have breakfast every day, traveled to the Spanish capital last Tuesday to talk about energy at an event organized by the business school and the Naturgy Foundation.

In his speech there are messages that Greta Thunberg herself would sign. “We have been talking about climate change for three decades, the Kyoto Protocol was signed 24 years ago, but there has hardly been any real progress, almost everything has been chatter … And now we are five minutes after midnight.” With others of a more pragmatic and friendly nature business as usual: “The old system has to continue to operate while we make the transition.” Wolf (London, 75 years old), is clear that this has more to do with Thunberg’s generation than his own. “I will be dead, but our children will not.” And he sees a fundamental difficulty. “Our challenge is to make the energy revolution while maintaining economic growth, and that requires cooperation in an increasingly nationalistic world.” Once the conference is over, and before taking the flight back to the United Kingdom, he attends this newspaper for 45 minutes.

Question: Today he has come to talk about energy. Although it is a global phenomenon, in Spain, the high price of electricity is one of the great concerns. Are we paying for the ecological transition?

Answer: If we raise the price of emitting coal, while the transition to a low carbon system lasts the price of emissions goes up, there is no doubt about that. The point is to design the best system to compensate the losers. The logical thing is to use the money collected [España ha obtenido 1.125 millones en el primer semestre, según Bruselas] and give it to households with lower incomes to compensate them for the additional costs.

P. In the great debate on inflation, are you with the ECB and the Fed when they say it will be temporary or are we looking at something permanent?

R. Nothing is permanent. Permanent is forever, and this is not. On the other hand, if by transitory we mean that high inflation lasts for a few months, it is quite unlikely right now. I think it could last a few years, maybe a couple of years. And the real risk is not that prices will go up immediately, which I think they will, but if they will go back or we will be left with higher price levels that squeeze real income.

Wages in some jobs are also likely to rise in response to high prices, especially in countries with high excess demand, such as the US and the UK, where labor markets are very strong – less in Spain, where unemployment is higher. These second-round effects can make inflation less transitory, because then employers, companies, start to raise prices because their costs increase. And breaking a spiral of prices and wages can be complicated and time consuming. It could get quite troublesome and pose a dilemma for central banks, who would have to tighten their monetary policy to maintain their credibility, and that would cause a recession. Inflation would drop but it would cause a lot of damage to companies, some of them heavily in debt.

P. Collapsed ports, container shortages, supply problems … In 2004 he published a book entitled Why Globalization Works. Do you still think it works?

R. I guess the obvious answer is: compared to what. We have had a shock enormous economic scale, the scale of which I think we have not fully understood. The reduction in production around the world in the second quarter of 2020 is unprecedented in its speed and scale. That has been followed by an incredible recovery that was also not expected. If you look at the forecasts at the end of 2020, they were much more cautious. No one predicted that vaccination would be so successful so quickly. That said, the questions about globalization are: What if everything had depended on domestic producers because there is no globalization? Could you increase your production now to meet the new demand? Absolutely impossible. Because your workers have left, the organization has left and they ask you to produce more than you have ever produced. The question, in other words, is, if we hadn’t had a global economy, would things be much better today? The answer is that it is unlikely and you would have to pay higher prices. No, I don’t think that due to a shock that happens once every century we must change the economic system to have a much more inefficient and less competitive. I think the argument is very weak.

P. Don’t you have to tweak anything in your design?

Some vulnerabilities have come to light. In certain supply chains we are too dependent on a single supplier. The clearest example is that of semiconductor chips [su carencia a nivel global está dañando la fabricación de coches y productos electrónicos], where basically Taiwan is the dominant supplier. That is why it is necessary to make policies to ensure a diversity of suppliers, not only a domestic one, but a global diversification. I don’t think anyone believes that the UK or Spain should have their own semiconductor factories [ponerlas en marcha requiere de ingentes inversiones]. Europe should, although it is very difficult to do because they do not have the tools or the experience. Other suppliers and not just Taiwan may need to insure.

Also Read  Mayor Adams clarifies doubts about classes in the face of the wave of COVID-19: "There are no changes, the schools will remain open"

P. Do you share the general idea that politicians and central banks have learned in tackling the pandemic from the lessons of the Great Recession?

R. I think the most important change they made is that they strengthened the financial system with the forced recapitalization of the banking system. But this is a different crisis. In 2010 there were Germans who could say “we haven’t done anything wrong, we don’t need to change anything, so that’s their problem.” Financial crises are divisive between creditors and debtors, and that is very difficult to handle, as it happened in the eurozone debt crisis. Covid is completely different. Affects everyone. If there is any division, it is between countries that handle it well and others that do not, but the differences are not so great between European countries. They all have the same challenges. You cannot say that a country had more infections due to overspending the year before. That makes it much easier to agree on what should be done to support the economy and allows for a very supportive fiscal monetary policy.

P. The prices of commodities, houses, stocks and cryptocurrencies have seen sharp increases. Are bubbles incubating?

R. Some describe it as an omnibubble. A bubble in everything. We have had very low interest rates for a long time. If you think about the situation before the covid crisis, there the rates were already low and the prices of the assets in general high. Furthermore, when monetary policy is accommodative, credit expands strongly, as it did in the early 2000s until the financial crisis stopped it. The problems will come when at some point monetary policy normalizes, interest rates rise, and asset prices fall. And the question is, how big will the crisis that this provokes be?

The answer is that if asset prices fall but people don’t borrow much using their assets as collateral, it doesn’t matter much. They will only be a little poorer than they thought they would be. From what I can see, bitcoin is not bought with debt, so it probably doesn’t matter if the price goes down. Generally, the big problems tend to arise in the real estate market because people use the properties as collateral, so many people go bankrupt because the price of the asset falls below the level of their debt. It is not clear to me how important that problem will be. The other big risk is emerging economies that have borrowed short-term against domestic assets that are not in dollars, because the dollar will likely rise against its currency when interest rates rise in the US.

Also Read  Djokovic's story won't go away, but at the Australian Open the game must go on | Novak Djokovic

P. One of the legacies of the pandemic is increased public debt. Should heavily indebted countries like Spain and Italy be concerned?

R. With current debt levels, real interest rates, and reasonable growth prospects, I think this debt is manageable, although it probably wouldn’t be a bad idea if it were phased out in normal times. Fiscal room for maneuver has shrunk, but in the world we’re living in, where real interest rates are so low and can last, high levels of debt are much more affordable than they used to be, but they do produces an internal crisis in the eurozone that leads to a fiscal crisis, it will be difficult to cope with it.

R. I don’t think a Lehman-type crisis is conceivable in China, unless they are very careless. China has a national financial system. Internationally, it is a large net creditor and has not borrowed much from the rest of the world. So this is an internal event, it is more like Japan in the 90s. If the Chinese government decides that it does not want a financial collapse, it can clearly avoid it. You have full control of most banks and of course the central bank, and you can borrow domestically without limit.

If the bubble bursts, real estate investment could fall and with it consumption, because households will be much poorer. That could cause a shock macroeconomic accompanied by a huge loss of demand. And that would be a momentous blow, so they would have to offset it with government actions of many kinds to sustain demand, and the big question is how they would do it. The last time they had this problem was in 2009 and they fixed it by creating a huge, gigantic construction boom. Now they can’t do this again, and China already has excellent infrastructure.

P. Has the worst happened in Brexit?

R. It is clear that it has already had a negative impact. Investment has been relatively weak in the UK since the referendum, the uncertainty is considerable, the exchange rate has been weaker. All of this reflects a shift away from asset buying and investing in the UK. And they result in an impoverishment of the British. Although this is only a guess, perhaps half of the total impact has already occurred. We have lost immigrants who would have been very useful, and that will be a drag on our economy, we have seen it especially with the lack of truck drivers. Nobody knows what the ultimate losses will be.