Fabián Ros points to the area scorched by the fire. Photo: Paulo Rosas

Read the story in English here.

On Sunday, August 23, around 3 pm, the fire reached the home of Fabián Ros, 53. Until that day, he and his wife, Viviana, had seen several fires and columns of smoke several kilometers from their home , a cabin on La Deseada Island – one of the thousands that make up the delta of the Paraná River. But that day, finally, the fire knocked on his door.

A lagoon located 500 meters east of his cabin, dried up by the historic drought that hit Paraná this year, served as a channel for the further fires to advance. “The lagoon was a sea of ​​straw and dry branches: it was dynamite,” Fabián recalls.

They were not alone. Hours before, they had alerted their children, who live in Rosario –the city that is located right in front of their island– about the situation, as well as other island residents in the area and volunteers. Together, they began to improvise actions to prevent the advance of the fire, which was getting closer and closer.

In the middle of the emergency, two brigades from the National Fire Management Service and one more neighbor, also an expert in fires, arrived. That reassured Fabian. Finally, people with a better strategy. They told the rest that the fire had to be fenced off. Stopping it was impossible, but they could deflect it. They could mount a firewall that would prevent him from moving toward the house.

The fire came from two flanks: north and east. The flames from the north were moving faster. The plan was to fence their path, creating a 10-meter perimeter around the house and putting out the fire with everything available. They started. They used large amounts of water, but also saws and machetes to break up dry branches and logs that could allow the fire to advance. They did it. But after a few minutes, the fire met the eastern flank. They collided. “There everything came, the treetops were lit. But he did not go down and did not reach the house ”.

At 10 meters, people were wetting the house with hoses. From a window, Viviana was throwing buckets of water at the ceiling. They had to keep the house humid to prevent leaves from the burning trees from making contact and ending up igniting everything. “At the most critical moment, a brigadista was only dedicated to walking around the house, looking carefully to detect any sign of smoke.”

By 6 pm, the worst was over. The fire surrounded the entire house and the wind helped deflect it to the opposite side. It continued its course towards the highway that connects the cities of Rosario and Victoria. The worst three hours of Fabian’s life had passed. 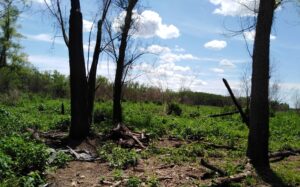 The Paraná delta occupies an area greater than 19,000 km2, distributed among the provinces of Santa Fe, Buenos Aires and, mainly, Entre Ríos. In these islands there is an enormous variety of wetlands, ecosystems inhabited by more than 700 species of plants and a diversity of fauna that includes more than 650 species of animals, not counting a huge number of invertebrates.

Like Fabián, thousands of people inhabit different areas of the Paraná delta. Most are low-income and engaged in activities such as artisanal fishing, hunting, and small farming. There are also those who live and work as stallholders, a kind of keeper of the cattle of entrepreneurs.

But in 2020, this reality was affected by the fires. Although these are not totally foreign to the islands. The park ranger Rogelio Antúnez says that there were always traditional periodic burns, carried out by ranchers to renew forage during the winter. It also warns that there are accidental fires, generated by the carelessness of tourists or the islanders themselves. The normal thing was always that these fires found their end in the natural firebreaks: the arms of the river, the streams and the lagoons. However, this year no one expected a historic drought and downspout unprecedented in 50 years.

“That caused all the firebreaks to dry out, creating a continuity of grasslands. So, people burn as usual, but that small burn becomes a big forest fire, moving to places that no one ever burns, ”explains Antúnez, who has already fought the fire numerous times alongside brigade members and the islanders themselves.

“When there are houses, the situation gets complicated and we have to go to defend them. There are places where the fire gets very big and a house burns, there we try to save the others ”, he laments. However, he is optimistic because he affirms that this situation has brought his institution, the Administration of National Parks, closer to the population of the islands.

Thus, for Eduardo Spiaggi, a doctor in agroecology and researcher at the National University of Rosario, the fires “have revealed the neglect of the State and the lack of public policies towards the sector.” He and his team have been working in the delta since 2007, and he is witness to the little incentive that the state provides for the islanders to stay. “The local population should be the first guarantor of the care of that environment, rather than a park ranger or a technician. The necessary joint work will be very difficult without islanders ”, he estimates.

In sum, until October 17, according to information from NASA’s Fire Information for Resource Management System (FIRMS) software, around 36,000 heat sources were detected in the Paraná delta, each source of heat equivalent to 375 m2. For Natalia Morandeira, PhD in Biological Sciences from the University of Buenos Aires and an expert researcher in the delta, it allows calculating the area affected by the fire: more than 350,000 hectares, equivalent to 3,500km2. Of these, 84 percent of the fires occurred on the islands of Entre Ríos.

Morandeira agrees with Spiaggi that the inhabitants of the islands are the main victims of the fire, above all because they are “totally unprotected” by the State. “There is no access to health or public schools. I believe that it should be one of the priorities in the future to survey the island population, because if not, they will end up depending on the decisions of those who own the land, ”he remarks.

You burn for other purposes

Along these lines, the researcher reported that on some islands in Entre Ríos, located in front of the Buenos Aires city of Ramallo and which were burned in August, some neighbors detected that the territory began to be fumigated and that it is currently being used for large-scale agriculture. scale, an activity that in principle is prohibited in the islands and wetlands of the delta.

“We denounced this on September 16 and until today nothing has happened. While they see if the land holders are in order or not, they allow them to continue advancing with intensive agriculture with agrochemicals in wetlands ”, he questions.

In addition to the economic benefit, there would be a political component. The president of National Parks, Daniel Somma, agrees with the previous diagnoses of Morandeira and Spiaggi and, based on these, states that “continuity can no longer be maintained” with the way in which traditional burning is carried out in the delta.

However, Somma also speaks of “a political intention in the repetition of fire events in front of the city of Rosario.” He considers that the circumstances in which the fires appear are not random and that, added to the uncertainty generated by the Covid-19 pandemic, they contribute to “generating discomfort and a negative predisposition” due to the smoke.

“The fires no longer have to do with agricultural management. It is wanting to repeat the ‘smoke effect’ to affect the city of Rosario. The logical sustenance may be to generate discomfort in the population of the second city [más importante] of the country ”, accuses the official.

The unrest of the city

On August 2, 2020, the IQAir website listed Rosario as one of the cities with the worst air in the world. The city of Santa Fe, the most important in the territory that reaches the Paraná delta, appeared with an air quality index of 152, classified as “harmful to health.” All this, in the midst of the pandemic caused by Covid-19, a respiratory virus.

Between the months of May and October, the population of Rosario had to get used to the smoke generated by the burning. Although it was not something every day, it could happen that one day the city would wake up suffocated by smoke, with the health consequences that this entails: eye and throat irritation, as well as breathing problems, headache, cough and fatigue.

For these reasons, different civil organizations organized to demonstrate against the burning on the islands. One of the most important and that emerged at this specific juncture was the Multisectorial de Humedales. His spokesman Rodolfo Martínez says that on July 11, around 150 people gathered to protest against the burning on the Rosario-Victoria bridge. At the end of the demonstration, a group met in an assembly and decided to create the Multisectorial. At that time, they agreed to continue demonstrating the following weekends in the same place. On August 8, a month later, they had summoned around 5,000 protesters, including people from Victoria.

Already formed, they began to develop a series of activities, such as forming teams of volunteers to help mitigate the fires on the islands. Among its main demands is the search for the approval of a law that protects the delta’s wetlands.

Finally, with regard to justice, a prosecutor and a federal judge from Entre Ríos initiated an investigation into the burns that will seek to determine whether the owners or holders of the affected territories caused the fire knowing the social, ecological and health impact. To date, more than 50 people, including cattle ranchers and landowners, have been called to testify. Of these, he knows that so far only seven are accused of the alleged crimes of “fire or other damage and attack against the safety of ships and aircraft.”

Almost three months after the fire, some burned trees remain standing near Fabian’s house. The green of the terrain, however, has reappeared, as well as the animals that had been driven out by the fire. Fabián knows that the drought will continue until next year and it will be hard. He also knows that it is inevitable that fires continue to appear. “Sure there are interests [detrás de los fuegos], but it is difficult to make a judgment. If the state were present, we could avoid this and discover who are behind each fire.