Read the story in Spanish here.

On Sunday, Aug. 23, around 3 p.m., a wildfire reached Fabián Ros’ house. Until that day, the 53-year-old and his wife, Viviana, had seen various fires and smoke columns several kilometers from their home, a cabin on the La Deseada island––one of the thousands that make up the Paraná river. But on that day, the fires finally reached their front door.

A lagoon located some 500 meters east of their cabin, dried up by the historic drought that hit the Paraná archipielago this year, served as a canal for the fires to advance. “The lagoon was a sea of straw and dried branches: it was dynamite,” Fabián recalled.

But Fabián and Viviana weren’t alone. Hours before, their sons––who live in Rosario, a city located right in front of their island––had warned them, their neighbors and volunteers of the approaching fire. Together, they began to improvise ways to stop the fire as it inched closer and closer.

As they struggled with the flames, three fire experts arrived––a neighbor and two brigade members from the National Fire Management Service. This calmed Fabián. Finally, he thought, people with a better strategy. They told the rest that they needed to fence the fire off. Stopping it was impossible, but they could divert it. They could put up a firewall that would prevent it from advancing toward the house.

The fire was coming from two flanks: one in the north and the other in the east. The flames from the north advanced faster. The plan was to cut the fire off, creating a ten-meter perimeter around the house and putting out the flames with whatever was on hand. They began. They used a lot of water but also saws and machetes to break up dry branches and logs that could have allowed the fire to advance. They succeeded. But after a few minutes, the fire met the eastern flank. “They collided, the treetops came alight. But it did not reach the house,” Fabián remembered.

Some ten meters away, people were spraying the house with hoses. From a window, Viviana threw buckets of water at the roof. They had to keep the house moist to prevent the leaves of the burning trees from reaching the house and burning everything. “At the most critical moment, one of the brigade members had to keep walking around the house, looking carefully to detect any sign of smoke.”

By 6 p.m., the worst had passed. The fire had surrounded the entire house, and the wind helped divert it in the opposite direction. It continued its course toward the highway that connects the cities of Rosario and Victoria. The worst three hours of Fabián’s life had passed. 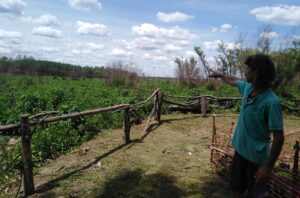 Fabián Ros points to the area scorched by the fire. Photo: Paulo Rosas

The scene of the fire

The Paraná delta occupies an area greater than 19,000 square kilometers, spread across the provinces of Santa Fe, Buenos Aires and Entre Ríos. These islands have a huge variety of wetlands, inhabited by more than 700 plant species and a diversity of fauna that includes more than 650 animal species, not counting a huge number of invertebrates.

Like Fabián, thousands live along the Paraná delta. Most neighbors are low-income workers who dedicate their lives to activities like artisanal fishing, hunting and small-scale farming. There are also some who live and work as stallholders, a kind of keeper who cares for local entrepreneurs’ cattle.

But, this year, their lives were affected by the fires like never before, although these fires are not totally foreign to the islands. Park ranger Rogelio Antúnez recalls that there have always been some periodic burning in the region, carried out by local farmers to renovate the pasture during the winter. He also recalls that there are sometimes some accidental fires, incidentally started by tourists or even the locals. Usually, these fires burn out once they meet the region’s natural firewalls: the rivers, the streams and the lagoons. However, no one expected there to be a historic drought this year that would lower the river’s water level to a degree not seen in 50 years.

“That caused all the firewalls to dry up, creating a continuity of grasslands. So, people kept burning as usual, but those small fires began to turn into huge forest fires, moving to places that no one ever burns,” said Antúnez, who has fought against fires many times along with brigade members and locals.

“When there are houses, the situation becomes more complicated, and we have to defend them. Sometimes the fires become too big and burn a whole house. In that case, we look to save the others,” he lamented. However, he is optimistic because he believes that this situation has brought his institution, the Administration of National Parks, closer to the people who live on the islands.

For Eduardo Spiaggi, a doctor in agroecology and researcher at the National University of Rosario, the fires “have revealed the neglect of the State and the lack of public policies directed toward the sector.” He and his team have worked in the delta since 2007, and he is witness to how little incentive the State provides for the islanders to stay and protect the region. “The local residents should be primarily responsible for the care of that environment, rather than a park ranger or a technician. The necessary joint work will be very difficult without the islanders’ input,” he estimated.

Up until Oct. 17, a total of around 36,000 heat sources were detected in the Paraná delta, according to data from NASA’s Fire Information for Resource Management System (FIRMS) software. Each heat source is equivalent to 375 m2. Natalia Morandeira, a doctor in biological sciences from the University of Buenos Aires and a researcher who specializes in studying the delta, has calculated the area affected by the fires to be over 350,000 hectares, or 3,500 km2. Out of this area, 84% of the fires were in the Entre Ríos islands.

Morandeira agrees with Spiaggi in that the local residents are the primary victims of the fires, above all because they are “totally unprotected” by the State. “There is no access to health services or public schools. I think that one of the priorities for the future should be to survey the islanders because, if not, they will end up depending on the decisions of those who own the land,” she said.

A different kind of fire

To that end, Morandeira denounced that on one of the Entre Ríos islands, located in front of the Buenos Aires city of Ramallo and which burned in August, a neighbor noticed that the territory was being fumigated and that it is currently being used for large-scale agriculture, which is banned in the islands and wetlands of the delta.

“We denounced this on Sept. 16, and nothing has happened. While they wait to see if the land titles are in order or not, they are allowing them to continue with this large-scale agricultural project that intensely relies on the use of agrochemicals in these wetlands,” she said.

Beyond an economic benefit, there is also a political component. The president of the national parks, Daniel Somma, agrees with Morandeira and Spiaggi’s assessments and adds that “continuity can no longer be maintained” in the way in which traditional burning is carried out in the delta. “My perspective is that we have to organize ourselves in the use of fire in the delta through a system of planned prescribed burning,” he said.

Still, Somma also speaks of a “political motive in the repetition of fires in the city of Rosario.” He believes that the circumstances in which the fires start are not random and that, compounded by the uncertainty generated by the COVID-19 pandemic, they contribute to “generating discomfort and a negative predisposition” due to the smoke.

“The fires are no longer related to the agricultural management. They are driven by the desire to repeat the ‘smoke effect’ to affect the city of Rosario. The logical sustenance may be to generate unrest in the population of the second [most important] city in the country,” the official denounced.

On Aug. 2, the IQAir website listed Rosario as one of the cities with the worst air in the world. The Santa Fe city, the most important in the territory and which reaches the Paraná delta, registered an air quality index of 152, which is categorized as “harmful to one’s health.” All the while, this is all occurring in the midst of a pandemic caused by coronavirus, a respiratory virus.

Between May and October, the residents of Rosario had to get used to living with the smoke from the fires. Though the fires weren’t a daily occurrence, the city woke up and was asphyxiated by the smoke and the health consequences that that entails: eye and throat irritation, as well as breathing problems, headaches, cough and fatigue.

In response, various civil organizations planned a protest against the fires on the islands. One of the most important demonstrations was the Wetlands Multisectoral, a multisectorial protest against fires in the wetlands. Some 150 people joined the demonstration on Nov. 11 on the Rosario-Victoria bridge, according to the movement’s spokesperson Rodolfo Martínez. At the end of the protest, a group got together and decided to create the Multisectoral. At that moment, they agreed to continue protesting in the same place the following weekends. On Aug. 8, a month later, they managed to get 5,000 people to come out and protest, including people from Victoria.

From then on, they began to develop a series of activities, such as forming volunteer groups to help mitigate the fires on the islands. Among their primary demands is the approval of a law that protects the delta’s wetlands.

Finally, with regard to the justice system, a prosecutor and federal judge from Entre Ríos opened an investigation into the fires to determine where the owners or holders of the affected territories caused the fires, knowing their social, ecological and health impact. To date, more than 50 people, including cattle ranches and landowners, have been called forth to testify. Of these, seven have been charged with the alleged crimes of “arson or other damage and an attack against the safety of ships and aircrafts.”

Almost three months after the fire, some charred trees remain standing near Fabián’s house. The green of the terrain, however, has reappeared, as well as the animals that had been driven away by the fires. Fabián knows that the drought will continue until next year, and it will be difficult. He also knows that the fires are inevitable. “I’m sure there are interests [behind the fires], but it’s difficult to pass judgement. If the State were present, we could avoid this and find out who is behind each fire.”

Paulo studied journalism at Antonio Ruiz de Montoya University in Lima, Peru. He worked as an entertainment reporter for news website Terra Peru before becoming a politics reporter at the Peruvian national newspaper “El Comercio.” He is now completing a master’s in Political and Social Theory in the University of Buenos Aires. As a freelance journalist, he has contributed to newspapers including “Estadao” de S. Paulo (Brazil), “El Ciudadano” (Argentina), “El Comercio” (Peru), “Peru 21” (Peru), and “La República” (Peru) among others.