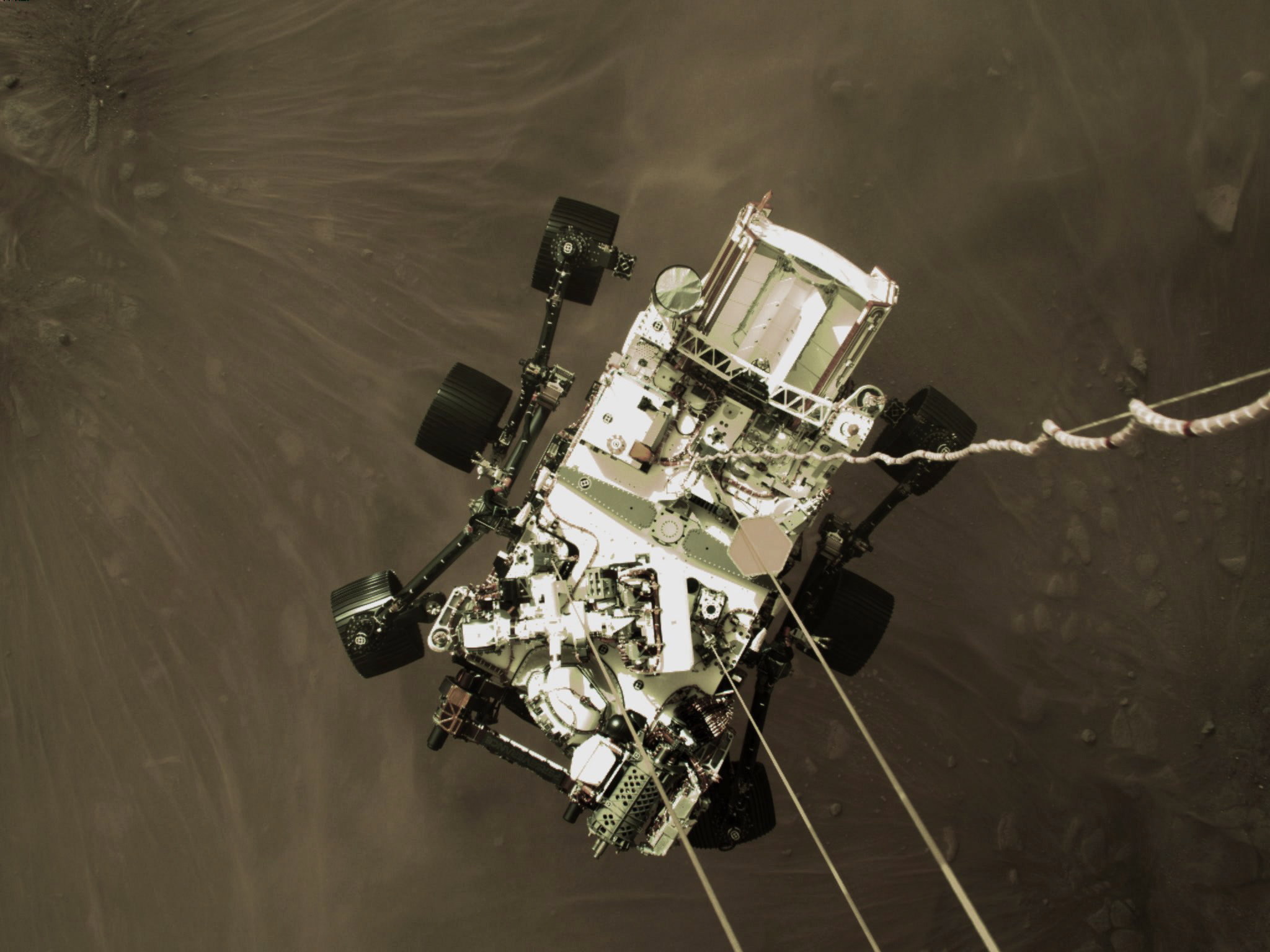 Mars already has color. The exploration vehicle team Perseverance has published the first images with different shades of the red planet taken from the Jezero crater. The largest exploration mission to Mars in history landed around 10:00 p.m. this Thursday (Spanish peninsular time) with the aim of finding traces of life in what was the bed of a lake millions of years ago. This is NASA’s most ambitious mission yet. “I still don’t believe it; it is that entering Mars at 20,000 kilometers per hour and that nothing has been damaged is surprising ”, acknowledges the mission’s flight director, Diana Trujillo.

“Perseverance it is alive on the surface of Mars. ” This is how the landing of the vehicle in a crater in the northern hemisphere of the planet was announced in the control room of the US space agency, to applause from the mission team. The Perseverance —A prodigy of the one-ton technique developed by the United States together with other European countries, including Spain — is a six-wheeled car equipped with seven scientific instruments. It is the heaviest, most complex and expensive vehicle that NASA has sent to the surface of Mars: about 2.2 billion euros. According to the mission’s flight director, the device has all the necessary technology to find traces of microbial life from billions of years ago in said crater. “It is a special place because everything indicates that a river flowed there. It is a crater of approximately 45 kilometers in diameter. If you look at the photos, it looks like a fan, like a place where the water and sediments have spread, ”says Trujillo.

Also Read  An exhibition confronts the work of Pinazo, Sorolla and Mongrell

The mission’s goal is to search for signs of ancient microbial life, collect and bring back samples of rock and regolith (broken rock and dust), characterize the geology and climate of Mars, and pave the way for human exploration ‘in situ’. The official mission will last a little less than two years, although it will probably last much longer. “What we are going to do the first two weeks are checks to see that nothing in the robot has been damaged. Once we verify that all the systems are working perfectly, we are going to start touring the crater and collecting samples to bring them to Earth, study them and define once and for all if there was life ”, adds Trujillo. “We believe that the best places to look for life markers in Jezero will be the bottom of the lake or the shores, where there could be carbonate minerals, which tend to preserve certain fossils very well”, explains Ken Williford, one of the scientists of the mission, in a press release from NASA. “But we must remember that we are looking for primitive microbes in an alien world,” says Williford.

The ship carries cameras that recorded the arrival to the red planet and also microphones that record the sound of the planet. The scientific and technical team will take a little over a month to verify that all the systems in the Perseverance function properly before starting the operations phase. On this occasion, NASA has equipped its vehicle with a fast-moving mode that will allow it to cover much more distance in a short time. Among the countries that have participated in the mission is Spain, since one of these seven instruments of Perseverance is MEDA, the advanced meteorological station that will study the Martian atmosphere and the dust that covers the surface.

One of the main targets within the Jezero crater will be the old delta that formed the river that emptied into the great lagoon. If all goes well, those in charge of the mission want to visit the area of ​​the crater through which the old river entered and, later, go to the other area of ​​the hole through which the waters flowed. They are the most interesting places where there may still be organic molecules or minerals that could prove that there was life on Mars.

Perseverance He is going to prepare the ground for a more ambitious future goal: to bring earth and rocks from Mars for the first time. The car is equipped with a system to select the most interesting samples, seal them in a metal container and leave them on the surface. In the future, other missions would come to collect them. The reason is simple: no matter how advanced the instruments on board this vehicle are, proving beyond any doubt that fossils or traces of life have been found is a task that can only be done on Earth.