A south Florida man, who died in July after eating raw oysters that contained a dangerous bacteria from warm seawater, had cocaine, cannabis and fentanyl among other drugs in his system, a medical examiner’s report has revealed.

An autopsy for Roger ‘Rocky’ Pinckney, 44, concluded that oxycodone, and opiates were also found in his body after his death on July 31, the Broward County Medical Examiner said.

Other than testing positive for drugs in his system, the medical report said that Pinckney’s blood had vibrio vulnificus, a pathogenic bacterium that causes an infection often incurred after eating seafood, particularly raw or undercooked oysters.

The Centers for Disease Control and Prevention says the bacteria doesn’t make an oyster look, smell, or taste any different. It added that about 80,000 people get vibriosis in the US each year, and about 100 people die from it. Symptoms include vomiting, diarrhea, and abdominal pain.

Pinckney was celebrating his 44th birthday at the Rustic Inn in Fort Lauderdale when he consumed the oysters from Louisiana.

He had been enjoying the celebratory dinner with his daughter Jaelyn on July 21 but two days later he arrived at Memorial Pembroke Hospital with a fever and abdominal pain, reports the South Florida SunSentinel.

Roger Pinckney, 44, had drugs in his system, including cocaine and fentanyl, a medical examiner report revealed. He fell ill after eating a ‘one in a billion’ bad oyster at the Rustin Inn Crabhouse in Fort Lauderdale, Florida, while celebrating his birthday. He underwent a series of emergency surgeries and a double amputation before he died on July 31 Pinckney had eaten oysters that had come from Louisiana before becoming infected with vibrio, a bacterium typically caught from eating raw or undercooked seafood (stock image) 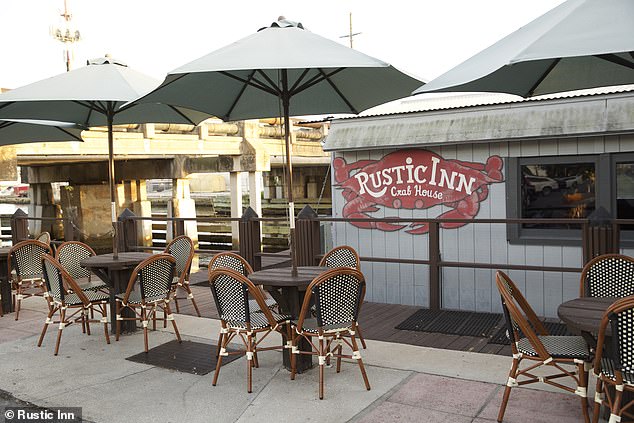 Pinckney, who is known as Rocky by friends and family, died weeks earlier on July 31 after eating oysters at the Rustic Inn in Fort Lauderdale in celebration of his 44th birthday

Vibriosis is a disease triggered by consuming the Vibrio bacteria.

Normally, this is ingested through eating raw or undercooked seafood. However, it can also be caught from exposing damaged skin to seawater.

But in most cases the illness remains mild and clears up in three days without treatment.

Depending on the strain, up to a third of people infected may die from the disease.

In some cases antibiotics may be used to fight off the infection.

About 100 people die from illness in the US every year.

He tested positive for vibrio and underwent a series of emergency surgeries and a double amputation before he died on July 31.

Gary Oreal, who manages the Rustic Inn, told the newspaper that Pinckney had worked years ago at the restaurant.

‘Over the course of 60 years, we have served a couple billion oysters, and we never had anyone get sick like this guy did,’ Oreal said.

Inspectors from the Florida Department of Health checked out the restaurant’s kitchen and examined its oyster inventory the day after Pinckney became ill, Oreal told the newspaper.

‘We passed with flying colors and we were allowed to continue to sell oysters,’ he said, adding the oysters being served currently are from Louisiana.

‘If there was a problem with the oyster bed we would know it because others would have gotten sick.’

The restaurant has a sign warning patterns about the risks of eating raw shellfish.

‘Oysters are top of the mountain for dangerous foods to eat,’ Oreal said. ‘I have eaten them my entire life, and will continue. But you are putting yourself at risk when you do it.’

Pinckney has been described as a ‘hard-working kid’ by his father.

‘He was the life of every single party,’ said Pinckney’s daughter Jaelyn, who had been eating at the Rustin inn with him. ‘Never a single moment of just boring around him.’ 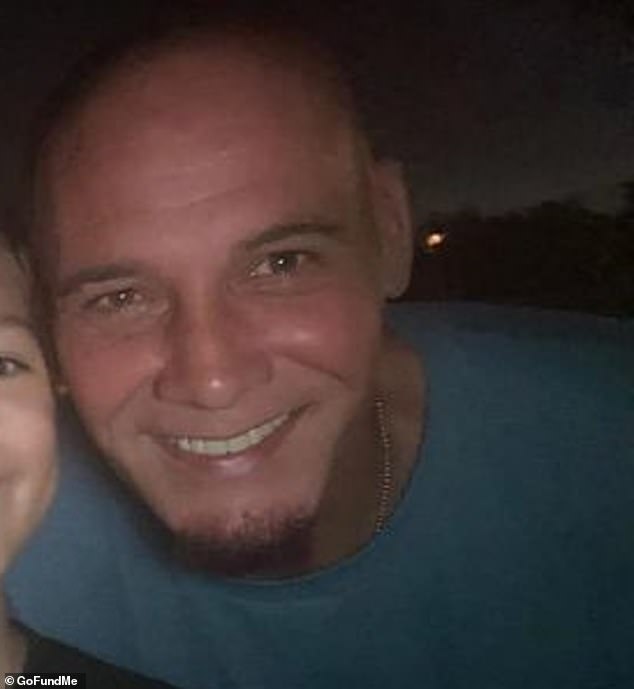 Pinckney, who is known as Rocky by friends and family, died weeks earlier on July 31 after eating oysters at the Rustic Inn in Fort Lauderdale in celebration of his 44th birthday

Despite Jaelyn and other customers in the restaurant eating oysters on that night, no one else became sick.

Jaelyn visited her father at the hospital every day before he died.

‘It still doesn’t feel completely real,’ she said. ‘I don’t know how an oyster could cause all of this.’

Pinckney’s family paid tribute to him in a GoFundMe post, describing him as a ‘fighter’.

They wrote: ‘Rocky fought till the very end — so much so, that none of us thought it was the end just yet. Rocky will be deeply missed and his legacy of him and all our memories with him will live on.

‘We are continuing this fundraiser to help with his two beautiful children, Jaelyn and Austin.

‘We love you Rocky.’ 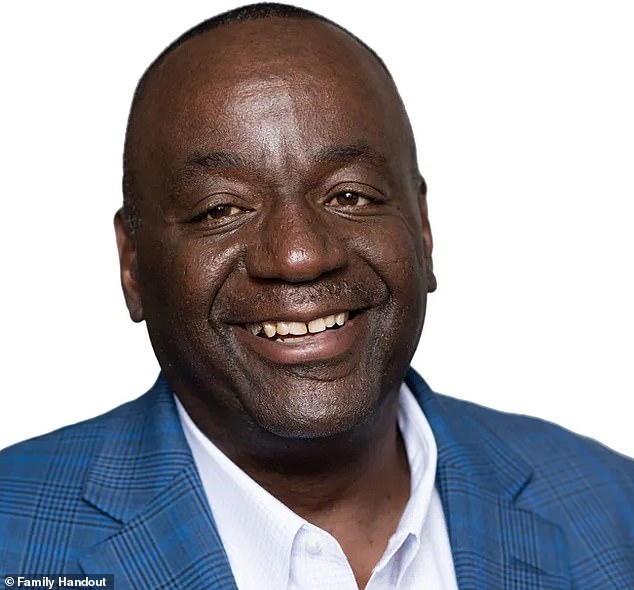 Rodney Jackson, 55, became sick after contracting the bacteria from oysters he bought at a market in Pensacola, Florida, and later died in hospital on August 9. He was a beloved Air Force veteran who spent much of his life working in banking 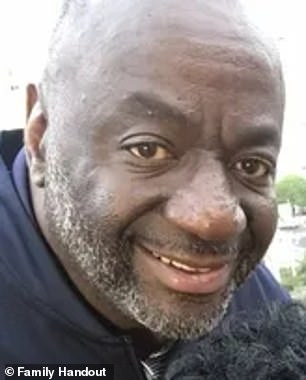 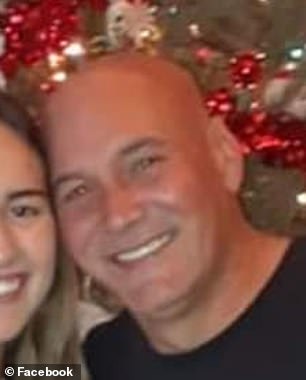 The Centers for Disease Control and Prevention says Vibrio bacteria doesn’t make an oyster look, smell, or taste any different. The agency said about 80,000 people get vibriosis in the US each year, and about 100 people die from it

Meanwhile, nine days after Pinckney’s death, an Air Force veteran had become the second man to die in the Sunshine State from the same bacterial infection after eating raw oysters from Louisiana.

Rodney Jackson, 55, became sick after contracting the bacteria from oysters he bought at a market in Pensacola and later died in hospital on August 9.

Jackson, who was a husband, father and grandfather, became sick earlier this month after eating the oysters he bought from a market before he was rushed to Ascension Sacred Heart’s ICU where he died.

‘You just have to know Rodney. That was always his passion — to help people, to help the community, his wife, Patricia, told the Pensacola News Journal.

‘His character and his compassion will always will always live with all of us,’ Pastor Marcel Davis, who had been friends with Jackson for over 20 years, told WEAR TV.

Before his death, Jackson, a US military veteran had moved back to Pensacola with his family to work for the Studer Community Institute, which helps local businesses grow.

The institute’s president, Rachael Gillette, told WEAR TV that they will continue their work and legacy.

She added: ‘He’s really helped businesses that were struggling and didn’t know where to turn. Rodney’s been a beacon of hope for them in this community.’ 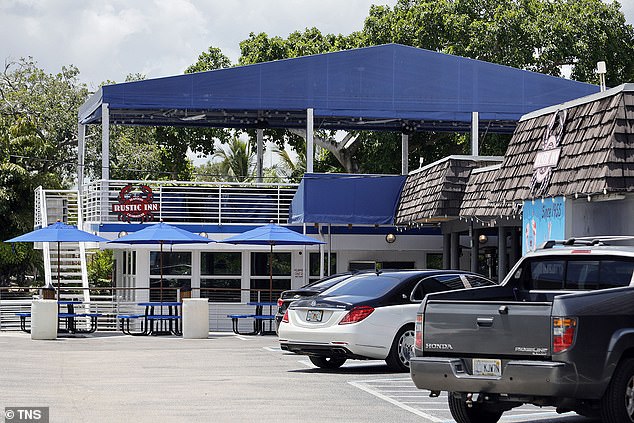 The Rustic Inn Crabhouse, where celebrities like LeBron James and Blac Chyna have dined on previous occasions

Celebrities including LeBron James and Blac Chyna have frequented the Rustic Inn before eager to try its famous garlic crab. It is also claimed locally that Johnny Depp once worked there as a busboy.

The Florida Department of Health says 26 people have become infected with the bacteria and six of them later died after eating raw shellfish, including oysters, so far this year. In 2021, 10 people died out of 34 people sickened. In 2020, there were seven deaths among the 36 who became ill.

Infections linked to the bacteria are common in oysters and raw seafood during the summer months when water temperatures are warmer, University of West Florida Professor Robert ‘Wes’ Farr said.

‘Serious infection is rare, but the risk is still there,’ Farr said.

Can you really only eat oysters in ‘R’ months?

According to folk tradition, you should only eat oysters in months where there is an ‘R’ in their name.

Foodies following the myth should therefore avoid eating fresh oysters in the months of May, June, July, and August.

This is meant to be so you avoid watery shellfish, or worse, a nasty bout of food poisoning.

Traditionally, the myth comes from the fact that in the warmer summer months, it’s harder to keep raw fish fresh.

But with modern refrigeration, the issue of keeping oysters fresh on ice is minimal.

A study suggests people have been following this ‘R month’ practice for at least 4,000 years.