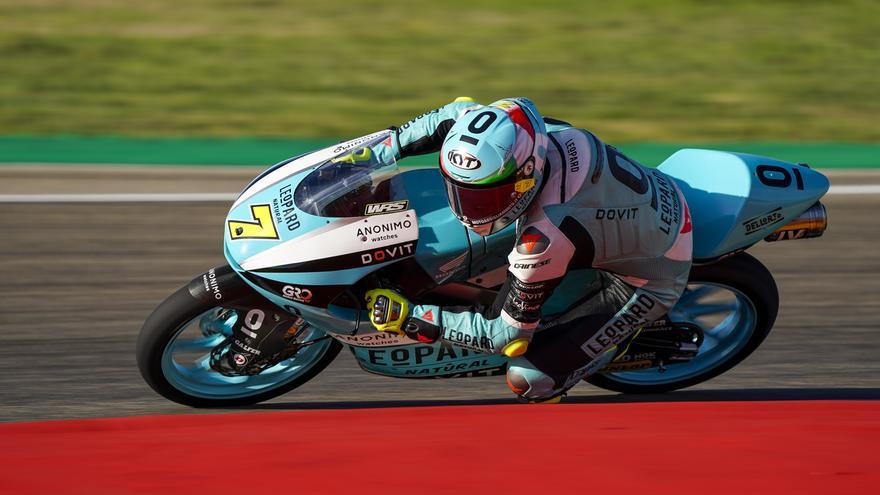 The Italian Dennis Foggia (Honda) achieved his third victory of the season and the fourth of his sports career by winning the Moto3 Grand Prix of Aragon at the Motorland circuit, in Alcañiz, where the Spanish Pedro Acosta (KTM) and Sergio García Dols (Gasgas) they failed and did not achieve a single point.

The world leader he was the first to make a mistake and roll on the floor with no possibility of continuing into turn five, While in the case of the second classified in the championship, his error came on the last lap, five corners – twelfth turn – from the end and although he recovered from the crash and was able to start the bike, he did not score a single point.

Pedro Acosta made his first mistake of the year and went to the ground. The World Cup was shaking. And on the last lap, Sergio García also fell.

Who has designed the script for this championship? 😱#AragonGP 🇪🇸 #MotoGP 🏁 pic.twitter.com/EoZJLGfOjI

In the provisional classification of the World Cup everything continues, with Pedro Acosta leader with 201 points, 46 more than Sergio García Dols, who now has a twelve-point advantage over the third place, and the Italian Dennis Foggia.

The South African Darry Binder (Honda) came out like an exhalation chased by the Spanish Sergio García Dols (Gasgas) and the Hispanic Argentine Gabriel Rodrigo (Honda) in his wake, while the world leader, the Spanish Pedro Acosta (KTM), that started from ninth place, third line of the starting formation, gained a position in just a couple of curves.

Before completing the first turn Sergio Garcia Dols tried to be the leader but “slipped” and lost a couple of positions in favor of Rodrigo and Binder, that is how they completed the initial lap, with the Japanese Tasuki Suzuki (Honda), the Italian Andrea Migno (Honda) and the Spanish Jeremy Alcoba (Honda), behind them.

Rodrigo and Binder engaged in a particular duel for the lead, although persecuted by the entire main group, in which Pedro Acosta He had already managed to regain another position to be seventh and at the end of the second round he was already sixth, but with a tough fight with both Jeremy Alcoba and the Turk Denis Öncü (KTM) and a first relevant casualty a little further back, that of the Czech Filip Salac (Honda).

Dennis Foggia win! Third of the season! What an overtaking on the last lap !! 👏👏👏#AragonGP 🇪🇸 #MotoGP 🏁 pic.twitter.com/mK5uFQCTb5

At the head of the race they alternated in the lead Sergio García, Denis Öncü and Darryn Binder, while Gabriel Rodrigo starred in a “touch” with another driver that made him fall to twelfth position on the fourth lap, despite having starred in one of the fastest laps of the race, and Pedro Acosta was already in fourth position.

Up to fourteen pilots made up the main group, which ranged from Pioneer to Izan Guevara (Gasgas) and from which the Argentine Hispanic Gabriel Rodrigo fell, involved in an accident with the Italian Romano Fenati (Husqvarna) at turn seventeen, from which the transalpine was able to recover, although in very backward positions.

At a fast lap pace in several of the laps, Izan Guevara was climbing positions in the leading group to get ninth in the seventh lap, with Denis Öncü setting the pace in front of it and Pedro Acosta trying to stay between the top positions to try to avoid surprises at the end.

Just two laps later Be Guevara He was already in fourth position, showing great potential, although his rivals did not seem to show signs of weakness either.

With Pioneer leader, in his wake was Xavier Artigas (Honda), that one lap later he became the leader, Sergio García and Izan Guevara, with Dennis Foggia and Pedro Acosta behind them, in a main group that had already been reduced to eleven members.

The Spanish Carlos Tatay (KTM), who was sixteenth, crashed into turn five and although he tried to continue with the help of the track controls to clean the underside of his motorcycle’s fairing of gravel, he could not continue, although he returned to his workshop on the motorcycle.

Denis Öncü he stood firm at the front of the race, responding to all the attacks of his rivals, waiting for the last laps, but on the sixteenth lap Pedro Acosta he hit the ground at turn five and Xavier Artigas couldn’t dodge him.

Although the world leader tried to start his motorcycle and could not continue, and neither could Artigas, which cleared the way for Sergio Garcia Dols to reduce considerably the differences in the championship, since it is the first time that Acosta does not score so far this season.

Sergio Garcia Dols realized the situation and rushed to find a good position to try to win the race, although neither Foggia ni Pioneer They were going to make it easy for him, and neither would his own teammate, Izan Guevara, which perhaps led to an increase in the Spanish’s nerves, who made a huge mistake and went to the ground at turn twelve and although he tried to continue he finished eighteenth , losing a golden opportunity to cut differences to the leader of the championship.

Two curves from the end Dennis Foggia the leader of the race got inside the line, Denis Öncü, to be he who, after closing all the gaps to his rival, rose with victory, ahead of the Turkish, the Japanese Ayumu Sasaki and of the Spanish Izan Guevara.