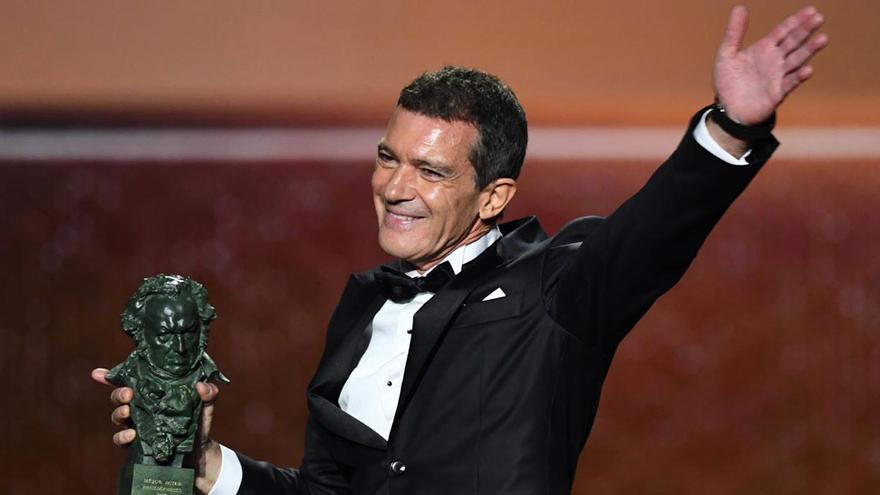 The Soho CaixaBank Theater in Malaga today hosts the award ceremony of the Goya Awards 2021. The organization has thrown the house out the window to achieve a gala of height and thanks to the agenda of Antonio Banderas, in this edition, the great festival of Spanish cinema will have the intervention of international actors of the stature of Robert de Niro, Al Pacino, Dustin Hoffman, Helen Mirren, Charlize Theron, Isabelle Huppert, Monica Bellucci, Salma Hayek, Sylvester Stallone, Benicio del Toro, Emma Thompson, Ricardo Darín or Laura Dern.

You can follow the gala live in our special, where we will tell you all the details of the event and you can enjoy the best images of the Red carpet and of winners of the night.

Nominees in their homes miles away, a reduced red carpet and Hollywood stars via telematics are some of the keys to the 35 Goya Awards that will be celebrated with a harvest of films that is more than remarkable for the debacle that 2020 has been for him. cinema in general.

Mariano Barroso, the president of the Film Academy, has summed it up in one sentence: If the Goya have always been “the party” of Spanish cinema and at the same time a television show, this year they will only be the latter.

1.- Gala ‘covid’, without audience or nominees

For the first time in the history of the Goya Awards, the most important event in Spanish cinema of the year will be held without the physical presence of the nominees, who will connect with the Soho Theater in Malaga telematically, from their homes or in hotels.

There will be no public or political representation of any kind, but a select group of ‘deliverers’ – from Pedro Almodóvar to Penélope Cruz or Marisa Paredes – that will put the note of ‘glamor’ on the red carpet. All those who participate in the gala will be tested for covid-19.

2.- The context: Closed cinemas and box office at SOS

More than half of Spanish cinemas, 57%, remain closed due to the pandemic, although the reopening is expected this month. 2020 closed with a global drop in box office revenues of more than 72% and although the balance of Spanish cinema is somewhat better (it fell by 55%), it is still a disaster.

However, the filming machinery has not stopped, readapted to the new sanitary circumstances. Directors like Isaki Lacuesta, Álex de la Iglesia, Icíar Bollaín and Jaime Rosales have started filming in 2021 and Pedro Almodóvar is about to do it.

Antonio Banderas had an ace up his sleeve until the last moment, when he announced that some of his friends had recorded video messages for the Goyas. Those friends are none other than Robert de Niro, Al Pacino, Dustin Hoffman, Helen Mirren, Charlize Theron, Isabelle Huppert, Monica Bellucci, Salma Hayek or Sylvester Stallone, among others.

These are the themes that stand out this year among the five finalists for best film: “Adú“It is an immigration story directed by Salvador Calvo, a favorite with 13 nominations;”Girls“, an awakening of innocence in Zaragoza in 1992, directed by Pilar Palomero, is on his heels with 9 and the advantage of having won the Forqué for best film and the Golden Biznaga in Malaga, in addition to three Feroz awards obtained this same week for best dramatic film, best direction and best screenplay.

The other three candidates for best film are “Ane”, a debut by David Pérez Sañudo about a mother-daughter conflict involved in Basque street protests; “Rosa’s wedding”, a woman in conquest of her freedom, by Icíar Bollaín, winner of the Feroz award for best comedy film, and “Sentimental”, a comedy by Cesc Gay about a relationship crisis.

5.- The novices to the assault and parity in direction

Two of the five nominees for best film correspond to new directors – “Ane” and “The girls” – redoubling a trend that has been pointing in recent years.

Another growing trend is that of women in management: this year parity has been achieved in both better management – with Icíar Bollaín and Isabel Coixet (“Snow in Benidorm”), compared to Salvador Calvo and Juanma Bajo Ulloa (“Baby “) – as in new direction -Pilar Palomero and Nuria Giménez (” My mexican bretzel “), opposite David Pérez and Bernabé Rico (” The inconvenient “).

6.- The documentary leaves the confinement

The documentary field, in its broadest and most creative sense, has been particularly flourishing in the last year and the proof is that two of the nominees for best documentary have also been finalists in other categories.

The case of Nuria Giménez with “My mexican pretzel” it has obtained a nomination for best new director, something unprecedented in the history of the Goya, and “The year of discovery” by Luis López Carrasco, which also aspires to the Goya for best montage.

The other two finalists for best documentary have also been the highly applauded “Anatomy of a dandy”, an accurate portrait of the writer Francisco Umbral directed by Alberto Ortega and Charlie Arnaiz, and “Wet letters”, by Paula Palacios, a look at the epic most tragic of our days, that of immigrants who die at sea trying to reach Europe.

It has been difficult for him to leave behind the label of adolescent idol, but this year it has meant the consecration of Mario Casas as an actor, with no less than three films released: “Home”, “The Practitioner” and “You will not kill.” The latter is the one that has earned him the Goya nomination for best actor.

Casas takes the role of Dani, a shy boy whose life is turned upside down in one night in the film directed by David Victori. His rivals are weighty: the much loved Javier Cámara (“Sentimental”), Ernesto Alterio (“A normal world”) and David Verdaguer (“One for all”)

8.- From Candela Peña to Patricia López, a disputed Goya

Candela Peña is one of the best actresses in recent Spanish cinema -and one of the most beloved by the public- and this is proven by the three Goya awards that she already has at her home, the first thanks to Icíar Bollaín herself (“I give you my eyes “, 2003).

His statements on stage each time he has picked up a Goya have brought a tail, so there will be expectation if he does it again, but he has a tough rival to crack, Patricia López Arnaiz, who is adding awards and recognitions with “Ane”, in addition by the veteran Kiti Manver (“The inconvenience”) and the young Amaia Aberasturi (“Akelarre”).

Goya gambling fans have a guaranteed result this year, “La gallina Turuleca”, directed by Victor Monigote and Eduardo Gondell, which is the only nominee in the category of best animated film.

The great honoree of the night will be Ángela Molina, Goya of Honor 2021 for a career that has led him hand in hand with directors such as Buñuel, Almodóvar, Borau and Gutiérrez Aragón.

In addition, on the occasion of the Berlanga Year there will be a tribute to the Valencian filmmaker in which the singer Diana Navarro and the humorist Carlos Latre characterized by Pepe Isbert will participate.