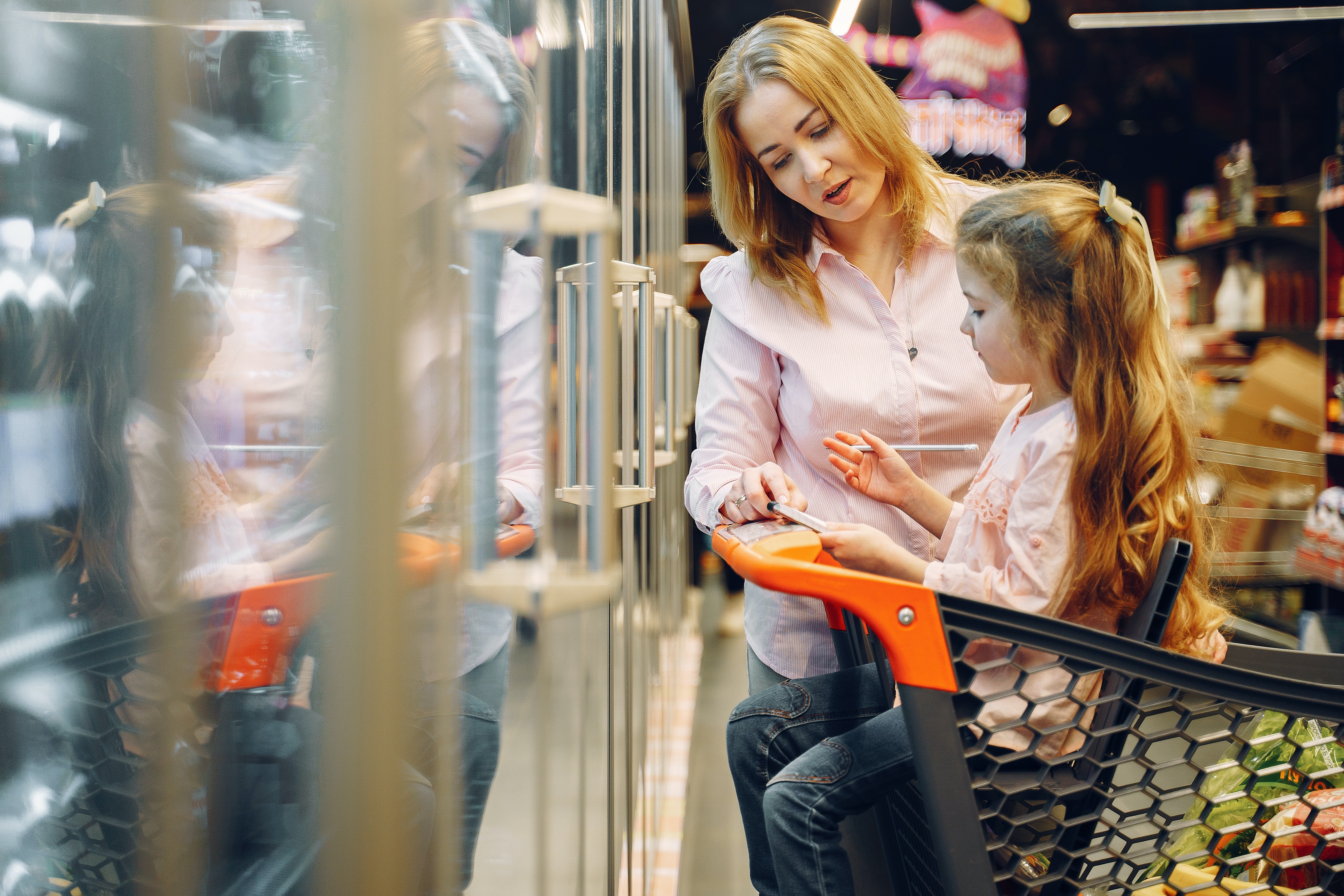 Venturing across the aisles of the supermarket with your children and reaching the line of boxes loaded with good food choices has become a real challenge. There, each aisle is a trompe l’oeil that plays with us: the products on its shelves want to be good, they make us believe it, but most of them are not. They are disguised with eye-catching images and reassuring messages such as “no palm fat”, “no added sugars”, “less sugar”, “flavor and nutrients”, “vitamin enriched”. And it works: many of these products are not only not perceived as unhealthy, but have managed to pass as healthy foods. Shopping has become a show of illusionism. What must a family know to be able to see reality without deception? What would help us make better purchasing decisions? Today, in order to see a reality without deception, it is necessary to remove the glasses of nutritional education. Because our choices depend, in part, on having learned to read labels – and spending a bit of time reading them – on having the ability to flee from claims hypergoers and getting to ignore sponsored stamps and toys mainstream. But it is not only our responsibility.

Responsibility is not just individual

According to the report The State of the World’s Children 2019 from UNICEF, it is estimated that, worldwide, 149 million children under the age of five suffer from chronic malnutrition and 49 million suffer from acute malnutrition. At the other extreme, 40 million children under the age of five and more than 340 million children and adolescents between the ages of five and 19 are overweight or obese. UNICEF warns that in 2022, the child and adolescent population with obesity will exceed those suffering from malnutrition. In Spain, according to Aladdin study On Food, Physical Activity, Child Development and Obesity in Spain in 2019, 40.6% of children between 6 and 9 years old are overweight or obese. Given these data, are the appropriate measures being taken?

In December 2020 the article Malnutrition: the silent pandemic showed how the pandemic had evidenced the role of nutritional status in resilience to infection. “Overweight and obesity and its comorbidities, including diabetes and heart disease, are known risk factors for COVID-19, increasing the risk of infection and serious complications. Obesity is also significantly associated with the need for intensive care treatment in children admitted to hospital for coronavirus ”. Although ending malnutrition in all its forms is fundamental to ending health inequalities, it is not an easy path, since, as the authors of the article point out, “in all forms of malnutrition there are economic and economic models. social organizations that promote profit over social prosperity and do little to achieve it ”. This idea could be summarized in a reflection by Margaret Chan, who was director of the WHO from 2007 to 2017: “If an industry is involved in the formulation of Public Health policies, rest assured that the most effective measures will be or either minimized or set aside in its entirety ”.

For Juan Revenga, dietician-nutritionist, “there is an unsolvable incompatibility between the commercial interests of the food industry and the health of the population.” This, according to Revenga, has been clearly seen with the implementation in Spain of Nutriscore, a Front Nutrition Labeling (FOPL) tool that rates food according to its quality. “Although initially it could be considered as a public health tool to help the population make better purchasing decisions, the truth is that it has served to create even more confusion thanks to a food industry that has used system failures to passing off as healthy foods that are not healthy, “he says. Here would be, for example, ultra-processed products that have achieved a letter B in Nutriscore, such as some versions of shakes or soft drinks. “In general, we do not turn the packaging around to read the labels and we lack food education, so we end up relying on a labeling that also has the approval of the institutions,” adds the dietician-nutritionist, who recently participated in the Dialogue on Front-End Nutrition Labeling as a weapon for consumer empowerment and a healthier food system, which is part of the Summit of the United Nations food systems to be held next September.

Warning and restriction stamps for marketing to children

Juan Revenga considers that there are other front labeling systems that, unlike Nutriscore, have proven to be a useful tool to empower families in their purchasing decisions. As an example, the analysis you did Sofia Boza, professor at the Faculty of Agronomic Sciences of the University of Chile, during the aforementioned dialogue organized by Team Europe: Warning frontal nutritional labeling: reflections from Chile. “After almost 10 years of discussion, given that it was a pioneering initiative worldwide and that raised a lot of controversy both at the national level (especially the food industry) and internationally (within the World Trade Organization), it began its gradual implementation, with increasingly demanding thresholds for critical nutrients (saturated fat, sodium, sugar and energy) ”, says Boza. Unlike systems such as Nutriscore or the nutritional traffic light, Chilean warning stamps are similar to a black STOP sign with the initials ALTO EN. So the message was sought to be as direct and clear as possible.

The evaluations that have been made so far have seen that a high percentage of consumers consider warning stamps when making their purchasing decisions and that the industry made a high number of reformulations to avoid the stamps. In addition, according to the expert, at the aggregate level there were no economic losses for the food sector, such as job losses related to labeling. Despite this, Sofía Boza recalls that Chile continues to be the OECD country with the highest level of overweight and obesity, and the effects of labeling will take time to be perceived. In addition, he adds that complementary measures such as food education for families or improving food environments are necessary.

The wide offering of unhealthy products that we find around us and the marketing that accompanies them contribute to the creation of an obesogenic environment. Marketing that fuels our temptation and is present in a supermarket aisle, on television, at a bus stop. Should the marketing of unhealthy products to children be restricted? In Sofía Boza’s opinion, the answer is clearly yes. In fact, that was one of the novelties that were regulated in Chile along with front labeling. “Advertising of any product with a warning seal was prohibited for children under 14 years of age, gifts cannot be associated with them and allegorical elements such as cartoons cannot be used. In addition, within schools you cannot sell products with warning stamps, and in many establishments it is also forbidden for children to take them as a snack ”. Regarding food education, in Chile the issue of stamps is included in the curriculum from the pre-school level, so that children know them and know what they mean. For Juan Revenga the key is this: to control the means through which they reach children. “With measures like those in Chile, manufacturers of unhealthy products lose the power to reach children at home (on the tablet, on TV …) and at the point of sale,” he says.

Families do not offer their sons and daughters products that they believe may be harmful to their health. They enter through his eyes, through reassuring, funny, surprising messages. They are the solution to problems that do not exist or a synonym for happiness. Catchy songs, drawings, gifts, irresistible offers. Flavors of our own childhoods. The desire to always give the best. Trust in who can reach the consumer. The reasons are as different as the families themselves. The food industry has an advantage: the effects of a poor diet We do not see them (usually) today, but in the future. “If parents come to the supermarket and find a package of cereals with pictures and a Nutriscore B, they think they are buying something good for their children,” says Juan Revenga. Here the specter of individual responsibility returns: nutritional education like those glasses that allow us to go through the supermarket without falling into the traps of an illusion show. But we forget the final trick: economic and material conditions as determining factors for our decisions. Families need both physical and economic access to fresh and healthy food to improve their food choices, which requires real actions that do not seek to please the food industry. “In Spain we need a political class that really thinks about the interests of the population,” says Juan Revenga. The authors of Malnutrition: the silent pandemic: “Only when a nutritious and healthy diet is considered a basic right and people are treated as citizens rather than consumers, will we truly be in a position to end malnutrition.”