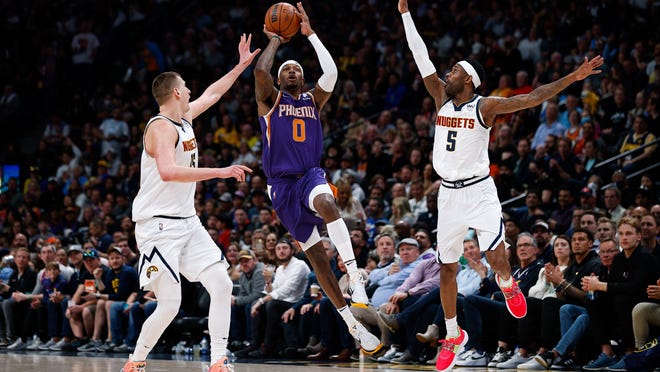 For once, the Sweet 16 was enough.

Arizona men’s basketball deals with a standard of expectation that few programs in the nation contend with.

It’s usually Final Four or bust down in Tucson. Been that way since ’88 when Lute Olson took Sean Elliott, Steve Kerr and Tom Tolbert to Kansas City. Longtime fans tell stories about dancing in the Tucson streets in 1997, the last time UA won a national championship. And the disappointment of the Sean Miller-era is still too fresh to reflect upon fondly.

But this was different.

“When we started the season, nobody believed in us,” Arizona center Christian Koloko said Thursday night after 72-60 loss to Houston in the NCAA Tournament.

“We made them believe in us. I’m gonna thank the fans because they showed us unbelievable support throughout the season. … some people ranked us like fifth in the Pac-12 or something. We overachieved. We won the Pac-12 regular season (title.) We won the Pac-12 Tournament. We got to the Sweet 16.

Athletes says stuff like that all the time. “Nobody believed in us.” But why would anyone have believed? UA came into the season with a first-time head coach in Tommy Lloyd, a guy who spent 22 years as an assistant up in Washington state at Gonzaga.

Their best players were mostly a bunch of little-known foreigners with no NCAA Tournament experience. Guys from Canada, Lithuania and Cameroon.

And there was the improper recruiting scandal that has hovered over the program, bringing a dark cloud to every red-and-blue lining.

“The fan support was great,” Lloyd said of the crowd in San Antonio.

“We obviously have a tremendous fanbase, but it started out a little bit slow,” he said. “There’s a lot of new things in the program. But we proved it. And once we started to prove it, they came out. They really supported us.”

The support was easy to see on Thursday night.

Down in Tucson, the UA football team had a watch party at the Lowell-Stevens Facility. Out in San Antonio, the Arizona fans came out in force, about equal to the number of Houston fans, according to people who were there. And in the Valley, alumni clubs hosted watch parties.

“This is wonderful,” said Matthew Lewis, a manufacturing technician at Intel. Lewis said he is a UA grad who studied journalism before making the switch to the tech sector. He watched the game at The Local Chandler: Sports Bar with the East Valley Cats chapter of the Arizona Alumni Association.

“I always used to be kind of a casual observer; I’ll admit. Unfortunately, I was a fair-weather fan. … Now, I’ve been following every single game. No matter what.

“What made this season different for me, was that after coming off that investigation, that self-imposed lockout of the tournament, I figure expectations are low. We just changed coaches. Everything’s different this year, but also nothing’s different. It’s UA basketball. It’s always gonna be amazing and fun to watch, even if they’re terrible and lose to ASU.

“This year that has not been the case, thank goodness. It’s a lot more fun to watch when they’re winning.”

‘We’re back in the game’

East Valley Cats chapter president Monica Johnston, a data analytics manager for a home health care company, said she expected similar watch parties to pop up all over the Valley, even at places like The Local, which has a reputation as an ASU hangout with photos of Phil Mickelson and Pat Tillman on the wall.

Johnston feels good about the state of the program.

“Compared to the two or three years before, it’s kind of a 180-degree turnaround,” she said. “We’re back in the game. We have a shot at the title, compared to getting eliminated in the first round in 2018 and not really participating the last couple of years. This is huge. It’s getting us back to where we were in the days of Lute Olsen.”

That means expectations will be sky high again soon.

It’ll be back to Final Four or bust.

But for now, for once, the Sweet 16 was enough.

“Overall, it was great,” Lloyd said.

And fans connected with a Kerr, in Kerr Kriisa, who grew up in Estonia, named for Tucson legend Steve Kerr.

And they connected with a Terry, in Dalen Terry, who was born in Tempe, five years after Jason Terry helped the Wildcats to a national title.

And who knows? Maybe it all comes together next season for the team? Maybe it will for the fans, too?

“I’m excited going forward,” Lloyd said. “I want to build it and make it even better. I want our fanbase to be the best in the country. And I think we have the potential to do that. I’m looking forward to rolling up my sleeves this offseason and getting to work on that.”

There’s plenty Moore where this came from. Subscribe for videos, columns, opinions and analysis from The Arizona Republic’s award-winning sports team.