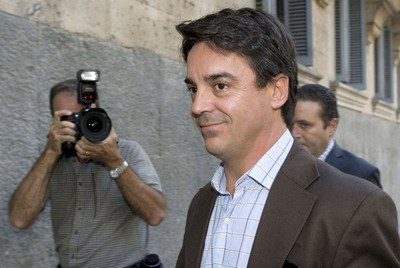 The former councilman of the PP Javier Rodrigo de Santos has been sentenced to two years in prison by the Provincial Court of Madrid for sexual abuse of a prisoner whom he had to protect as coordinator of the NGO Horizontes Abierta. The court has ruled out the testimony of another inmate because it has not been sufficiently proven. The former politician had a criminal record for having abused a minor and for spending 50,000 euros of public money on prostitution when he was mayor in Mallorca. Rodrigo de Santos is an ultra-Catholic activist, father of five children and against homosexual marriage.

The abuses were denounced in 2017. Mohammed Y. and José MS reported to the police that, when they enjoyed these permits, Rodrigo de Santos forced them to have sexual relations under the threat of issuing negative reports about their release if they did not do so. . According to the sentence, it has been proven that the former politician took Mohammed to his home in Alcobendas one night, gave him wishkey and touched him on the penis.

This inmate contributed WhatsApp messages to the cause in which Rodrigo de Santos made all kinds of proposals. The convicted person acknowledges the conversations and that the inmate was at his home, but places everything in a context of mutual “provocation and insinuation”. For the judges, the exchange “exceeds what could be understood as a game”, because Rodrigo de Santos tells him up to 13 times “I love you” and invites him to his bed four times.

Both prisoners were part of the Javier-Vida en Libertad program, to which convicts without social roots in Spain can take advantage of to have a place to spend the night during their leave or their first days of release. Rodrigo de Santos worked as a volunteer in this NGO since 2014. His functions in the organization were to “provide legal advice”. Two years later, he was hired and appointed coordinator of the program, with which he was in charge of managing the four houses in which the inmates slept. At that time, the president of the NGO was Dolores Navarro, who is currently the general director of Integration of the Ministry of Family, Youth and Social Policy and president of the PP in Arganzuela.

The former councilman had morning or afternoon shifts, but on occasions, he changed his hours to cover the night shift. This is what happened on the nights when the two complainants had to go to the shelters.

The fall into the abyss of this ex-politician began in 2008, when his use of public money for expenses in male prostitution was uncovered. He became coordinator of the electoral campaign of Jaume Matas in 2003 and a position of trust of the former minister Ana Pastor. Since 2008, he has lost three battles in court to the force of the evidence. In 2010, Rodrigo de Santos was sentenced to 13 years in prison by the Provincial Court of Palma for abusing minors whom he also tutored in a catechist group in his parish. The Supreme Court later lowered the sentence to five years, considering that it was not clear whether the minor under 14 years with whom he had relations had given his consent or not. The Provincial Court of Madrid has taken into account in this case the aggravation of recidivism and the situation of special vulnerability of the victims. For embezzling funds when he was a mayor, he was also sentenced to two years in prison.

Both in that process and in that of the prisoners of Open Horizons, the former politician has always maintained that the victims lie. For the Madrid court, Mohammed’s testimony is credible “objectively and subjectively”. The court also condemns Rodrigo de Santos to pay the victim 3,000 euros.