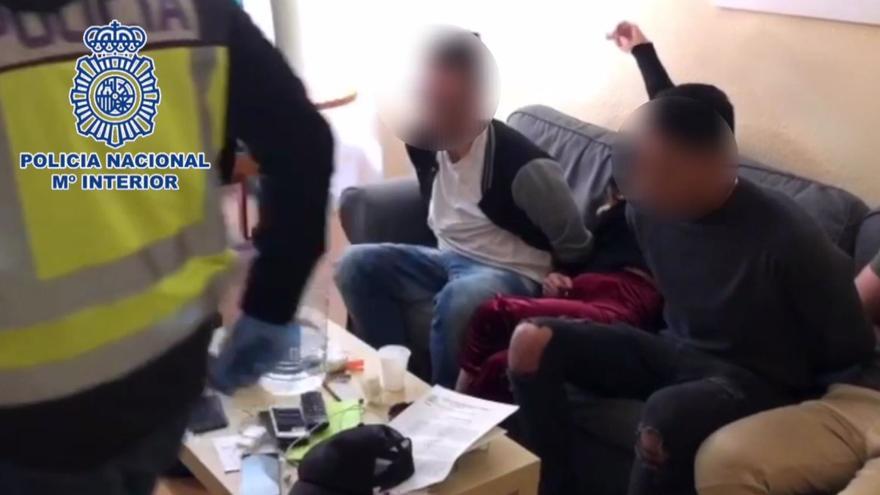 Agents of the National Police Corps four people have been arrested in Alicante after the kidnapping of a young man who had tried to buy drugs with fake money, as reported yesterday by the Provincial Police Station. The captors they demanded 3,000 euros. After holding him to a chair for hours, they kicked and punched him and burned his hands with scissors heated over a fire to pressure him. They are charged with kidnapping, drug trafficking and injury crimes; while the victim is charged with a crime of counterfeiting currency.

The victim is a 19-year-old young man of Italian nationality and that he had stayed for two days in a central hostel in Alicante. The establishment staff detected that the guest had not gone to sleep the second night and had to leave the accommodation. The cleaning staff accessed the interior of the room where they found, among other objects, counterfeit 50 euro bills and narcotic substances. From the hostel, the 091 room was telephoned immediately to alert of the circumstances of the discovery, and a Citizen Security patrol and the Judicial Police moved to the area.

When interviewing the person in charge of the hostel, he gave the officials the material found in the room: six counterfeit fifty-euro bills, a vacuum sealer, purchase tickets from different shops and two cocaine wrappers. At first, the investigations focused on trying to locate the shops where the purchases were made in order to detect the counterfeit money and remove it from circulation.

The agents set up a device around the establishment to arrest the young man and charge him a crime of counterfeiting and distribution of counterfeit currency, trusting that he would have to come to collect his belongings. As soon as he was arrested, he told them that he had just been released by some people who had kept him kidnapped in a house for several hours. The young man told them that he had gone to buy drugs at the house of some acquaintances to buy drugs and that they had had a disagreement with the price. Reason why they tied his hands and feet, they threatened him with a knife, kicked and punched him and they even burned their hands with scissors heated in the fire. At first, they demanded from their father the payment of the ransom from Italy, but when the transfer did not take effect, the captors ended up releasing him to try to get the money. As a guarantee, they kept his documentation, his mobile phone and threatened to kill him if he called the police.

A policeman examines drugs seized in the house.

Investigations determined that the kidnapped youth had tried to pay for the drug with counterfeit money and that they realized the deception. The Police located the alleged kidnappers and after a search at the home they recovered the objects stolen from the victim, while different narcotic substances intervened: marijuana, hashish, ecstasy and cocaine, as well as pieces of counterfeit 50-euro bills and supplies. used in kidnapping, such as scissors, zip ties, and electrical tape. The detainees are four people of Italian and Colombian nationality between the ages of 21 and 33. Among the four there is a woman who is accused of a drug trafficking crime and was released after testifying at the police station; while the other three are considered authors of the kidnapping. The Alicante guard court imposed a deposit of 2,000 euros, that one of them has already paid.

Since last summer, both the National Police and the Civil Guard have intervened in different cases of kidnapping between drug gangs for settling accounts. In July, the Civil Guard dismantled a network of drug traffickers that operated between the Marina Alta and the Costa del Sol and that even kidnapped two of its members, believing that they had stolen a shipment of 400 kilos of hashish. In reality, the drugs had been intervened by the Local Police of Benissa. A few months later, in Catral, the Civil Guard dismantled another organization dedicated to drug trafficking and which kidnapped a man who had deceived them by selling them a 90-kilo bundle of hashish that later turned out to be clay. Likewise, in Torrevieja, the National Police arrested the alleged members of a network of drug traffickers of Swedish origin who kidnapped a man to force his brother to “cook” cocaine for them. The man had chemical knowledge for the cocaine adulteration process, but when the alleged drug traffickers requested his services, he no longer wanted to continue dedicating himself to this activity. The last case was that of this young man of Italian nationality who tried to pay 3,000 euros in counterfeit bills to acquaintances in exchange for drugs. When they realized the deception, they tied him to a chair and began to attack him so that he would pay them.