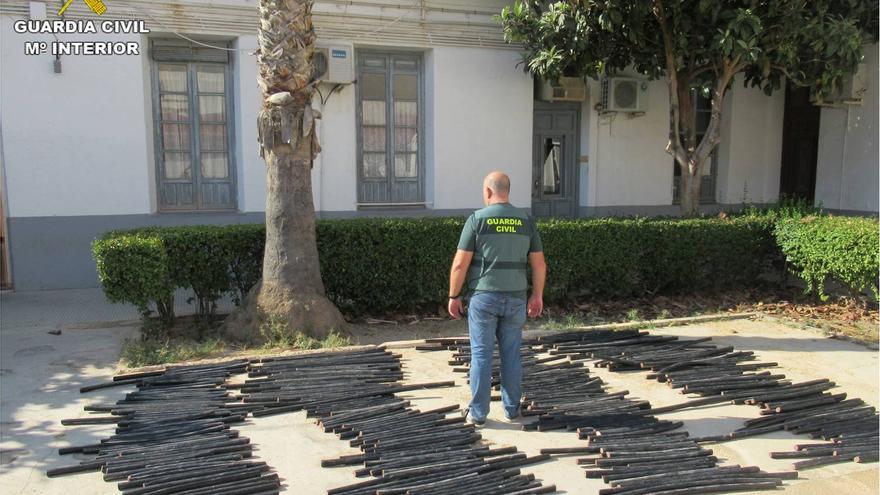 The Civil Guard of San Vicente del Raspeig reports that it detected an increase in crimes of theft of wiring from the facilities of supply of telephony in rural areas from the surroundings of that town, which had been producing since the end of last February.

The installation of this supply network, according to the Civil Guard, is designed in such a way that when a break occurs, the system itself sends a signal to the central. Knowing this extreme, the authors they acted taking advantage of the night, to avoid being discovered. Once they had cut the selected section, before the company had time to notify a patrol to move to the site, they prepared it into pieces approximately one meter in length, and hid them under the bushes. Also, in later days, with a large van, they followed the route they had made by cutting the cable, loaded it, and sold it in two establishments for the purchase and sale of used metals by weight in the town of Alicante.

By cutting sections of cable at different points, and choosing sites with very difficult access, they made it difficult to locate, both the stolen material and themselves, and caused the company greater damage, which sometimes took several days to restore service , thus making it impossible for services as essential as communication with the different emergency services, the operation of the tele assistance for disabled people, alarm systems supported by these networks, banking services, etc., with the risk that all this can pose for the injured parties. The situation was seriously affecting the inhabitants of these rural areas, far from the main population centers, and creating a feeling of insecurity among the residents who live there.

On July 24, the Civil Guard managed to surprise the authors while they tried to load the wiring that they had cut two days before: more than 500 meters divided into 380 pieces. The agents immediately proceeded to arrest the man, while the other person, a woman, fled across the field without hesitation when she was surprised by the acting force. Two days later, on July 26, she was also located and detained. They are charged with the crimes of robbery with force of more than 1,600 kilograms of copper, committed in a period of four months. Both have numerous records for similar events.

The Civil Guard has intervened 500 meters of cabling, the van with which they committed the crimes and various documentation that corroborates the criminal activity. The complainant company has stated that the value of the stolen material added to the damages caused, both to the supplying company and to the customers, amounts to 150,000 euros.

With the exploitation of which it has been called Operation Alcotela, the Civil Guard of San Vicente del Raspeig has clarified 18 crimes: eight theft of copper wire, eight damage to telecommunications facilities, Y two of reception of the stolen materialThese last two were committed by those responsible for the companies that acquired the copper from the cable.

Four people have been detained, three men between 37 and 68 years old, and a woman aged 43 who have been placed at the disposal of the Judicial Authority, which has decreed their release with precautionary measures.