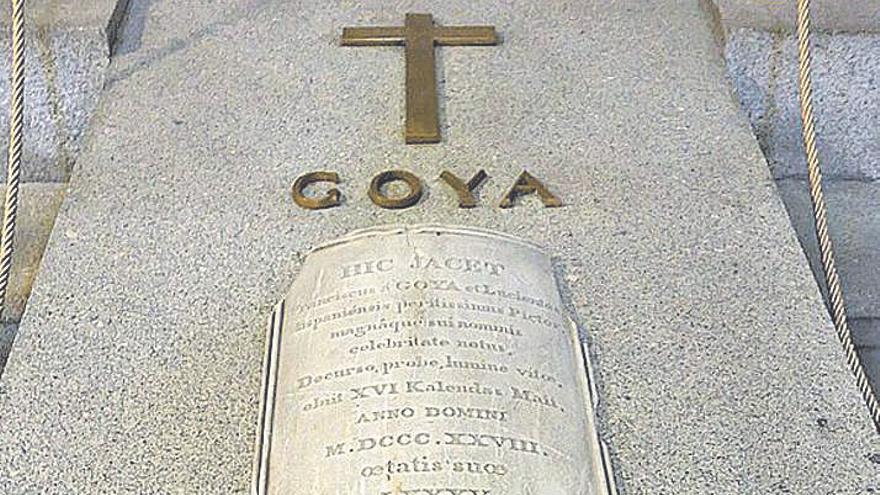 It would not be until the end of that century, specifically on June 5, 1899, when the mortal remains (or, as we will see later, what was left of them) were definitively transferred to Spain (the first exhumation was made in 1888) after the request of the country in some procedures initiated by Joaquín Pereyra (who was the one who alerted of the double burial of the painter) almost 20 years earlier, in 1980, Spanish consul in the French city.

When the original tomb was opened, they found the remains of two people so mixed that it was impossible to separate them and decide which belonged to whom, so Goya’s remains were moved together with those of his in-law and were then located in the Madrid cemetery of San Isidro, in the pantheon of the illustrious together with Juan Donoso Cortés, Leandro Fernández Moratín and Juan Meléndez Valdés. The joint burial is dated May 1900 and it was Joaquín de la Concha Alcalde who designed a structure that also had a sculptural part made by Ricardo Bellver.

Tower that is conserved in the Plaza del Pilar.

However, as if the restlessness that he had in life still accompanied him in death, Goya’s mortal remains barely lasted two decades in that location, since in 1919 they were moved to their final location (at least, today ), in the church of San Antonio de la Florida, whose vault it should not be forgotten, was painted by the artist himself born in Fuendetodos, in 1798. Thus, on November 29, 1919, the remains were transferred in a ceremony to which The Marquis of Torrecilla attended, representing King Alfonso XIII; the Minister of Public Instruction, the Mayor of Madrid (Luis Garrido Juaristi), Eduardo Dato, the Count of Romanones and Joaquín Sorolla, among other personalities of the time.

In it, they say that a parchment, signed by Alfonso XIII, with the following text was introduced into the grave: «The skull is missing from the skeleton, because when the great painter died, his head, according to fame, was entrusted to a doctor for its scientific study without later being returned to the grave or, therefore, found when the exhumation took place in that French city ”

But there is still one more tomb … and it is that the Plaza del Pilar in Zaragoza (in front of the Lonja and next to the sculpture of the painter) has one of the towers that made up the first tomb of Goya in Bordeaux given away by the council of that A city that originally settled in the now-defunct Rincón de Goya in the Grande Park and that is now in the square where, for many of the visitors, it goes unnoticed. Bordeaux, for its part, has a copy that the city of the Aragonese capital gave it.

Oil by Dionisio Fierros, which supposedly portrays Goya’s own skull.

So far the rather busy history of Goya’s bones but the plot twist that has shrouded Goya in mystery since the Bordeaux tomb was opened at the end of the 19th century is still missing, and that is that his head had disappeared. That gave rise to a lot of legends about his skull but the most widespread theory is that it was stolen for phrenological studies, something very common at the time since it was believed that, with the skull, the personality of a person could be studied.

But the vicissitudes do not end here since in the Museum of Zaragoza there is a painting by Dionisio Fierros in which Goya’s skull is supposedly painted, dated … 1849! That would suppose that he had Goya’s head or, at least, that he would have had access to it, which unleashed many legends such as one that said that he was in the Faculty of Medicine of the University of Salamanca where he ended up exploding when making a series practice with her. The reality that seems to be imposing itself is that the inscription on the oil that indicates that it is a Goya skull is probably much later and is no more than an attempted deception, as the Museum of Zaragoza itself collects. . «Everything suggests a sign added later, probably recently and with the intention of revaluing the oil, deceiving. The work was presented (after its purchase) with a great ceremony at the Zaragoza Museum by its donor, Mr. Hilarión Gimeno, a notable personage and benefactor of the Zaragoza Museum. The intention of the apocryphal sign identifying Goya’s skull and above all the hidden intentions of said action, produced at a time of important revaluation of the figure of Goya, remains in doubt ”.

Last year, the story took another turn that is still pending resolution. And it is that in 2019 the body of the essayist Michel de Montaigne was discovered in Bordeaux and, next to his coffin, there was a skull that is unknown whose it may be, which gave rise to endless speculations with which the Goya’s head. It was announced then that DNA tests were going to be carried out without anything else being known about the matter at the moment.

Current grave of the Aragonese in San Antonio de la Florida in Madrid.