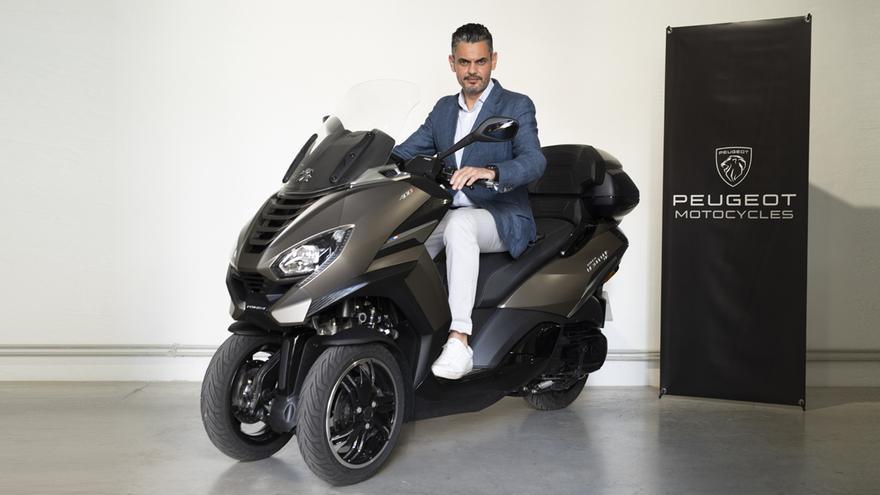 The development of the cities of the future you can’t understandder without the electric motorcycle. The strength of the scooter segment is the key to everything and electrification plays the decisive role in promoting sustainable and modern mobility. Peugeot Motorcycles It is one of the most advantageous contenders in this field and in the coming years it will be essential in the development of this new mobility.

After the pandemic, the sector tries to recover with the arrival of new models and with the presence of a market that fluctuates but that experts predict that it will continue to grow. We chat with him Managing Director of Peugeot Motorcycles Spain, Fran Domínguez, who recognizes that the brand is in the best moment to develop new producers that will have an enormous force in the urban scooter market.

– This year is not being excessively good. What do you expect for this second part of 2021?

– The estimate for this year is that the 2019 figures will be exceeded. The motorcycle market will grow. We build on that forecast. You have to differentiate where the market is growing. In our segment, that of scooters, small motorcycles and three wheels, it is growing by around 15% compared to 2020, which means that it does not grow compared to 2019. It is growing, but not in the private client but in B2B (companies ) and in the case of the small and electric motorcycle in the sharing. This part of the market had a peak when the fleets of cities such as Madrid and Barcelona were launched, and now that peak is accentuated with the renewal of fleets. It is therefore a non-organic growth.

– Do you think the market flow is stable?

– The motorcycle market is directly related to the economy and employment. I am optimistic. It seems that after the pandemic moment the trends point to an economic rebound in a more or less long period. Those periods are good for the sector. Even when? I do not know.

– Because of the range they have, where is there a better commercial level?

– We are very strong in Metropolis, which is the three-wheeled motorcycle. The Metropolis client is a medium-high profile, lives in large cities and with greater purchasing power. Value not only moving but doing it with style and comfort. This customer comes from the automotive sector because it is a motorcycle without a specific motorcycle license, and many people end up coming to this segment. Almost a year ago we released the new generation of the renewed model and we have recently released new versions such as the W and the GT, and we have an offer of a highly technological, connected, powerful and high-performance product.

– But they are also strong at the other end …

– Yes, on the small motorcycle, including the moped. And at that point, in the B2B segment of sales to companies, we are leaders in Spain. We are suppliers of Burger King, of Dominos Pizza, of Carlo. Basically last mile delivery company.

– What future do you see for the electrified motorcycle?

– Our CEO said five years ago in Milan that the project was to launch at least one electric model every year, and we have fulfilled it. This year we introduced the eLudic, an electric L1 moped in collaboration with Bosch. There is a private client version (two seats) and a company version. In 2022 we develop new models and we will release another electric two-wheel model with the latest features, an L1 and then an L3 will arrive.

– There is a very interesting project in the company for the next Metropolis to become electric. Hybridizations don’t make sense on the bike. It is clear that electrification is the key in the development of the urban scooter.

– There are two different segments in the world of motorcycles, totally different. On the one hand there is the small scooter, up to 125 cc, and the moped. For me, that product is going to be 100% electric in a relatively short period of time. Many manufacturers have already eliminated the 50cc. The other segment, the long-haul road motorcycle segment, will cost considerably more. The autonomy of a vehicle will be in the capacity and number of the batteries. It is a matter of storage. This is the case of Tesla.

– But is there already a manufacturer that is daring with it?

– Yes, Zero for example. They are pioneers, icebreakers and they are doing very well. This is an issue that can change when the solid battery arrives, and there will be a door to electrify 100% any type of motorcycle.

– How are your future plans?

– Ambitious. Apart from electric vehicles we are preparing four new models for next year. The message is that we have been investing a lot of money in R&D for a few years thanks to the support of the Mahindra Group. They support us a lot, set goals, let us work and contribute a lot in every way. It is a business group that is very clear about it. They bet a lot on the Peugeot Motorcycles production plant that they have in France in Mandeure and also in their plants in India. In fact, part of our production is going to be done there. Electricity, for example, is made there. The company is very clear about maintaining the French, European spirit.

– Design is important on the bike. Do you understand it like that? Are there designs according to the markets?

– The motorcycle is more universal than the car. Mahindra knows that European design is highly valued around the world, and it is highly respected by it. Especially in Asia and we are also preparing the landing in Latin America and the United States. In countries like China we have fan clubs for the Peugeot Django 125, a very European model. It is an iconic model there, there is even a waiting list. You design in Frankfurt, you produce in Asia with European quality levels. And that is highly valued.

However, the client is very different. You have to be careful with globalization. Product positioning is key. You have to find a niche space, and in Asia that niche is so big that it is almost three times Europe. And we are doing very well. Few products but successful.

– Many times they say that their range is short …

– Will grow. One of the products that will arrive is new and disruptive. A model that will be a flagship. These new models will be more Premium, elevating and repositioning the brand somewhat higher. Our market is not so much that of discount and fight the price, but we seek to provide connectivity, quality, benefits.

– Do you contemplate the option of entering into sharing?

– Not today. But for next year without a doubt. We do not currently have a product for it, but the one due out in 2022 will be perfectly usable. From the manufacturer’s point of view we have two types of customers, the end and the company. Regarding the company, it wants a reliable product, after-sales service and a competitive price, we are. We have that reliability in the models, we have more than 300 service network points, and we are competitive with commercial offerings. As for the end customer, we are a brand with a good reception for its history, with updated European design and style. Even talking about sharing.

– Is autonomy key in the electric motorcycle?

– Depending on how you look at it. The average journey in the city does not usually exceed 20-30 kilometers each day. I think you have to take into account the issue of recharging. The autonomies are marked by the use of the client. What do you use the motorcycle for. And the recharge conditions you have. The same thing happens on the motorcycle. Our e-Ludix has a removable battery and you can plug it in anywhere. 80% of the time you go out with 100% of the battery. If my use is 20 kilometers a day, you can stop charging it one day. It is a balance.

– Is the market for three wheels tough?

– Our Metropolis is different from the models that are now on the market, MP3 or Tricity, they are displacement, prices and different benefits. The customer is not the same. Although it is evolving. It is a good access market that has never ridden a motorcycle, and we are considering entering there as well.

– What do you think of the traffic campaigns that link the motorist with the accident rate?

– The key question on the issue of the accident rate of motorcyclists is to know how many accidents are due precisely to the motorcyclists themselves. There will be a percentage, but there are many who come because a car does not see it (the motorist going properly), a truck turns and does not see it, stops late at a traffic light and attacks the motorist. I think that the accident rates of the motorcycle should be analyzed well. The motorcycle is more vulnerable and that is why it is more present when there is an accident, it usually takes the worst part through no fault of its own many times. The accident rate of the motorcycle is an easy argument, from my point of view.

– What do you think of the motorcycle assistance plans?

– We are not on an issue of emissions. Mobility is the great argument and the motorcycle is a means of transport that is focused precisely on that, to facilitate mobility in cities. It occupies a tenth of that of a car in terms of space, with a very similar utilization ratio, emits 60% less and solves parking problems. There are so many positive variables in the use of motorcycles and scooters in cities that I do not understand why it is not promoted more clearly. At the municipal level I think they also understand it. Generally, someone who gets on a motorcycle gets out of a car. I think you have to promote the use of the motorcycle, either with taxes or bonuses. It would be beneficial for the cities themselves.