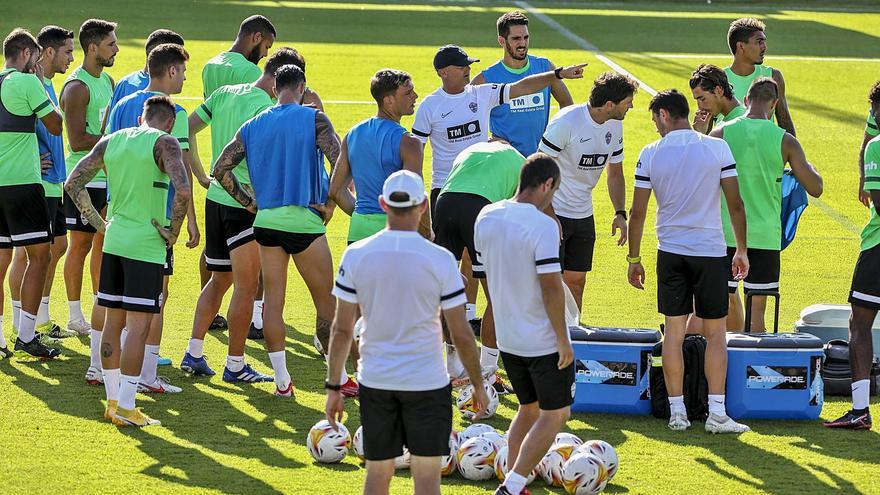 The only footballer who is currently in the infirmary is Diego González, who continues to recover from the muscular discomfort that prevented him from playing last Sunday in Vallecas against Rayo. The player from Cádiz entered the squad and traveled to Madrid, but was one of the two discarded from the list of 25 along with third goalkeeper Axel Werner.

The Cadiz center-back was injured on October 3 as soon as he entered the field of play to replace Gonzalo Verdú. Diego González had been limping during that week and relapsed. But now, after three weeks, he is practically recovered and ready to return.

The Elche squad returns this morning (10.30 am) to training after enjoying a rest day on Tuesday. The intention of the medical team is that the defender gradually incorporates into training and, depending on the feelings he has, it will be decided on Friday if he is ready to enter the call. Everything indicates that he will recover in time.

In any case, it will be Escribá who makes the final decision. The Valencian coach can have at his disposal the 25 players in the squad, so he could choose not to risk with Diego González.

To compose the defense he has enough players. Pedro Bigas is already recovered and last Sunday he completed the match against Rayo. So this week, with more training, he is called to continue in the starting team.

Enzo Roco, who stayed on the bench because he was returning from matches with the Chilean team, is also another alternative. In principle, if there is no change of system and return to the three centrals, between Bigas, Roco and Gonzalo Verdú, the pair that will form the axis of the defense will come out. If one of the three does not come out initially, there will be plenty of substitutes on the bench, where Josema Sánchez will also stay, once Mojica will also return to the starting position.

Given this situation, the normal thing is that Diego González does not force and wait another week. But it was already seen against Rayo how Pedro Bigas went directly from the infirmary to the starting team.

On the previous occasion that there was a week-long match, the Valencian coach rotated a lot and made numerous changes in the matches against Levante, Villarreal and Real Sociedad. It is now supposed to do the same.

Elche will finally play on a Sunday afternoon, although they will do so at home. LaLiga announced the schedules corresponding to matchday 13 and the clash between the Elche and Mallorca team has been set for Sunday, November 7, at 6:30 in the afternoon, at the Son Moix stadium. after the three matches that Escribá’s team is going to play in just seven days. This Saturday against Espanyol, on Tuesday October 27 (7:00 p.m.) in Vitoria against Alavés and on Saturday 30 (2:00 p.m.) against Real Madrid.