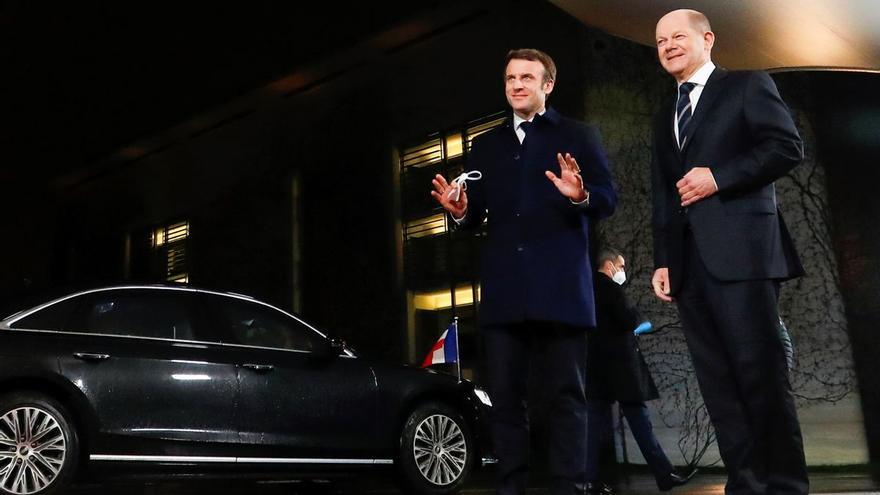 France and Germany have returned to the negotiating table to achieve a de-escalation in Ukraine. Russian, Ukrainian, French and German diplomatic representatives met in Paris on Wednesday. It is the first meeting in normandy format for more than six months, and occurs in the midst of the spiral of tension between the NATO and Russia. It also represents a recovery of the initiative by European countries, after being left out of the bilateral discussions in Geneva between the Americans and the Russians, which only heated up the situation.

In the middle of crossing of declarations between Washington and Moscow On the threat of sanctions against Vladimir Putin, the Franco-German axis tries to open a new diplomatic path to cool down the explosive Ukrainian folder. The meeting in Paris took place two days before a telephone interview between French President Emmanuel Macron and his Russian counterpart. Fifteen diplomats from Ukraine, Russia, France and Germany have participated in it. Its main objective: to pave the way for the celebration in Berlin in the coming weeks of a summit between the leaders of the four countries. “A clear indicator of the intentions of the Russians”

“It is very encouraging that the Russians have agreed to rejoin this diplomatic format, the only one in which the Russians are an integral part. This meeting will give us a clear indicator of intentions of the Russians before the interview on Friday” between Macron and Putin, Elysée sources indicated. “We want a de-escalation, which requires at the same time dialogue and dissuasion. We are having a dialogue on sanctions with European and US partners and thus make the deterrence credible and thanks to that the dialogue is also credible, “they added.

Also Read  Digital rights: the trap of freedom of expression

After the sterile result of the negotiations in Geneva, miracles should not be expected from this Franco-German initiative either. It does reflect, however, discrepancies between France and Germany regarding the erratic management of the Joe Biden administration of this international crisis.

On the one hand, the German government has been very reluctant to shipment of military equipment to Kiev —even the chief of staff of the Teutonic navy had to resign last weekend for having considered the hypothesis of an invasion of Ukraine “stupid”—and he especially fears the Economic sanctions, with a possible suspension of the Nord Stream 2 gas pipeline project. On the other hand, the French consider “alarmists” forecasts of a Russian intervention in the coming weeks.

NATO will transmit before the end of this week its response to Russian demands on security in Europe. “Many Russian requests are unacceptable or unrealistic, but the response identifies some issues where it is possible to work on their concerns,” a European leader of the Atlantic Alliance told AFP. The Western bloc says it is ready to discuss a conventional disarmament, arms control and greater transparency in military exercises.

Instead, Russia demands guarantees that Ukraine and Georgia will not join NATO in the future. In this way, the neutrality of those neighboring countries that it considers to be part of its security cordon would be ensured. A framework that Mikhail Gorbachev believed guaranteed by the promises of George Bush Sr. on the eve of the dissolution of the USSR. But it was undermined by the constant eastward advance of the Atlantic Alliance from the end of the 1990s. According to Moscow, this tenacity of Westerners to put their finger in the eye of the Russian bear justifies the current aggressiveness from Putin’s Russia.

After having concentrated more than 100,000 soldiers near its borders with Ukraine, the Russian army redeployed this Wednesday troops and fighters in Belarus. An increase in military pressure that threatens to lead the Old Continent to one of the worst war crises since the Cold War.