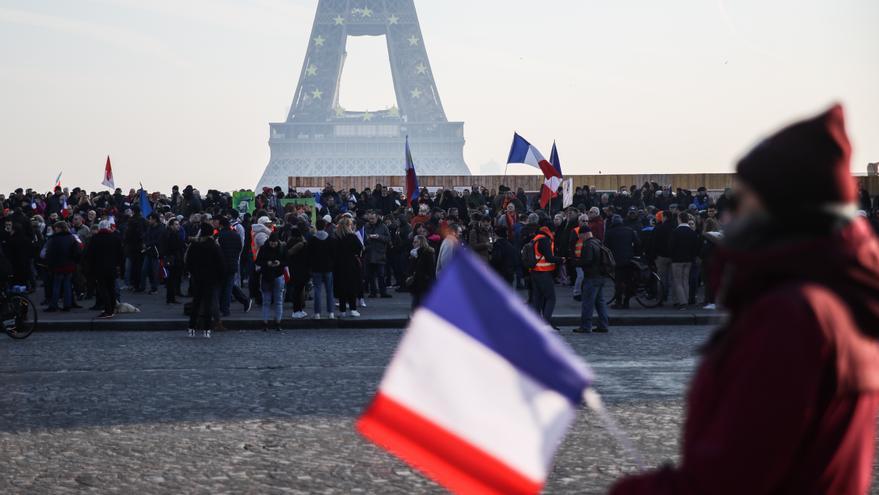 France approved this Sunday the vaccination pass, which will impose important social restrictions on people who do not want to be immunized against covid, in an attempt to force the hand of the almost five million people who reject the vaccine.

By 215 votes in favour, 58 against and 7 abstentions, The National Assembly finished an intense parliamentary process with the Senate, which was rarefied by the political storm that President Emmanuel Macron generated when he said he wanted to “annoy” or “fuck” the unvaccinated.

The law replaces the previous health passport (vaccines or negative test) with one based exclusively on immunization with three doses or two more covid cure certificate.

With the omicron variant causing more than 300,000 cases per day and the vast majority of seriously ill patients being unvaccinated. covid, the Government wants the law to enter into force this week in order to help contain the current epidemic wave.

“With the vaccine passport, France is equipped with a new tool to protect its citizens”, The Minister of Health, Olivier Véran, stated after the vote that he was unable to participate in the debates of recent days after announcing his positive for covid last Thursday.

An appeal to the Constitutional Council

But nevertheless, the socialist deputies announced that they will present an appeal to the Constitutional Council to “guarantee fundamental freedoms”, which may delay the start of the application of the new measure by several days.

Up to now, The health passport provided that, in addition to vaccination, these services could be accessed with a negative test recent, but that option is now removed.

The law has received protests in the streets, but not on a large scale. Just over 50,000 people gathered throughout France yesterday, Saturday. In the one in Paris, convened by a small far-right party, Los Patriotas, there were attacks on two journalists and fascist salutes, as reported today by the Minister of the Interior, Gérald Darmanin.

According to official figures, some 4.9 million French people who can be vaccinated refuse protection, which represents 7.3% of the national population (about 67 million). Meanwhile, 31.6 million third doses have already been administered, indicate the latest data from the Ministry of Health.

The current health passports of those who have only two doses will expire when seven months have elapsed since the administration of the second, unless the person has had the disease in the previous six months. According to this plan, some 560,000 passports were no longer valid yesterday, although there are still no figures on how many people in that group had been vaccinated or were unable to do so because they were recently infected.

These are the main elements of the new law:

– Vaccines – Only those who have complete vaccination schedule with three doses, two doses with a certification of curing the disease in the last six months, or have a medical exemption from the vaccine, will be able to enter cultural places such as cinemas, theaters or museums. The same will happen with the entrance to large shopping centers, as well as to cafes, bars, restaurants or sports halls, as well as access to medium and long-distance public transport.

Also Read  Covid: what are the symptoms so far known of the omicron variant

– Controls – The National Assembly reestablished the principle, which had been eliminated by the Senate, that companies in the affected sectors can request an identification document with a photo of people suspected of carrying a document that is not theirs.

– Sanctions: They also increase the penalties for those caught with a fake vaccination passport, which may be sentenced to a maximum of five years in prison and a fine of 75,000 euros for those who have several forged documents. However, an “amnesty” is provided if the person caught is vaccinated within thirty days.

– Age: the new mechanism will only be applied from the age of 16. Between 12 and 15 years old, the previous health passport will suffice. For minors between 5 and 11 years of age, when there is a disagreement between their parents about their vaccination, the will of only one of them will suffice to immunize them.