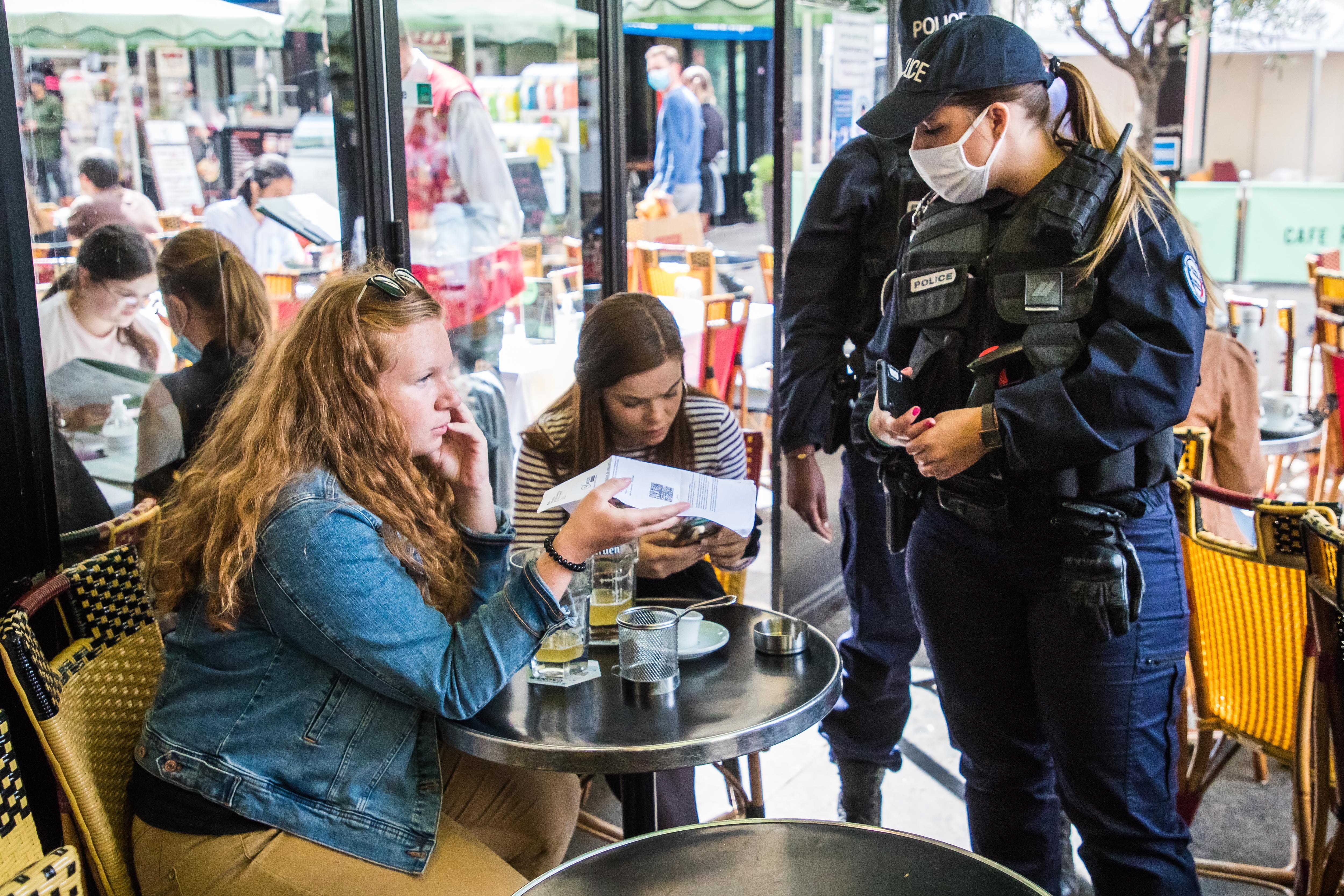 A coffee, a drink, a lunch, even if it is on the terrace. Shopping at a large mall or visiting a nursing home. Travel by long-distance train or plane. Or go to the hospital. Since August 9, the French have had to add a new routine to a large part of their habits: to show the covid certificate for almost every action or interaction in public places, as is already required since the end of July in cinemas, theaters or museums . Despite growing social protests – more than 200,000 anti “health passport” protesters, as it is called in France, every Saturday for five weeks now, even in the middle of August – the Government of Emmanuel Macron says it is ready not to give in.

With foreign tourists still largely unaccounted for by the pandemic and Parisians on vacation, the queue outside the Italie 2 shopping center in southeast Paris is short. As of Monday, it is one of the hundred large French supermarkets that also require proof that the vaccination has been completed, that there is a negative test or that the coronavirus has been passed. At the entrance, some security guards verify quite quickly, through an application on their mobile phones, the QR code of the phone or a photocopy. It works like a traffic light: if it comes out green, go ahead. But if the red one jumps, it means there is something wrong with the certificate and the row gets stuck. On the other side of Paris, in the popular bar and restaurant area of ​​Carrer Montorgueil, Francesco, the manager of an Italian restaurant popular with tourists, knows this problem.

“It’s a mess”The inelegant way of saying chaotic escapes him. “Especially non-European tourists come with some documents, sometimes a photo of a certificate, which the French application does not recognize,” he explains. Still, he says, they are relentless. “We just turned away a client who had only the first dose. He has gone to do an antigen test to come back ”, he says. Pierre Arnoux, owner of a bar in another popular nightlife area, the rue de la Gaîté, has also had to turn down customers, despite how weak the business is in August. In the early days, he says, only half of those who wanted to consume had a valid document. “It’s tough, but I can’t allow them to close me down or get a hefty fine,” he says.

While users who present a false certificate are exposed to fines ranging from 135 euros to 3,750 euros, plus six months in prison if they repeat three times in a month, those responsible for businesses who must demand the certificate risk fines that oscillate between 1,000 and 9,000 euros, as well as an administrative closure.

Arnaux bought the bar on February 18, 2020. Surrounded by theaters and cinemas, they promised to be happy. A month later, the first confinement in France began. At the end of the year, a second lockdown was imposed that would end all theaters, cinemas, bars and restaurants closed for almost seven months. Although it is more laborious, Arnaux prefers to have a covid certificate imposed and to be able to keep his bar open. “A third confinement would be bankruptcy,” he warns.

That is the argument that the Government insistently uses. Last week, Macron spoke of a “collective responsibility” in the face of a pandemic that is still far from over. “It is this or the closure of the country, a new curfew or other confinement,” he warned. The Executive sighed in relief when the Constitutional Council widely validated, at the beginning of the month, the law approved days before in Parliament – not without hard and long discussions and complaints from the opposition – that establishes the COVID certificate and other measures that seek to encourage vaccinations. , especially the mandatory inoculation of health personnel and other professionals in contact with vulnerable populations. As of September 15, those affected workers who have not started the vaccination will be suspended from employment and salary. France is not the only country that uses restrictive measures to encourage vaccination: Italy has also had a “green certificate” since the beginning of the month and New York has become the first American city to require proof of vaccination to enter indoors. such as restaurants, bars, gyms or show rooms.

There are still no official figures on compliance with the new regulations in France, since after a week of “shooting”, only since Monday police controls are carried out. But the fact that the number of covid analysis has skyrocketed is indicative: in the first week of implementation of the certificate, 5.7 million tests were carried out, an “absolute record” since the beginning of the pandemic, according to the station. Franceinfo. In areas such as the pedestrianized banks of the Seine, where temporary beach bars are erected in summer, the City Council has established several points to carry out antigen analysis until late at night.

Catherine doesn’t even wait to be asked for the certificate: she arrives at the restaurant with the code ready on her phone. “I consider it normal, it does not take a lot of time, it is the law and it also allows restaurants to remain open. It seems reasonable to me, ”says this Parisian who has already completed her vaccination. An argument that is not valid for Julie, who looks disdainfully at the queue that forms at the entrance to the shopping center. He has not been vaccinated or plans to do so, he says, for a matter of principle. “I am not anti-vaccine, but I am opposed to the loss of freedom, to being forced to vaccinate, to threats. This is not democracy, ”says this 30-year-old zoo worker who says she goes out every Saturday to demonstrate.

Although their protests are highly mediated, the truth is that in France there are more people like Catherine, the vaccinated Parisian, than like the rebelde Julie. According to a survey published by the Sunday Sunday Newspaper, only 34% of the French say they support the demonstrations or feel sympathy for them, compared to 50% who oppose and 16% who say they are indifferent. Meanwhile, convinced or resigned, more and more French people ask for an appointment to be vaccinated: the prime minister, Jean Castex, announced on Wednesday that 40 million French people have already completed the vaccination schedule (59.6% of the population) and showed confident that, before the end of the month, 50 million will have received at least a first dose, the target set by the Government.