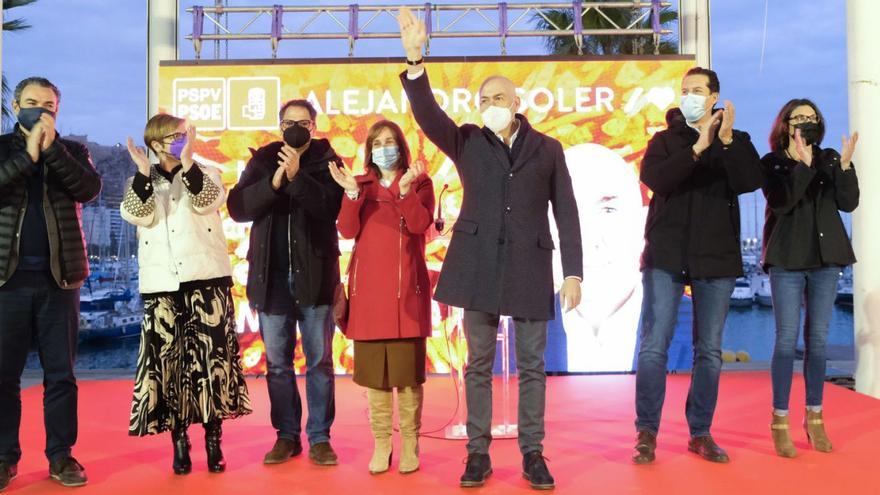 The two candidates for the general secretary of the PSPV-PSOE in the province closed this Friday the campaign for the primaries to be held this Sunday. The national deputy and secretary of the Elche socialists, Alejandro Soler, chose the Panoramis center, next to the port of Alicante, to bring together the militants and officials who support his candidacy, while the mayor of Alcoy and spokesman for the PSOE in the Provincial Council, Toni Francés, did the same in the Espai Ágora of his city. Both burned their last cartridges after a primary campaign that has been very intense, touring the province from north to south, with an eye on Sunday, when it will be decided which of the two will lead the party in the province for the next four years. None of them got out of the established script these weeks and they avoided expressly attacking their opponents. Soler emphasized participation, developing a strong project “that dynamizes the party”, while Francés once again appealed to “build together” a “more united and stronger” party.

The process is open although each candidate plays with his own weapons. Both, as they also did at the end of the campaign, have wanted to demonstrate the support they have from the party’s heavyweights. Alejandro Soler wanted to show off the motto that accompanies him in this campaign, “The strength of militancy”, and brought together more than 500 militants. Among those present, the main guest stars were the mayor of Elda and president of the Valencian Federation of Municipalities and Provinces, Rubén Alfaro, and the alderman of l’Alfàs, Vicente Arques, who spoke at the event. He was also accompanied by the mayors Isabel López (Xixona) and Joaquín Hernández (Dolores), as well as the national deputy Yolanda Seva. Among the attendees were senators Ana Martínez and Pepe Asensi.

For his part, Toni Francés, who has carried the motto “All together, all together, stronger” as his flag, managed to gather more than 300 people in the venue, limited by the pandemic situation. The mayor of Elche, Carlos González, took the stage and asked for the vote for his candidacy. The man from Elche, together with the former mayor of Elche, Diego Maciá, also present, have been the star signings of Francés. In addition, the Alcoyan alderman was accompanied, among others, by the regional secretary for Cooperation, Toñi Serna, and the mayors Irene Navarro (Petrer), Andréu Verdú (La Vila Joiosa), Jesús Villar (San Vicente del Raspeig) or Enrique Moll (Pego) , together with former senator Ángel Franco and a part of his sector in Alicante.

Toni Francés, with representatives from all the regions, including the mayor of Elche, Carlos González, and former senator Ángel Franco. | JOHN RUZ

In this context, Alejandro Soler called for “listening” to each of the groups so that “no militant is left alone.” The national deputy asked the militancy to support his project on Sunday so that the party “gains strength, dynamism and greater projection towards the public.” The man from Elche encouraged the militancy to vote “freely” next Sunday, as he has been claiming since the process was opened.

For his part, Francés, in an act in which fourteen socialist militants took part and where several videos were projected supporting his candidacy, among them, that of the current director of Casa Mediterráneo and former socialist parliamentarian Andrés Perelló, of the Socialist Left current. The mayor of Alcoy stressed that his project is one of “unity, team building and coordinated work.” He also advocated opening the party to the participation of the militancy, “that connects more and is capable of creating powerful social leadership,” he said. And he called for an “updated” provincial structure, with more resources for the regions and local groups “to help strengthen the governments of Pedro Sánchez and Ximo Puig.”

Also Read  Macro farms, in the target in the US

The militants will have the last word on Sunday to choose the person who will lead the formation. The polls will close at 8:00 p.m.