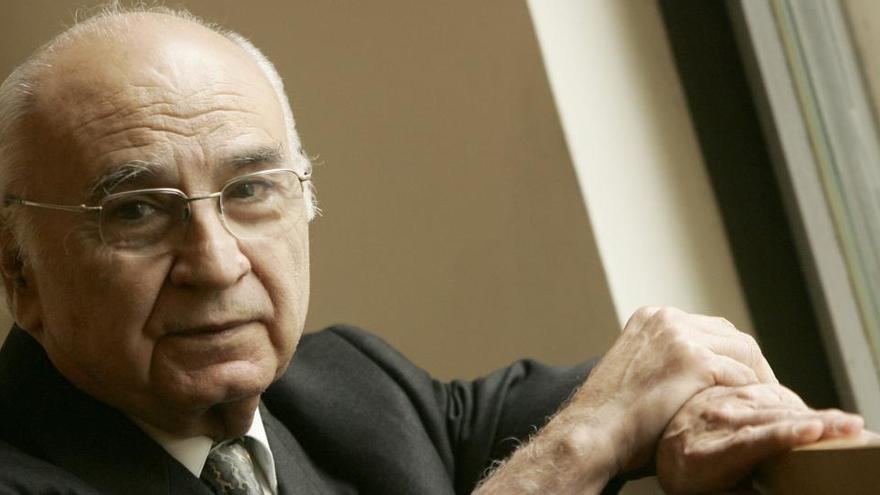 The Valencian poet Francisco Brines, awarded this Monday Cervantes Prize 2020, is one of the last living representatives of the generation of 50, and known for his defense of poetry as an exercise in tolerance.

After studying at the Jesuits of Valencia, he went through the universities of Valencia, Deusto and Salamanca to obtain a degree in Law and the one in Madrid to study Philosophy and Letters.

His poetry is characterized by the melancholic tone of his verses. He oscillates between the gloss of his native land and the care of the beauty of his verses. The main theme of its production is the passage of time, the decay of everything alive, the degraded condition of the human being subjected to its limitations.

He has been described as “a great metaphysical poet” and part of his production forms one of the vertices of Spanish poetry of the second half of the 20th century.

His first book, ‘Embers‘, was published in 1959 and won the Adonais Prize with it. He then posted ‘Words in the dark‘(1966), which earned him the award with the National Critics Award in 1967. This same year he also won the Valencian Literature Award.

In 1987 he received the National Prize for Literature for ‘The autumn of roses‘(1986), one of his best known and most popular books, made up of sixty poems written over ten years.

The following year he entered the theatrical world and revised and adapted the text of ‘El alcalde de Zalamea’, whose version was released in November of that year by the Classical Theater Company, and directed by José Luís Alonso.

In 1990 he presented together with other members of poetic generation of the 50s, the book ‘Encounter with the 50’. In that generation there are also poets such as Jaime Gil de Biedma, José Ángel Valente, José Agustín Goytisolo or the novelists Rafael Sánchez Ferlosio, Ana María Matute, Carmen Martín Gaite, Luis Martín Santos and Luis Goytisolo.

In 1998 he was recognized with the Fastenrath Prize awarded by the Royal Spanish Academy for his work ‘The last coast’ (1995), a melancholic work in which he recalls his childhood.

And in 1999 he received the National Prize for Spanish Letters for his entire poetic work. A year before he had published his ‘Anthology’.

Elected member of the Royal Spanish Academy of the Language in April 2000, it happened to occupy from April 2001 the chair ‘x’ left vacant by the late playwright Antonio Buero Vallejo.

He entered the institution on May 21, 2006, with the speech ‘Unity and personal proximity in the poetry of Luis Cernuda’, one of the poets who have most influenced his verses.

Shortly afterwards, he was awarded an honorary doctorate by the Polytechnic University of Valencia in the academic opening ceremony of the new 2001-2002 academic year.

In 2003 he published ‘La Iluminada Rosa Negra’ and a year later, ‘Amada vida mía’. “I try not to publish any poem that I am not satisfied with,” commented the author before remembering that when he sees the light it is no longer his “but the reader’s.”

In 2010 he won the Reina Sofía Prize for Ibero-American Poetry, which recognizes the relevant literary contribution to the common cultural heritage of Ibero-America and Spain, made by a living author.

In 2008 it was published the anthology ‘All the faces of the past’, a selection of his poems. He has also published the essays ‘Encuentro con los 50’ (1990) and ‘Escritos sobre poesía española: De Pedro Salinas a Carlos Bousoño’ (1995).

In October 2013, a score of poets, teachers and scholars of his poetry paid him a tribute in Seville and described him as ‘one of the most influential Spanish poets’ of the last century and what we have of it.

Brines promoted in 2019 the creation of a foundation that bears his name and that will award two literary prizes, one in Spanish and the other in Catalan, which will serve to preserve his legacy, a library of some 30,000 volumes as well as his art collection.