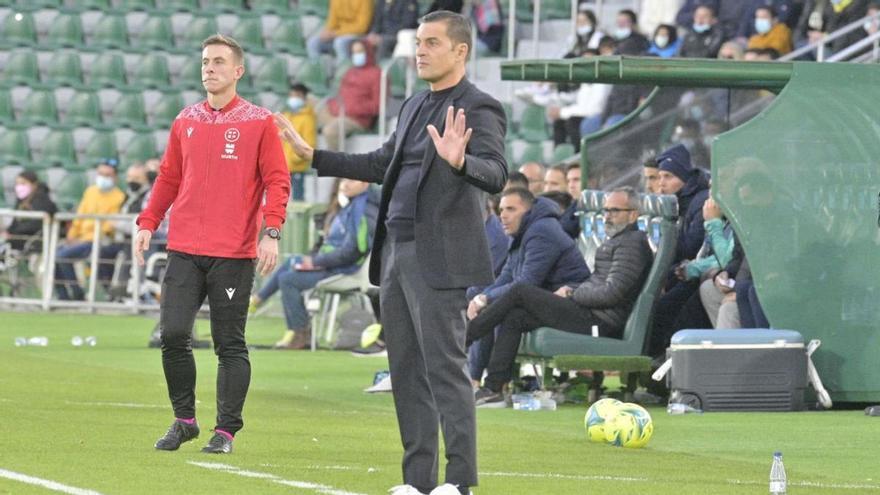 Soccer are goals and victories. When the ball goes in and the wins are achieved, everything looks different. In that sense, Francisco Rodríguez, Elche’s new coach, has fallen on his feet and that always helps to develop the work and instill new ideas in the players.

On Thursday in the Cup he completed the procedure against Leoia (0-2) and the real litmus test was last Sunday against Cádiz. Things couldn’t have gone better. The franjiverdes they added three points that allow them to leave their relegation places and face the future with more optimism.

It wasn’t a brilliant match, but the important thing was the result and it was achieved. The Almeria coach has achieved, which in most cases is common when there is a replacement on a bench, to provide the Elche team with more intensity and more attitude. Something essential to be able to achieve the objectives.

ENERGY: His attitude on the bench is reflected on the field

Each coach has his style and there have been many cases of coaches who have achieved results from calm and without gesturing much on the bench. But, normally, teams are usually the reflection of their coaches and the energy that Francisco showed from the side was translated on the field of play.

Unlike Fran Escribá, who spent a good part of the games sitting down and hardly transmitting instructions, the new franjiverde coach was on his feet from the first minute and trying to prolong all his energy on the field. Did not stop correct positions, cheer and applaud your players in difficult moments. To ask for peace of mind when it was necessary and to celebrate with his assistants and his players the goals and the final victory. He has already repeated it in the two press conferences he has offered: “We hope to be able to convey to the players the illusion that we bring.” For now, at the first of change, he has succeeded.

MORE AMBITION: Offensive changes despite going ahead on the scoreboard

Another of the things that Escribá was accused of was being too “amarrategui” when he got ahead on the scoreboard. On this occasion, although it must also be analyzed in its proper measure because Cádiz is not a rival from the upper part and has been the weakest that has happened this season for Martínez, Valero, Francisco was brave. With 1-0 he did not put the team back to defend and always wanted to look for the second goal. The pressure line was, almost always, in the opposite field. Also, the changes he made were offensive.

Gumbau replaced Marcone and the Catalan has more upward travel than the Argentine. Pere Milla, who is a forward, placed him on the wing in place of Fidel to take advantage of his bravery and speed. The only more defensive swap was that of Josan for Lucas Pérez, but, from that moment on, Pere Milla was placed as second striker. In addition, in the last minutes he could have chosen to reinforce the center of the field with Raúl Guti and decided to take out two born forwards such as Guido Carrillo and Benedetto, winking at the two Argentines and showing them that he has them, by Lucas Boyé and Tete Morente. We will see if against more important rivals it continues with the same ambition.

PRACTICAL: Without complicating when defending and getting the ball out

One of the first goals that Francisco announced that he wanted to improve was defensively. The Almeria coach had reviewed the previous matches and had verified that “up to six or seven goals” had been produced by individual errors. In front of Cádiz, fortune allied with the franjiverdes, because they continued to be produced. The penalty came, first for not overcoming Iza Carcelén so that she would not shoot comfortably; later, by a bad clearance by Edgar Badia. And Choco Lozano also beat Enzo Roco’s back. Even in the Cádiz goal (2-1) Álex Fernández could be better covered so that he did not finish off. Surely Francisco and his assistants have all this written down in red in the notebook.

What we did see was an Elche who, although, at times, wanted to start the game from behind, it was more practical, it was not complicated when defending and when he felt overwhelmed he had no problems when sending balls up for Lucas Boyé and Lucas Pérez to fight. Another of the premises was not to clear balls towards the center to prevent the opponent from mounting counterattacks, as had happened in previous matches in which goals were conceded.

Improving the defensive system is one of the main obsessions of the franjiverde coach and surely he was very angry with the Cádiz goal, because he would have liked to leave a clean sheet. But at least a first step was taken to improve.

ENVIRONMENT: Improving from a good result is always positive

As Francisco recognized at the end of the game, for a coach to start a new project with a win is “extremely important.” Elche beat Cádiz and took a long step towards its goal, but the Elche team still have many things to improve. In addition to defensively for when he faces more important rivals, in the center of the field he must also have more personality. The double Mascarell-Marcone pivot helps contain the opponent’s game. However, at the beginning of the second half of the match against Cádiz, a player with personality was missing, who put the team on his back and was able to handle the ball in the center of the field. Raúl Guti is called upon to develop that role, but the Zaragoza native is not having a good time.

There is time ahead and from the peace of mind a good result can be achieved. What is clear is that in his first week at the Elche club, Francisco has brought fresh air and has changed the mood of the players, fans and managers. Time will tell.