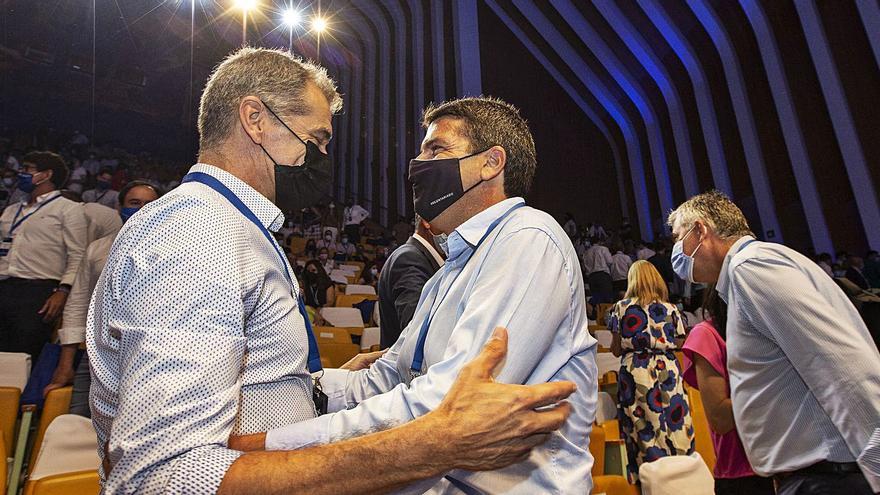 The brand new leader of the popular Valencians, the Alicante who landed in politics two decades ago sponsored by Zaplana, took refuge for ten years in the Chamber of Commerce and returned in 2019 as head of the Provincial Council, to now, finally, fulfill his dream of take the helm of the PPCV, yesterday bet on transmitting with images the axes on which the new stage will pivot. The “leitmotiv” of the argument on which he underpins this era, the era of his presidency. He did so within the framework of the celebration of the XV regional congress of the party, his long-awaited enthronement ceremony. A gala in which a video was broadcast with the air of an electoral campaign that reflects popular demands of yesterday, today and forever. A recording in which Mazón, the fan of boleros and rancheras who one day fantasized about representing Spain in Eurovision, shows that he not only gives the cante, but also acts as the protagonist. And he does it in the purest style of his battle partner Toni Cantó, who suddenly burst into his coming-out to wrap up the formation that until a few months ago he put back and a half.

The president of the CEV, Salvador Navarro, and Nuria Montes, from Hosbec, in the auditorium. | ALEX DOMÍNGUEZ

The Palau de Les Arts Reina Sofía, framed in the imposing enclosure of the City of Arts and Sciences, was the setting chosen to anoint the rise of the politician in which Genoa has placed all its hopes to regain power in the Community. An avant-garde building that for some evokes the excessive ambition of past times, but that the Valencian PP claims as a legacy of its years of glory, of the drive for the modernization of the capital of the Community. A complex around which long queues formed early in the morning to accredit those attending the event that, rather than staging the ratification of Mazón as regional president of the party, it was the starting gun in his career to compete for the conquest of the Palau. The reconquest of the Valencian PP.

The mayor of Madrid, José Luis Martínez Almeida, was one of the most photographed by the militancy. | ALEX DOMÍNGUEZ

The protagonist arrived at what has been his most important political appointment at the edge of 10.15 am, acclaimed by militants who went out of their way for a selfie and accompanied by his “faithful squire” María José Català, as she defined herself. The same one that minutes later told him in public: “Only you” could be the chosen one, in an obvious nod to the title of the bolero that Mazón sang with his group, Marengo. The Alicante-born man could not help but get excited when he entered the auditorium and was cheered by the thousand people who were waiting for him, those who received him with ovations, applause and gestures of affection such as that of Macarena Montesinos, the national deputy who sponsored him in the beginning back in the nineties. Among them were the 847 delegates who, as one of those who ended up forming part of the executive committee confessed, were unaware of the distribution of positions in the new organization chart. A low-key secret that Mazón revealed at the last minute, announcing the appointments one by one, loudly, energetically and amid applause. First the position and then the lucky one, like a child from San Ildefonso on December 22, singing first the number and then the amount awarded.

The president of the Council of Chambers of the Valencian Community, José Vicente Morata, and that of the Chamber of Alicante, Juan Riera. | ALEX DOMÍNGUEZ

The auditorium, the venue in which the PP anthem resounded a thousand times, not only concentrated guests with a militant card, the black leg of the formation in the Valencian Community, but also brought together a large group of social representatives of the territory. From the president of the CEV, Salvador Navarro, and the president of the Council of Chambers of the Valencian Community, José Vicente Morata, to the highest representative of the Alicante Chamber, Juan Riera, also passing through Marián Cano, from Avecal; Nuria Montes, from Hosbec; Cristóbal Aguado, from Asaja; Manuel Miñés, manager of the Chamber of Contractors, or Ismael Sáez, from UGT-PV. The projection interpreted by Mazón was also directed at that group, which begins with the new president of the PPCV touring barren crop fields, presumably due to the lack of water for irrigation, and which intersperses images of the Tajo-Segura transfer infrastructure one of the strategic lines of his speech. In the production, the man from Alicante is also shown helping a hotelier to lift the blind of a bar without activity. They are sequences that are interspersed with appearances of the regional leader in different municipalities of Alicante, Valencia and Castellón; all a nod to the importance of the structuring of the territory and a way of marking its own profile against the policies of the Valencian left.

Carlos Mazón embraces the one who will be the president of the PP Balear, Marta Prohens. Alex Dominguez

Yesterday was undoubtedly a day of emotions, especially for those who rise in the organic ranks of the party and, probably, of mixed feelings for others, who certified that their stage, at least for the moment and in the regional square, is already part of the past. This is the case of Isabel Bonig, who was moved by hearing words of gratitude and farewell from her successor, surrounded by the army that until a few months ago defended her reign and who has seen how they have dropped her to praise Mazón now. The former president of the PPCV, the one who was a trustee in the Cortes when too many party gulls were hovering around the corruption dump, was applauded. He did not speak, but he had the opportunity to look Pablo Casado in the eye, who gave the coup de grace to his aspirations and ended his career in the Community in favor of Alicante.

José Manuel García-Margallo, casting his vote in the ballot box, during the congress held in Valencia.

The landing of the almighty national leader of the PP in Valencia was announced. Everyone knew that Casado would attend, but his arrival at the venue caused such a stir that it overshadowed one of the key moments of any political congress, the one in which the foundations of what will be the new journey are laid. The national president of the party made an appearance just at the moment in which the mayor of Alicante, Luis Barcala, and the spokesperson of the PP in Castellón, Begoña Carrasco, presented the central presentation, the one called “The Community in the center”, that that puts the focus in the center to fish in the Cs fishing ground and mark distance with Vox. When the initial approach had barely been exposed, when the matter had not yet been entered and the message of the need to claim freedom against the sectarianism of the left had only been launched, there was a stir. The most popular anthem among the popular ones sounded for the umpteenth time and the mayor of Madrid, José Luis Martínez Almeida, appeared first, followed by Pablo Casado. With this, the madness of the followers, the body contortions get the precious photo. Among the renowned attendees were also the general secretary and close friend of Mazón, Teodoro García Egea; the president of Murcia, Fernando López Miras; the former minister and today MEP José Manuel García-Margallo; Esteban González Pons, also MEP; the mayor of Zaragoza, Jorge Azcón, and the one who will become president of the PP of the Balearic Islands, Marga Prohens.

The former president of the PPCV, Isabel Bonig, says goodbye to the position and dedicates gestures of affection to the militancy. Alex Dominguez

At that point, with an hour delay depending on the programmed script, and when Mazón and Casado had not yet intervened, the president of the popular conclave, the former head of the Consell Alberto Fabra, invited Barcala and Barrachina to finish their presentation – in fact, it was the third time that he had claimed it – and he gave voice to some of the militants who had presented amendments to the presentation, one of whom monopolized all the attention by denouncing the breach of the PP statutes and demanding self-criticism.

The programming was accelerated to give visibility to the leader, to give the floor to Mazón, who when he took the stage received a message from his team through a poster that indicated that he had no time limit, that he could expand as he wanted. It was his moment, the one he had waited for so long.

The new popular president of the Valencians concluded the day as he began it, with an authentic mass bath, this time on the same stage of the auditorium, surrounded by hundreds of people crowded together and eager to congratulate him, for portraying him with their telephones; to the point that the organization asked to be evicted for obvious reasons, because Mazón’s dream came true while he was in a pandemic.

Toni Cantó makes a cameo in Valencia to dress Mazón

With Toni Cantó you never know, anything is possible and yesterday he showed it once again by appearing at the XV PPCV congress. The one who was trustee of Cs in the Valencian Courts, the one who combined his speeches with attacks on the Valencian PP, is now at the feet of his former adversaries and his script twist has been rewarded. As far as is known, he is not yet a member of the PP, but his signing as head of the Madrid Spanish Office has already borne fruit. If he was already praising Ayuso and Casado, now he was also praising Mazón. And it’s only been three and a half months since his last change of sides.