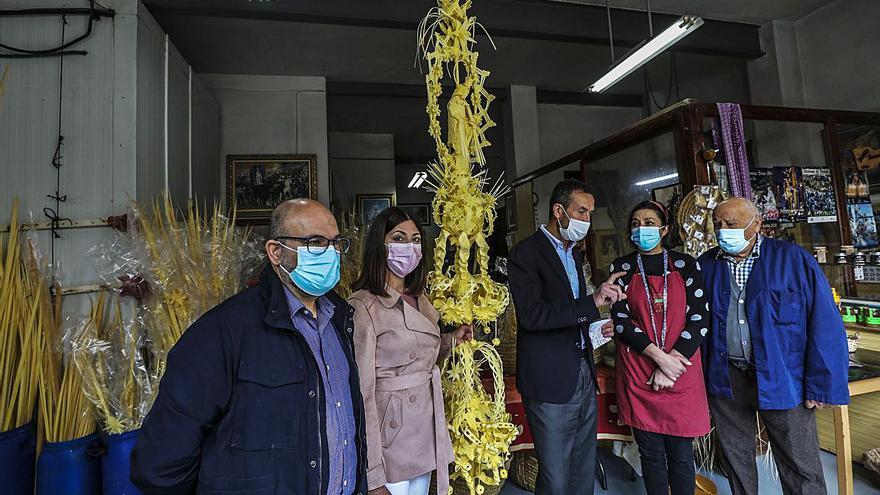 Among the gifts, Queen Letizia will be the only one to receive a handicraft bouquet, the same one that was planned to send her in 2020. As shipments were ended up being suspended due to the epidemiological situation, this palm has been stored all year in a refrigerator and it is the only one of these dimensions in good condition. Specifically, it measures three meters and in the bouquet the Miraculous Virgin is represented. It was planned that this past Wednesday this detail from Elche would be sent to the Royal Household.

Unlike other editions, the rest of the personalities will be presented with a smooth palm and not a handicraft, as explained yesterday by the mayor, Carlos González, during a visit to the Serrano Valero family workshop that prepared and has guarded the queen palm. The first mayor pointed out that “despite the difficult situation that we are going through due to the pandemic, we have not wanted to stop complying with tradition”, and in turn insisted that the production of white palm is a long, laborious and totally artisanal process ” which has disappeared from the rest of the world and is practically only preserved in our city. The rest of the smooth palms will be sent to Pope Jorge Mario Bergoglio, to King Felipe VI, to the Prime Minister, Pedro Sánchez, to the President of the Generalitat, Ximo Puig, to the Bishop of Menorca and former parish priest of Santa María, Francisco Conesa, to the Mayor of Jaca, (city twinned with Elche), Juan Manuel Ramón Ipas, and the Bishop of Orihuela-Alicante, Jesús Murgui.

Paquita Serrano, spokesperson for the Serrano Valero family, pointed out that people are responding by buying palms “and we appreciate the signs of support, but I ask for caution, that there are no crowds”, in relation to the entrance to Holy Week. Francisco Serrano, recognizes that last year the entire season was lost and in 2021 they have sold 20% of the one they saved, although he explains that some copies last longer than others in the cameras. He also points out that on his farm he has expanded the cooling area to increase capacity. He also hopes that the tradition of putting palms on balconies will continue.

From the City Council they also expect it, since these days from the Department of Festivities a campaign has been launched for residents to help the sector by buying palms and remember Palm Sunday in a different way. The councilor from Elche also pointed out again this Wednesday that the sector will be supported for the second consecutive year with direct subsidies worth 100,000 euros to alleviate the serious economic consequences caused by the cancellation of Holy Week due to the health crisis. .

Regarding the debate on the Palm Grove Law in the Cortes, the first mayor said this Wednesday that the position of the local government is unequivocal because the law has to shield the Palm Grove against the construction “and that it is from considering rural land what We leave it up to what the parliamentary majority decides, but the result of the positions has to be the legal shield “so that there is a” smooth “but” unstoppable “recovery of the Palmeral, and that it comes accompanied by financing from other administrations such as the autonomic and central.